Art Of The City

For at least a hundred and fifty years there has been a perceptible link between music and the visual arts. From the 1950s onwards the bond between the two art forms became even more entwined. This is how art found its way into Newcastle’s night clubs in the late fifties and sixties: –

If you grew up in the northeast and enjoyed Newcastle’s night-life in the sixties you’re probably aware that Mike Jeffery was the owner of the city’s iconic venue – the Club a’Gogo. Many more music fans from that era will know him as being the man who managed the Newcastle band, The Animals back in the mid 1960s and the Jimi Hendrix Experience a few years later. What’s less well known are the details of his musical career before he struck gold with those two acts. Before Mike Jeffery launched The Animals in 1963, his life revolved around the management of a number of clubs he owned in Newcastle upon Tyne. Over the years as his wealth increased he acquired more clubs in Mallorca and Paris.

Mike Jeffery was an amateur musician and a music lover. His career as a music entrepreneur started in the late fifties and stemmed from his enthusiasm for jazz. It’s no wonder that the first clubs he ran in Newcastle echoed his musical tastes and featured both “live” and recorded jazz.

Mike Jeffery had a ready market for his early clubs. In the late 1950s and early 1960s a lot of teens and twenties, in particular university and college students, were turning to traditional and modern Jazz as an alternative to other forms of popular music that were around during that period. The way jazz, and in particular modern jazz, was being packaged gave the genre an aura of sophistication; an art form in a league way above commercial music. Albums from the late fifties and early sixties aimed at the pop market invariably featured just a photograph of the artist(s) on the record sleeve. Jazz labels were taking a more radical approach to draw attention to their albums by using modern and contemporary art for their album covers. 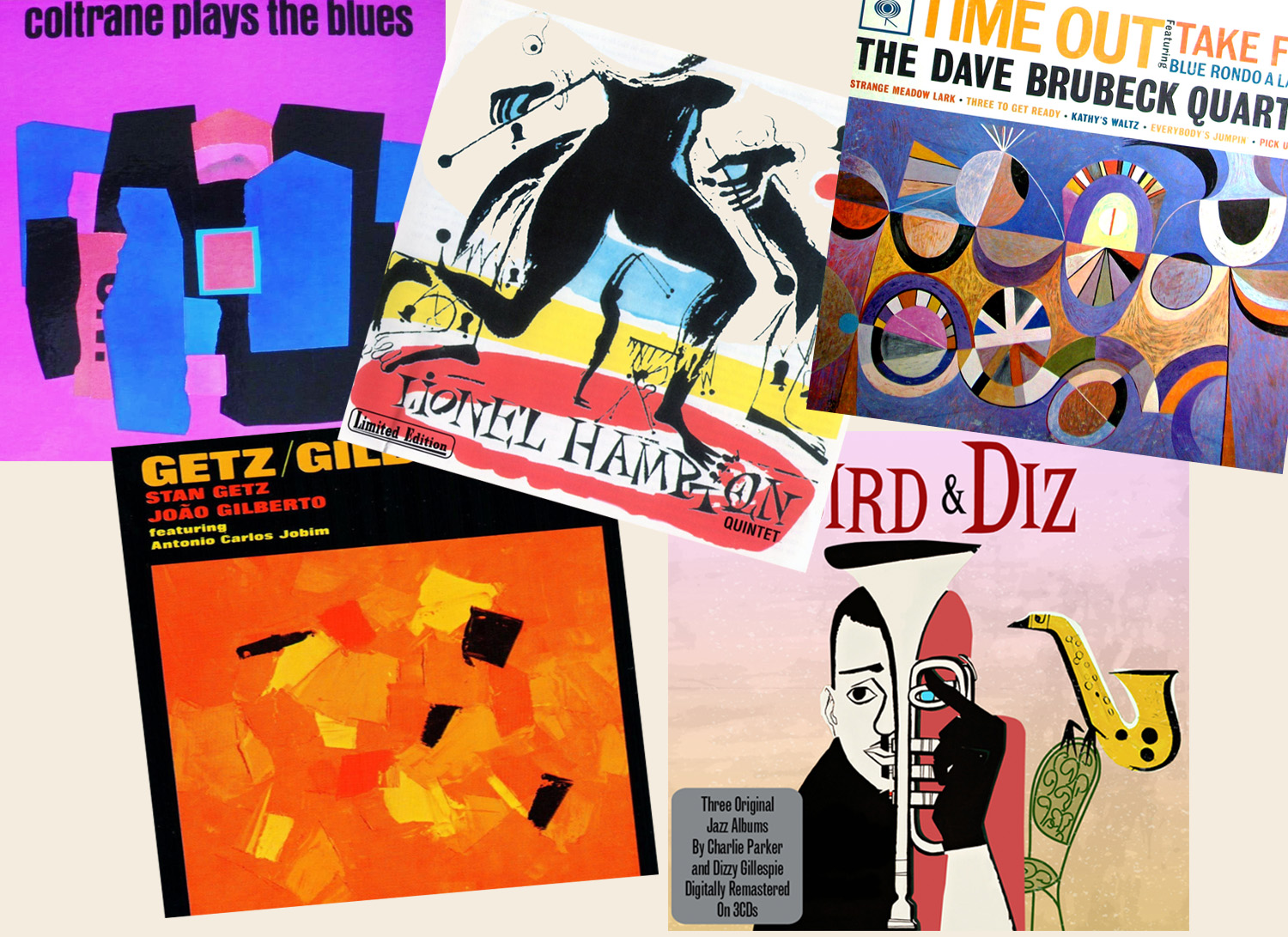 Whatever the appeal of jazz, it was packing young people, especially the rebellious types into the many jazz clubs that were springing up throughout the country. But Mike Jeffery wasn’t content to own just any run-of-the-mill club; he wanted his clubs to be on a par with the up-market jazz clubs he knew in London.

His overall vision was to focus on good music but also to include the use of eye-catching graphics and visual art on posters and flyers to attract a mixed clientele to his establishments. Once they were in the club, he would ensure that his customers returned by offering them an exciting atmosphere and ambience to enhance their listening experience. Perhaps inspired by the graphics displayed on jazz albums, his intention was to use modern art and contemporary design in his clubs, which would include murals and paintings.

In 1959 Mike Jeffery opened the Marimba Coffee House, his first Newcastle venue. The Marimba was a coffee bar by day and a late night jazz club after dark. As for the décor, he turned to someone who he thought could create eye-catching designs for his venture. Enter Scott Dobson, a Newcastle artist, art & music critic and writer. Scott Dobson also taught art at Atkinson Road Technical School in the city. Scott Dobson designed the murals on two of the three floors of the Marimba. One of the murals consisted of a large mosaic made of broken crockery, the construction of which Scott sub-contracted to some of his art students.

Left: Scott Dobson’s students work on the Marimba’s ground floor mosaic. Right: The painted mural in the basement of the Marimba (also known as “the Crypt”)

Mike Jeffery’s next Jazz club was the Downbeat Club in Carliol Square, Newcastle, which opened in late November 1959. The décor for this club was designed by an art college student named Joe Pharoah who was a friend of Eric Burdon. Scott Dobson provided some of the modern paintings that hung on the club’s walls.

Unfortunately, the Marimba Coffee House was destroyed by fire in November 1961 but the insurance payout ensured that Mike Jeffery had the funds he needed to fit out his next jazz club; the Club a’Gogo on Percy Street, Newcastle. Mike Jeffery pulled out all the stops for the décor in his new club, which opened in July 1962. 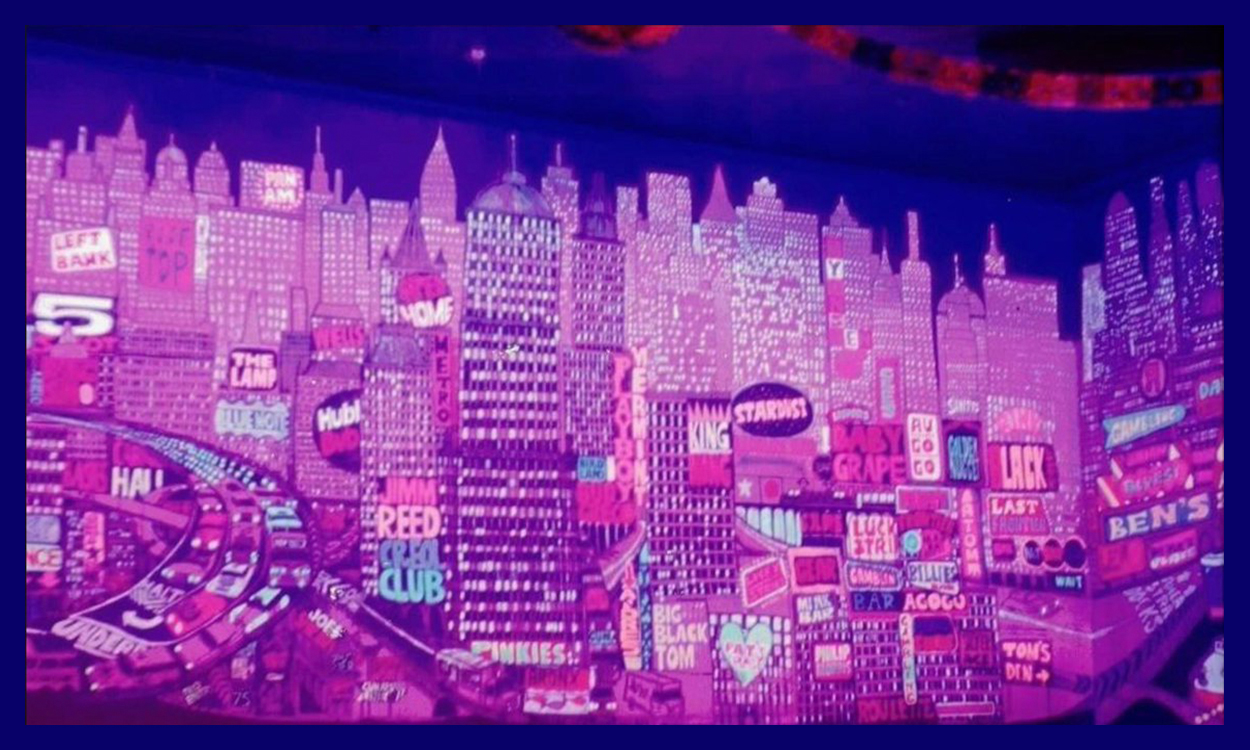 The interior of the Club a’Gogo was designed by Eric Burdon who had been an art student before his music career took off. When it first opened, the club had two separate rooms – the Latin American Lounge and the Jazz Lounge. The Jazz Lounge was adorned by a large mural depicting a city skyline, which extended over two walls. This was painted by David Sweetman who was studying fine art at Kings College in Newcastle. He was helped by various Club a’Gogo employees. Eric Burdon was responsible for some smaller wall paintings in the Latin American Lounge (later renamed “The Young Set”).

After the Club a’Gogo had been running for some time, jazz began to lose its appeal for young people. Jazz bands were phased out and by the end of 1963 live jazz had been replaced with appearances by the best Rhythm & Blues and rock bands around. This marked the beginning of the club’s “golden era”. During this period the Gogo produced some eye-catching posters and flyers advertising music events at the club. 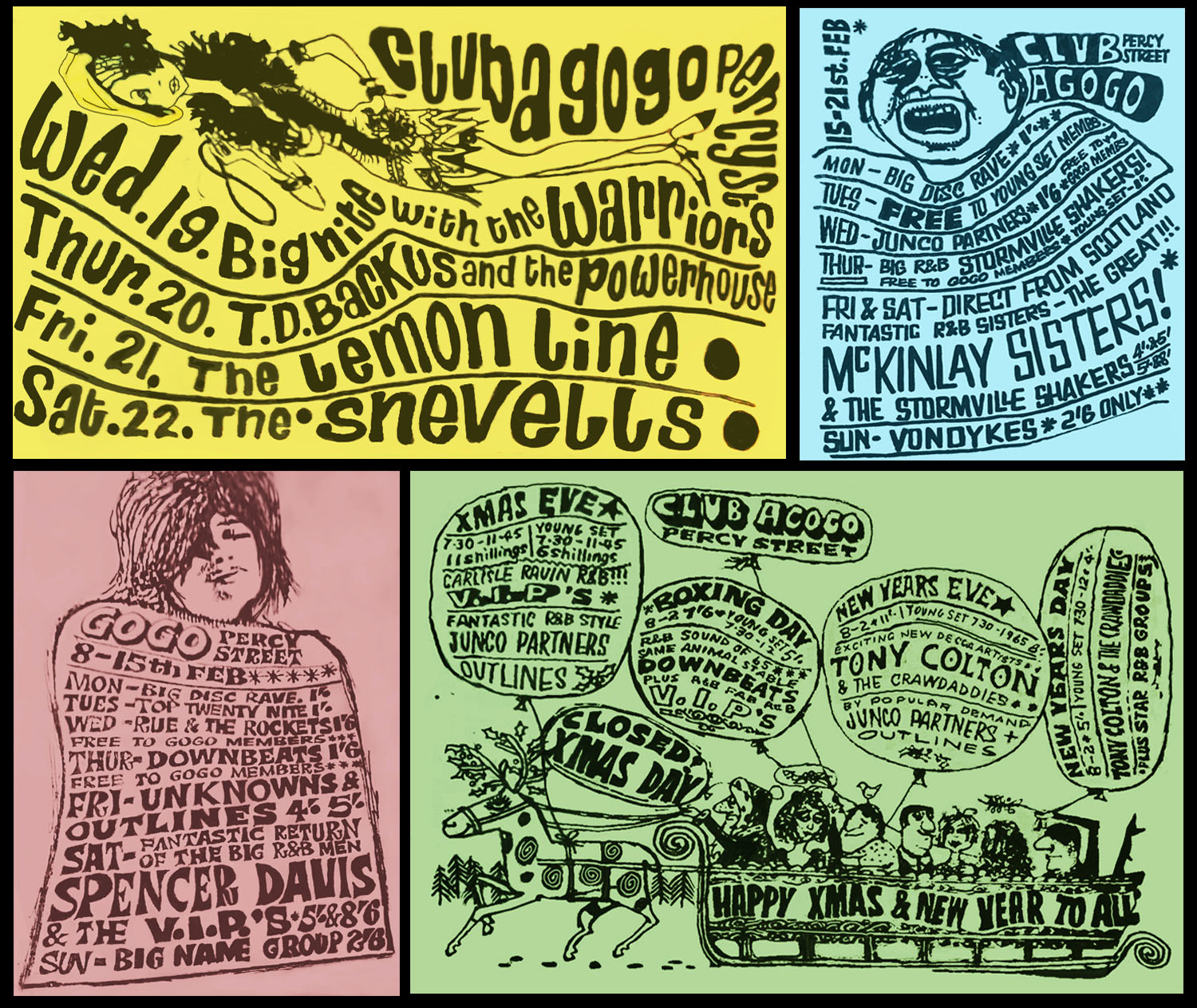 By all accounts the flyers were designed “in-house” and printed at a small print room in the Handyside Buildings run by Phil Hormbrey. The print room was easily accessed via the club’s gaming room and a fire escape. Dave Ismay, who worked at the club at the time, remembers that Gogo employee Keith Gibbon was studying architecture at the time and helped out in the print room. The design of the flyers and posters was probably down to Phil Hormbrey, otherwise known as “Big Phil”. Phil had also been responsible for supervising the construction of collages and other artwork in the booths of the Young Set. 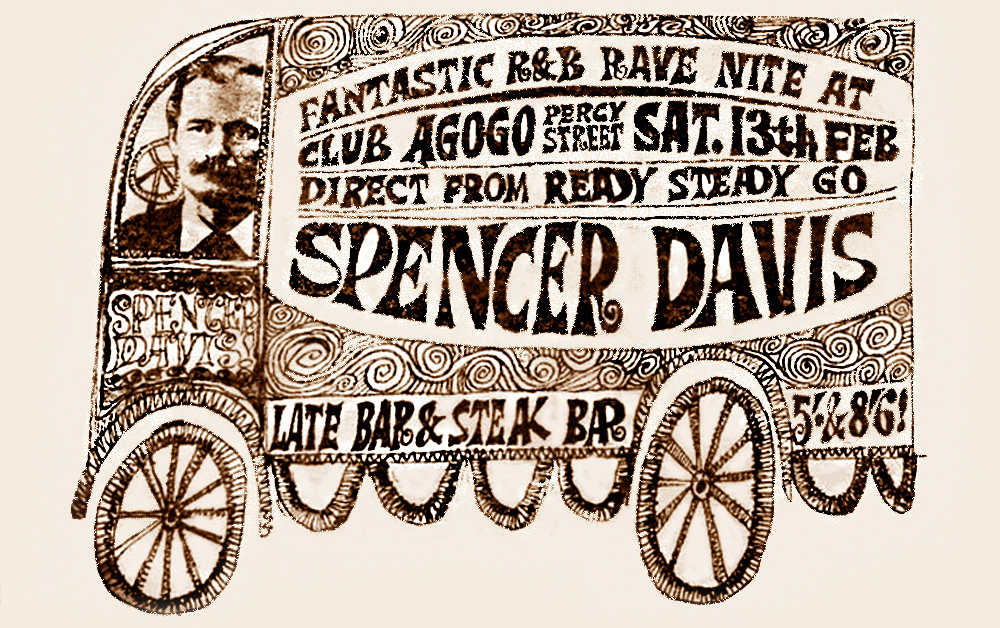 The Club a’Gogo closed down in 1968. One of the clubs that sprang up in its wake was “Change Is” on Bath Lane, Newcastle. The concept of Change Is was that the club would constantly change from one week to the next. The three floor levels could be permutated in fifteen different ways and the décor could be changed at will by projecting artistic images onto the club’s curved walls. 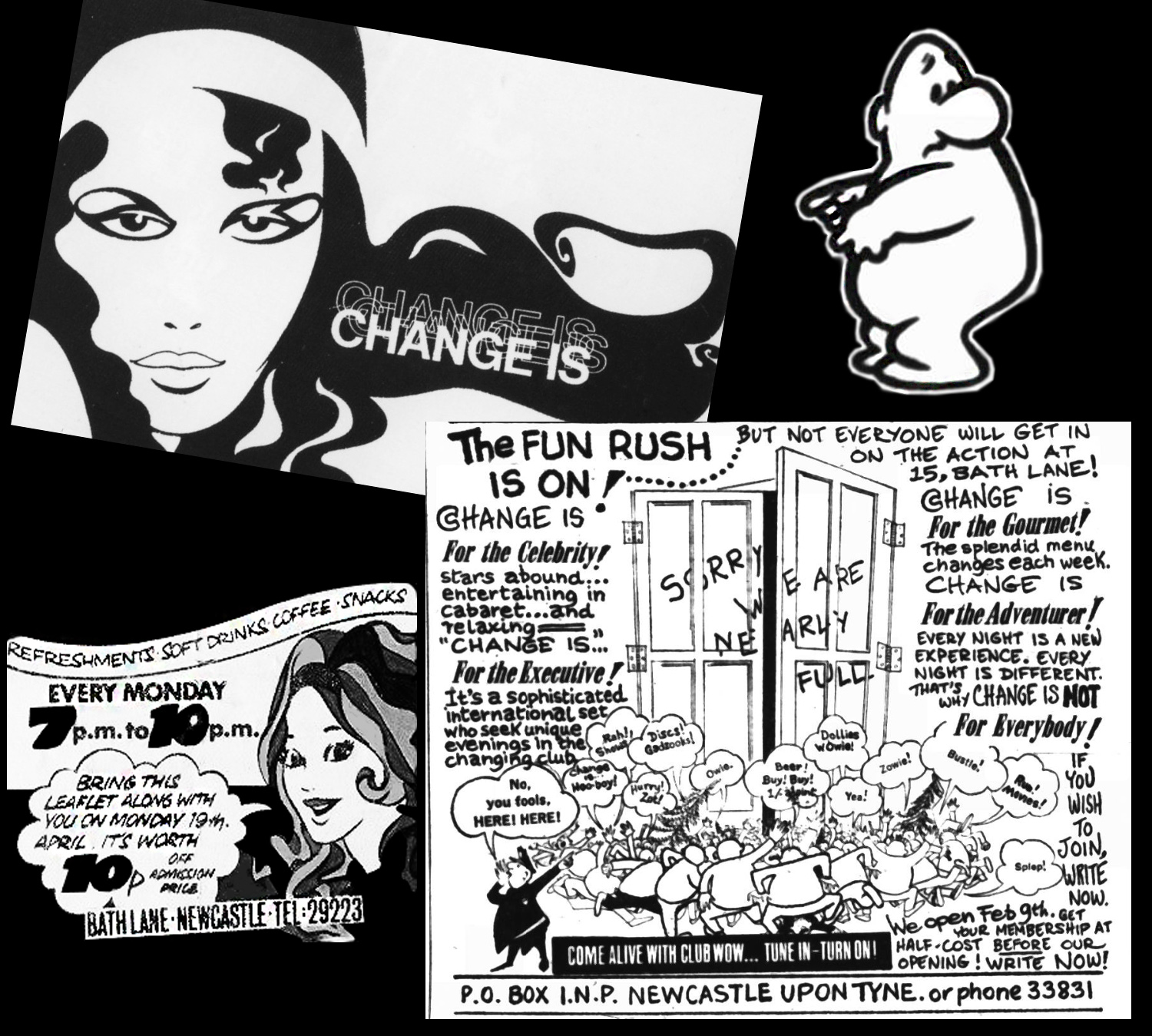 Sadly, the buidings that housed the clubs mentioned above no longer exist. All that is left of the club art from the late fifties and early sixties are archived newspaper adverts and the posters and flyers that people have hung onto. Perhaps sometime in the future these relics of Newcastle’s sixties night clubs can be put together in an exhibition to celebrate the “Art Of The City”.