The Battle Of Percy Street

Although the main theme of Ready Steady Gone is the northeast music scene from the mid sixties to the early seventies, I sometime come across a losely related subject that I can’t resist writing about. This one dates back to 1963 but does include some well known Tyneside characters and one, in particular that all ex-Club A’Gogo regulars will know.

I remember watching Martin Scorsese’s “Gangs Of New York” movie many years ago and being quite shocked by the violent street battle that took place near the beginning of the film. The battle was between two rival New York gangs and was based on a real-life incident that took place in July 1857 – “The Dead Rabbit Riots”. 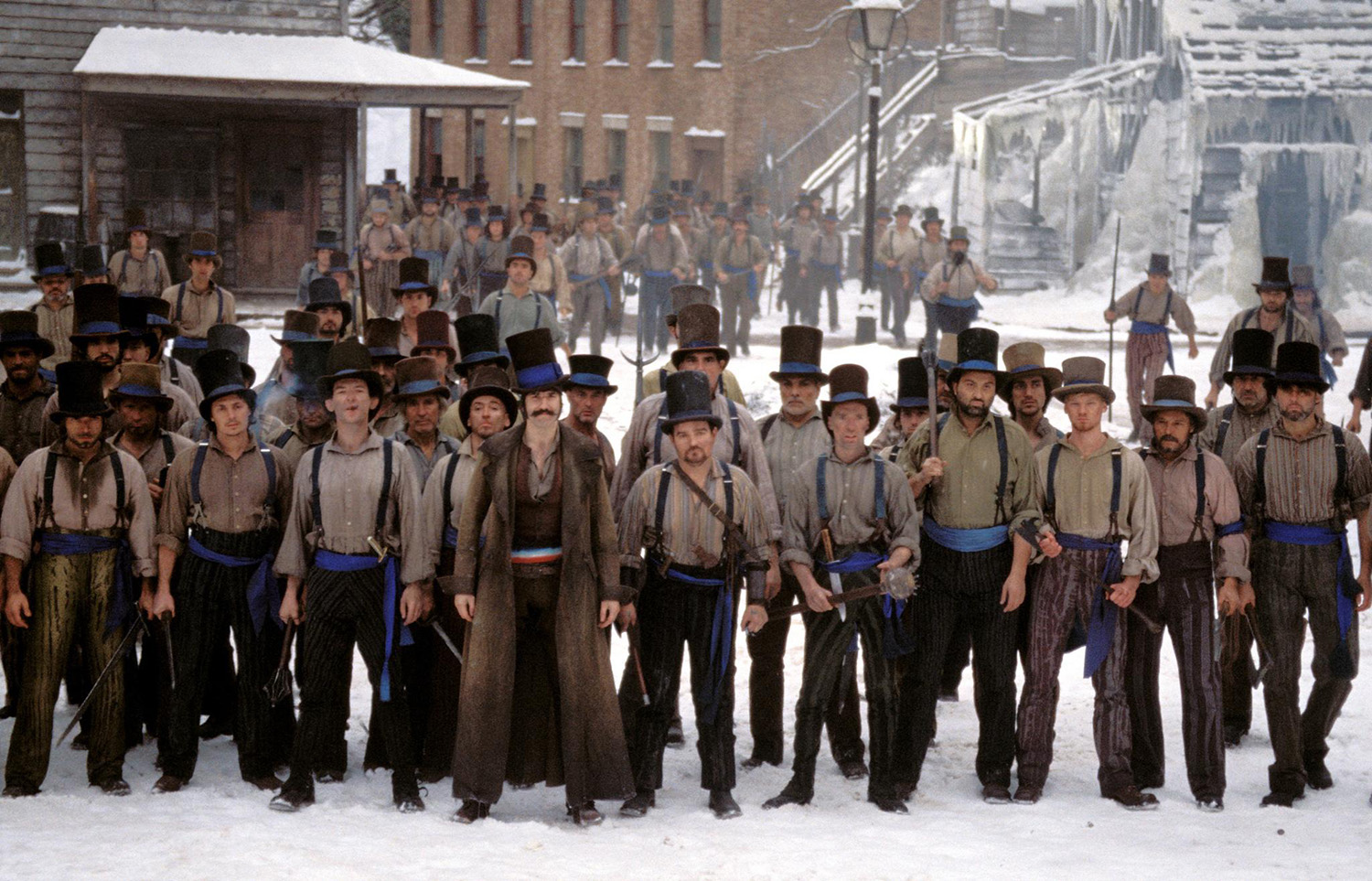 The gang members in the film were armed with lots of lethal weapons – swords, knives, axes, clubs, scythes, spears and maces. During the three-minute sequence, skulls were cracked, limbs chopped off, flesh hacked away and inevitably many men were killed and badly injured. If you want to be reminded of the violence in the “Gangs Of New York” street battle, here’s a two-minute clip from the movie.

After watching “Gangs Of New York” I couldn’t help but wonder if street fights involving such extreme violence, seemingly unchallenged by the law, actually happened on the streets of New York or any other city for that matter. Then a few weeks ago whilst doing some research for this web site, I found out that there was indeed such an incident in Newcastle upon Tyne just over half a century ago.

The bloody “Battle Of Percy Street” took place on the night of 26th April 1963. The Newcastle Evening Chronicle brought the matter to the attention of the Tyneside public the following day when this headline appeared. 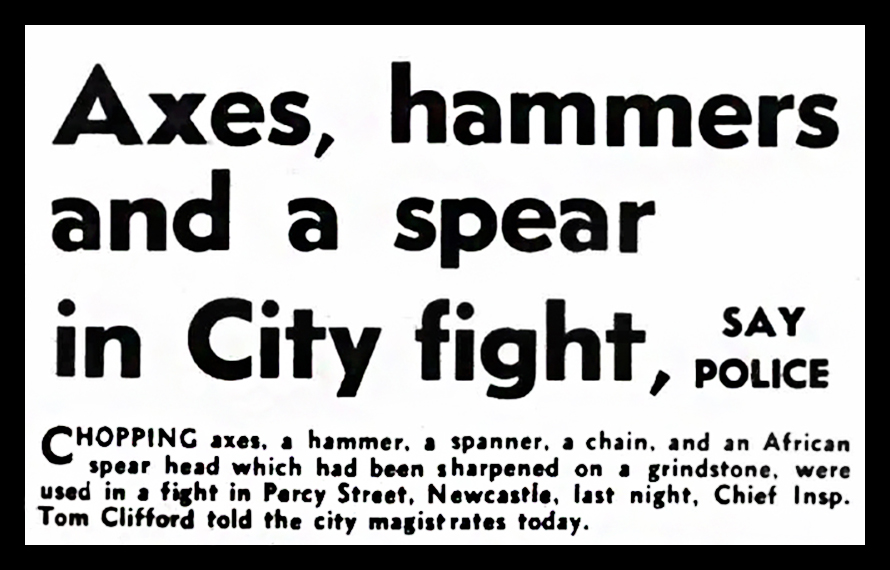 The newspaper article went on the describe the injuries inflicted on a group of five men who were victims of what was thought to be a planned attack by as many as thirty assailants.

One of the victims, and the one who suffered the most injuries, was none other than Dave Findlay, who later became the well known and much talked about bouncer at the Club A’Gogo. Throughout the ensuing Court proceeding Dave was always referred to as George Findlay or George David Findlay, which is the name on his birth certificate.

The “Battle Of Percy Street” originated in an incident that took place earlier in the year between Dave Findlay and a well-known Newcastle hard case named John Brian Sayers at the Club A’Gogo. Sayers was alleged to have told Findlay after the fracas at the Gogo that he would fight him in eight weeks time.

After the eight weeks had elapsed Dave Findlay and John Sayers were both at the La Dolce Vita nightclub. According to Dave Findlay, Sayers approached him and said, “The eight weeks are up. Come outside.” A fight took place outside the club with Sayers coming off worse. Sayers told Findlay “That’s the first fight. I’ll see you in the morning when I’m better”. “Please yourself.” replied Findlay.

Late in the evening of Friday 26th April 1963, after locking up the Downbeat for the night, David Findlay made his way up to the Club A’Gogo on Percy Street along with a cousin, an uncle, two friends and his Alsatian dog. As the five men approached the Club A’Gogo on Percy Street, Dave Findlay noticed a large group of around thirty men lurking around. He assumed that they had just exited en masse from the nearby pub after closing time. Then he saw John Brian Sayers and his brother Frank amongst the crowd. Suddenly Dave Findlay was hit from behind with a length of pipe. Findlay was then confronted by Frank Sayers who had his hand tucked in his coat. He shouted at Findlay, “I’m going to chop you up!” and pulled out a wood-chopping axe. Sayers hit Findlay once with the axe causing him to fall backwards. Dave Findlay’s Alsatian dog made a lunge at Sayers but it, too, was struck by the axe.

The rest of Sayers’ gang rushed forward including John Sayers and two brothers named Frank and George Shotton followed by the others who all appeared to be armed. The gang got stuck into the four people who were accompanying Dave Findlay laying into them with chains, a litter bin, lengths of piping and a steel bar. Dave Findlay managed to recover sufficiently from the axe blow and escaped the gang by running to a nearby taxi office. His attempts to secure the door were futile. Eight to ten men burst in after him and were on him like a rugby scrum. Frank Shotton, the first assailant through the door, began hitting Dave Findlay in the face with an iron bar. John Brian Sayers joined in hitting Findlay on the head with an axe. Two of the other assailants were hitting him simultaneously with pipes while George Shotton was punching him the face. In the melee, Dave Findlay did manage to strike out at Frank Sayers and break his jaw.

Suddenly someone shouted “Police!” and the gang instantly dispersed the bloody scene, discarding their weapons as they ran.

The manager of the taxi office, who had been present during the attack, later described Dave Findlay’s injuries and said, “I’ve seen some messes, amongst others on a battlefield, but nothing like this.”

After a short while Dave Findlay staggered along to the Club A’Gogo and was let in by one of the club’s floor managers, Bill Keith. His bleeding Alsatian dog had also found its way there.

The aftermath of the bloody “Battle Of Percy Street” was that Dave Findlay was hospitalised for three days and required a blood transfusion and 37 stiches. He had severe gashes on his head and lacerations to his face. The four men that were with Findlay suffered broken ribs and severe head injuries. Among the weapons left at the scene and recovered by police were spanners, chains, hammers, axes and an African spear head that had been sharpened on a grindstone.

Ten of the men who were identified as being part of the gang of attackers appeared at Newcastle Assizes in July 1963. They pleaded not guilty to various charges. Seven men including John and Frank Sayers and the Shotton brothers were convicted and received custodial sentences ranging from three months to eighteen months in prison. An eighth man was given three months in a detention centre.

What happened to the two people who were at the root of the “Battle Of Percy Street”, David Findlay and John Brian Sayers?

Dave Findlay made a full recovery. After his appearances in Court during the trial in July 1963, he was back in Court in October that year. This time not as a victim or witness but as a defendant. He was prosecuted for assaulting a dance hall manager. Allegedly Findlay had tried to gain access to the Neptune Dance Hall in Seahouses without paying and started a fight with the manager. He was fined and bound over for causing a breach of the peace.

By the time of John Brian Sayer’s release from prison in 1964, Dave Findlay was working for Mike Jeffery and Ray Grehan as a bouncer at the Club A’Gogo along with his brother Tommy. He continued to work for Ray Grehan for many years both as a doorman-cum-bouncer and as a decorator at Grehan’s various clubs and properties. 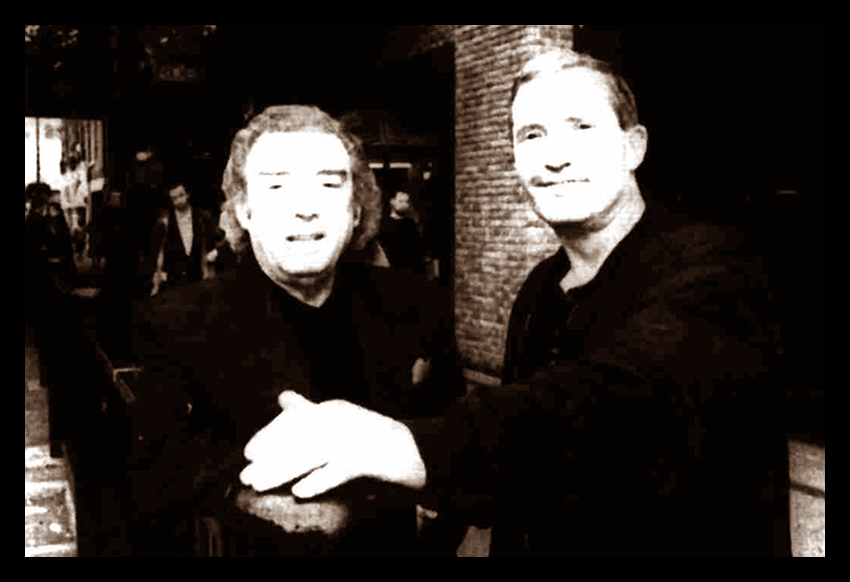 Ray Grehan (left) and Dave Findlay in the early nineties. (Photo from the Newcastle Evening Chronicle)

Some years ago, a musician friend of mine who worked at one of Ray Grehan’s clubs in 1969 and who knew Dave Findlay very well, told me something about the Percy Street incident. Dave Findlay had mentioned to my friend that, after things had died down, he hunted down all the men he knew were involved in the attack – those who hadn’t been sent to prison. One by one he “sorted them out”. My friend said that Findlay’s motive was not because of the attack on himself but for what had happened to his Alsatian dog.

I’ll end my bit about Dave Findlay with a story told to me by another friend, a fellow saxophonist who we’ll call “Bernie”: –

Bernie was playing one night at Ray Grehan’s Crescendo club in Whitley Bay. Dave Findlay was the club’s bouncer. The story goes: –

“The band didn’t start playing until 11-30 to 12ish. We had started the first set when a disturbance broke out just to the right of the table where my wife and the rest of the WAGS were sitting. Dave Findlay had this black guy called Archie up against the wall. The guy was inches taller than Dave. A friend of Archie’s came over to help – well that was his intention. Dave didn’t bother looking round he just seemed to whack Archie’s friend with his elbow and down he went. He head-butted Archie three or four times. Archie slid to the floor then all mayhem broke out. Dave ripped an electrical heater off the wall and smashed it over Archie who was lying on the floor. After it was all over Dave came over to the band and said, “Sorry about that lads.” “No problem, Dave”, we meekly replied. My wife never went back to the Crescendo!”

As for John Brian Sayers; after his release from prison in 1964 he went on to become the head of the notorious Newcastle Sayers crime firm. If you haven’t heard of them, try Googling ‘John Brian Sayers’, ‘John Henry Sayers’ or ‘Stephen Sayers’. 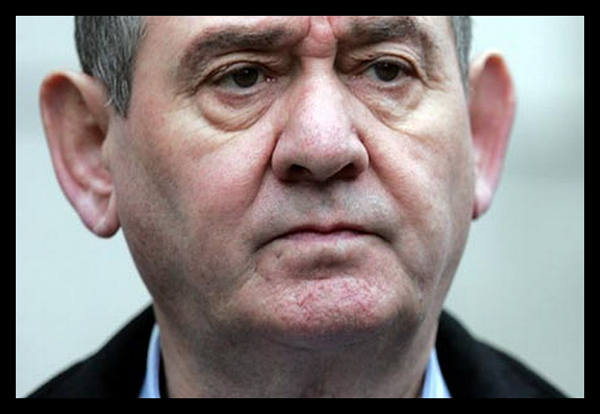 Over the decades the Sayers family have been linked to every aspect of organized crime on Tyneside including robbery, tax evasion, embezzlement, money laundering, drug dealing, murder and attempted murder. John Brian Sayers was shot in the face in 1990, allegedly by a rival gang member, but survived the ordeal.

An “untouchables” type police unit was even set up to try and bring down the family. Read about it here.

The “Battle Of Percy Street” is now just a distant memory and a lesser known part of the city’s folk-lore. But it’s a stark reminder of what can happen when a seemingly innocuous incident esculates into a full-scale feud.