The hot summer of ’67 was the Summer of Love. People were wearing flowers and beads – not just in Haight-Ashbury, San Fransisco but also in the north east.

Even in isolated Northumberland mining villages like Red Row, the hippy culture was taking hold. Red Row Working Mens Club, where they ran weekly punch ups masquerading as dances, were now advertising their events with a big banner; ‘Psychedelic Freak-outs Every Saturday Night’ – perhaps it should have read ‘Psychotic Freaks Out Every Saturday Night’. The local Red Row hard cases who regularly tried to kick the shit out of visiting bands now wore ‘Peace and Love’ transfers on their T shirts (but still kicked the shit out of the bands). Clubs and ballrooms were advertising their dances as ‘love-ins’. I saw the progressive rock band, Family twice that Summer. The band wore kaftans and had plastic flowers attached to their mike stands. The world’s youth was in harmony (except in Red Row) and everyone wanted to be one of the beautiful people, playing beautiful music. For a short period in the Autumn of 1967, James South played beautiful and diverse music (or so we thought at the time)!

The band was the creation of Brian Hughes, bassist and Jimmy Hall, Hammond organist, both from the Jazzboard. The name was thought up by Peter Bell, the vocalist, who intended to change his name to James South. James South had the potential to go places but in the event only lasted for three months. During that time the name changed from “The James South Syndicate” to “James South Set” and finally to just “James South”.

Apart from Jimmy and Brian, the line-up was going to be a horn section of myself and the other Jimmy Hall. The rest of the band was to be made up from a Chester-le-Street band; Peter Bell on vocals, a drummer, guitarist plus an additional tenor sax player. 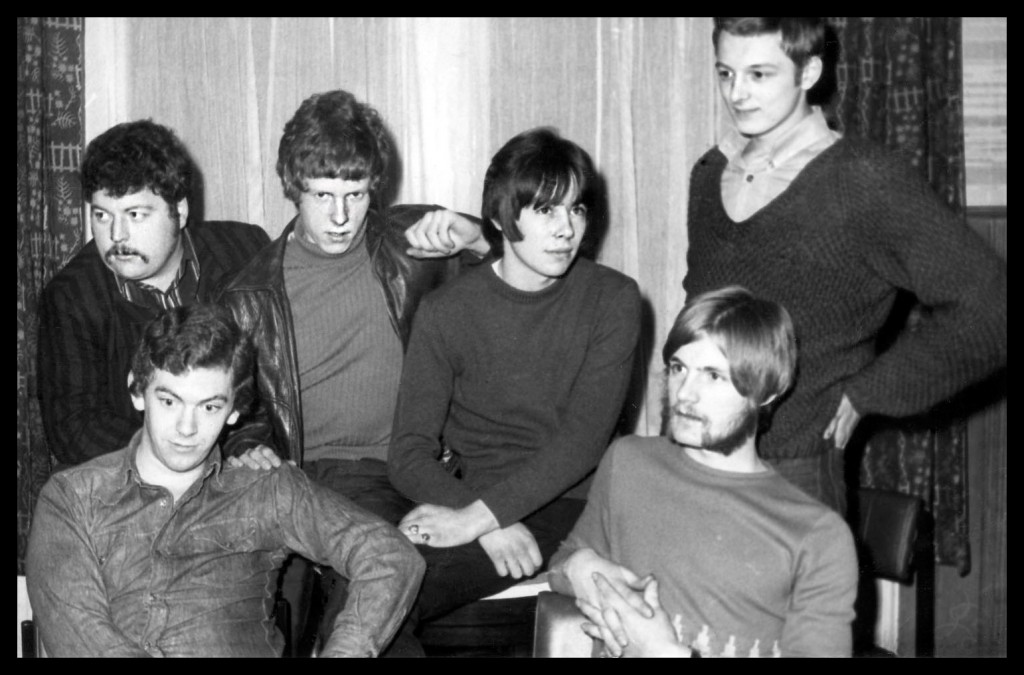 We practiced throughout August and September in an upstairs room at the ‘William IV’ pub in Birtley during which time, the guitarist, drummer and sax player left the band before we’d even played a gig. We were booked to play at the New Cellar Club, South Shields on 4 October 1967 so we had to find replacements in a hurry. The drummer was replaced by Nigel Olsson, the Jazzboard’s original drummer and the new line up was completed by an experienced guitarist called Keith “Pongo” Waring.

James South was basically a soul band but we were also attempting other material that no other local bands were doing at the time. With the exception of Nigel, all the instrumentalists could read music. Brian was able to work out fairly complex arrangements, score the music and turn up at rehearsals with written parts for the band. One of our best numbers, and the one with the most intricate arrangement, was a cover of the Young Rascals “A Girl Like You”. Our opener was “Soul Finger” by the Bar Kays followed by a mix of Soul and Motown standards – “I Was Born to Love Her” by Stevie Wonder, “Beauty’s Only Skin Deep” by the Miracles, “I Can’t Help Losing You” by the Temptations. We also did jazz arrangements of Jerome Kern’s “Ol’ Man River” and Willie Nelson’s “Funny How Time Slips Away”. 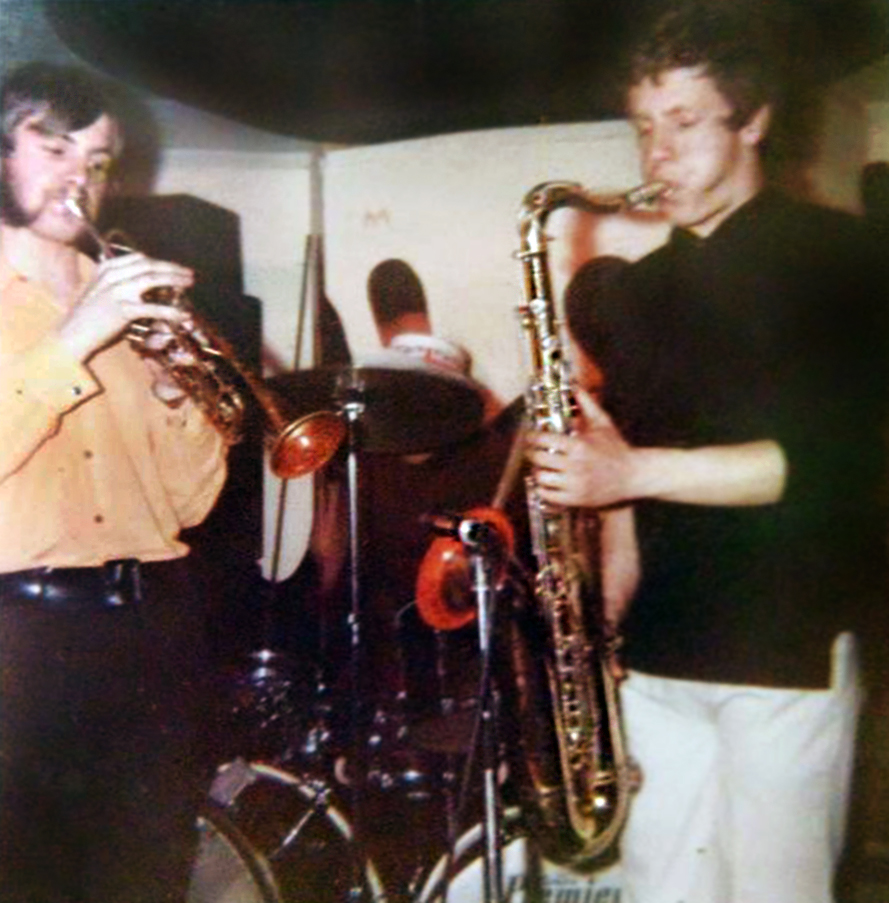 Jimmy Hall (left) and Roger Smith at the New Cellar, South Shields. Nigel Olsson can just be seen in the background wearing a hat.

James South never achieved the same level of success as the Jazzboard but nevertheless the band played some good quality gigs at places like the Coatham Hotel (Redcar Jazz Club), the Argus Butterfly (Peterlee Jazz Club), the Bay Hotel, Sunderland and the Quay Club in Newcastle. Unfortunately, cracks started to appear after only a couple of months. Brian Hughes left the band suddenly in December to be replaced temporarily by Pongo who switched from guitar to bass.

Nigel Olsson announced at a gig at Houghton-le-Spring Rugby Club on Boxing Day that he was leaving James South to join a band called Plastic Penny and would be appearing on Top Of The Pops that week. Everything I Am by Plastic Penny was racing up the charts in December 1967. In fact, the record had been made by a solo singer called Brian Keith using some musicians from the band he was with at the time – a showband called ‘Chris Lamb and the Originals’. A credible band had to be put together quickly for a Christmas Top of the Pops performance. Nigel and his old band mate, Mick Grabham, were in the right place at the right time and filled the vacancies.

In an interview about ‘Plastic Penny’, Mick Grabahm described how he and Nigel Olsson were recruited: “I was living in Sunderland at the time and the rest of the Plastic Penny was formed out of a group that was a showband called Chris Lamb and the Universals. Three or four of them had made a record apart from the rest of the group, which was produced by Larry Page of Troggs tape fame, and they were playing as Chris Lamb and the Universals in this night club in Sunderland. They were looking for a guitarist and they saw this friend of mine with frizzy hair [Geoff Docherty] and asked him if he was a guitarist – they didn’t want to get a face from London into the band. He said ‘No I’m not, but I know somebody who is’. At the time, this guy was sharing his house with me, so he brought them back and they asked me if I wanted to go down to London and give it a try. They said that they needed a drummer and Nigel Olsson was a real good friend of mine, so I got him to come down as well and we both ended up getting the job.”

They both went on to be permanent members of Plastic Penny and continued playing in the band after Brian Keith had left. Nigel later found true fame as the drummer with Elton John in the early seventies and later as a session drummer. More recently he rejoined Elton John and for a number of years has been a part of Elton’s touring band. 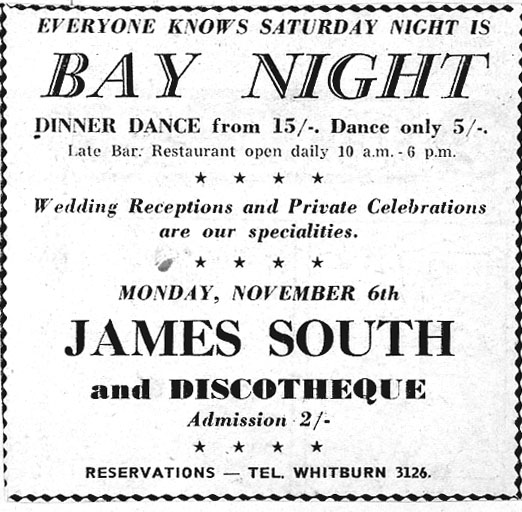 Advertisements for the Bay Hotel, Sunderland