If you are a performer with an ambition to become famous, for the past 10 years or so you will have had the opportunity to take a fast track to instant stardom. I’m talking, of course, about TV programmes such as The Voice and X Factor. If you have something resembling talent and can make it past the initial stages that eliminate the cringe-fodder, the weirdos and the no-hopers, you could be in with a chance of realising your ambition.

Even if you don’t get to the finals, you will have undergone professional coaching, met influential showbiz people and have been seen by millions of viewers worldwide. However much people hate the concept of X Factor or the programme itself, there is no doubt that for some lucky participants the TV show has helped them bypass years of hard work.

In the mid sixties, when 17 year old Kim Davis from the north east began her career as a professional singer, ‘fast track’ wasn’t in a performer’s vocabulary. Although Kim definitely had what’s now known as the X factor, It took her nearly 17 years of hard work to achieve a hit single and, tragically, those 17 years turned out to be less than one half of her short life. 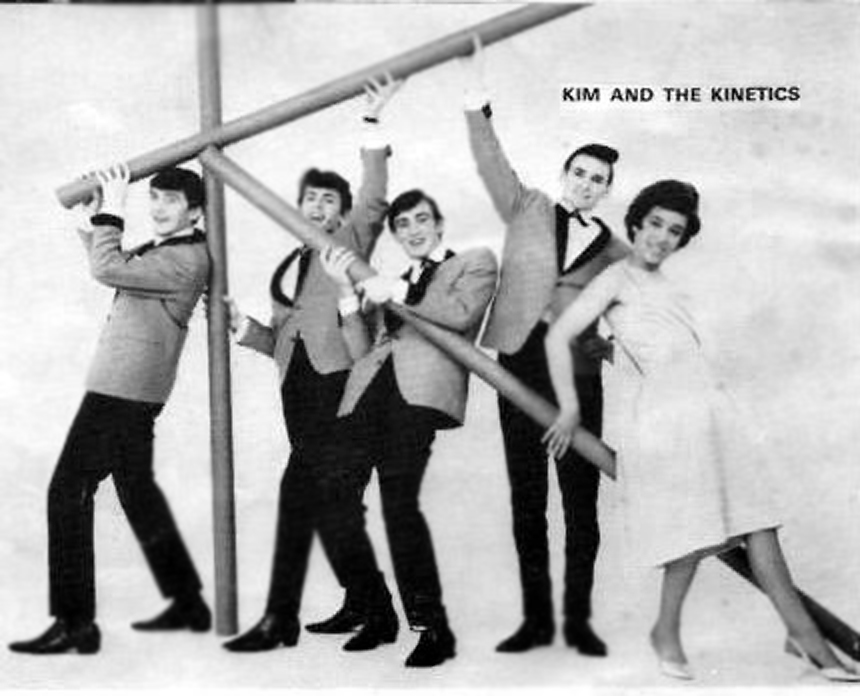 Kim Davis emerged as a force to be reckoned with in1964 when she started singing in north east clubs with a four piece backing band, collectively known as Kim and Kinetics. One of the clubs at which the band appeared regularly was the Beach Club in South Shields. With her great voice and dynamic stage presence it wasn’t long before she was recognised as being a potential star. Whilst performing on the club circuit, possibly at the Beach Club, Kim came to the attention of Newcastle club owner and entrepreneur Ray Grehan. Ray had been involved in Newcastle’s Club A’Gogo in its early days and by 1964 he owned a couple of north east clubs – The Scene in Middlesbrough and the Blue Note in Sunderland. Ray Grehan became the manager of Kim and the Kinetics and started promoting them in the north east and beyond.

In September 1964 Kim and the Kinetics became part of the Geordie Sound tour with five other north east bands. The Geordie Sound was designed to showcase north east talent following the Animals success. The show was scheduled to kick off in the north east followed by a number of bookings nationwide. In addition to the north east bands, a number of popular national acts including the Merseybeats and a young Joe Cocker were booked in an attempt to boost audience numbers. The Geordie Sound tour was not particularly successful and did little to raise Kim’s profile either locally or nationally. Following the tour Kim and the Kinetics continued to play at venues in the north east, still under the management of Ray Grehan.

At the beginning of 1965 Ray Grehan bought into a struggling entertainment agency in the Doncaster area called the Chris Wainwright Agency. Around this time I started playing sax for the Kylastrons who, at the time, were getting work through Ray Grehan at his two north east clubs; the Blue Note and the Scene. Ray started providing additional bookings for the Kylastrons and Kim and the Kinetics in the Yorkshire area through the newly acquired Wainwright agency. On several occasions in the early months of 1965 the Kylastrons stayed in the same digs as the Kinetics when both bands were playing in the Yorkshire area. It was rumoured at the time that Ray wasn’t happy with the existing Kinetics lineup. At the end of February Ray approached me during a Kylastron gig at the Blue Note and asked me if I would join Kim’s band as a sax player. As things were going OK with the Kylastrons I declined the offer. Not long after Kim parted company with Kinetics and needed a whole new band.

In the months that followed Kim teamed up with a top north east band – The Del 5. At the time the Del 5 were playing regularly at the Ray Grehan’s Blue Note club. According to drummer Mike Tulloch, the band was approached by Wally Nash who managed the Blue Note for Ray and asked if they would be interested in backing Kim Davis on a professional basis. The band agreed and started performing with her under the new name of ‘Kim D and the Del 5’ in what was to become a very successful partnership. 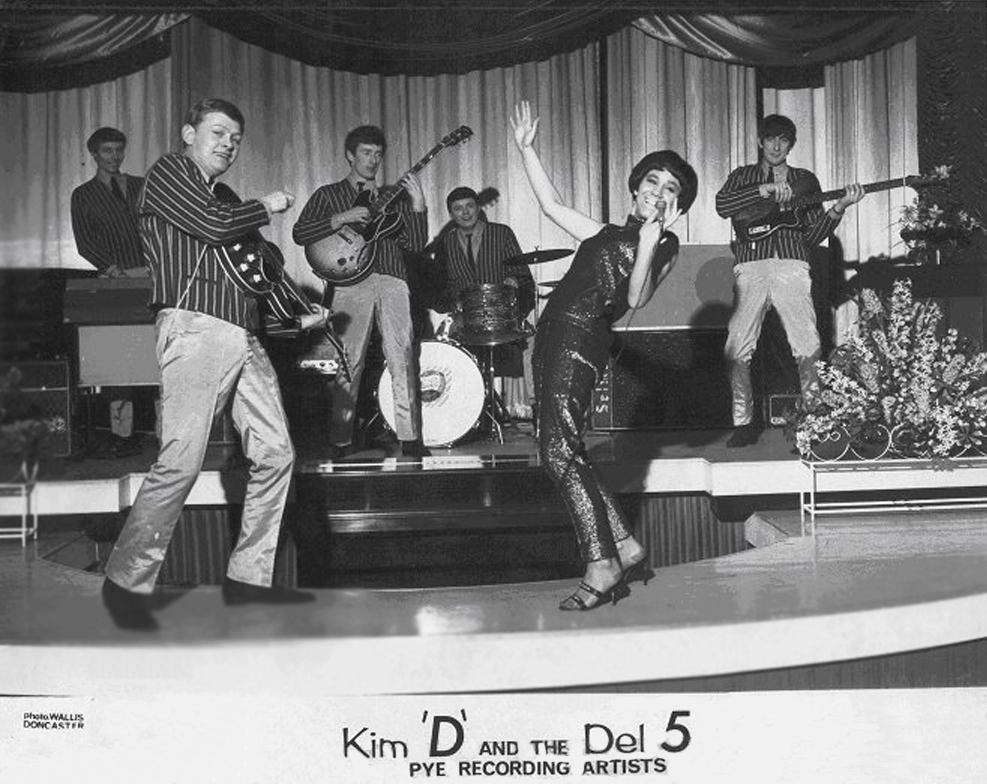 Kim D and the Del 5 toured throughout Yorkshire and Nottinghamshire playing at contrasting venues such as the Scala in Doncaster and Ollerton Miner’s Welfare Club near Mansfield. They were also doing gigs as far away as the Rhondda Valley in South Wales where they received great receptions, in particular when Kim sang a couple of Shirley Bassey songs.

Around the back end of 1965 or early 1966, Ray Grehan arranged an important audition for Kim and the band at the Starlight Rooms in London. The audition was in front of Colin Berlin, who was Tom Jones’ booking agent and the London impresario, Arthur Howes. Unfortunately, the audition failed to achieve a deal for Kim and the band as Berlin and Howes were not happy with Ray Grehan’s terms.

Although neither of the agents signed Kim and the Del 5, the band did subsequently get some prestigious gigs through Colin Berlin, including the Winter Gardens in Bournemouth and Sheffield City Hall. They also toured with Roy Orbison on his 1966 Spring UK tour which also included the Walker Brothers and Lulu. The 33 venue tour opened on 25th March 1966 at Finsbury Park Astoria and closed at the Coventry Theatre on 1st May 1966. The Del 5s drummer, Mike Tulloch remembers travelling on the tour bus with Roy Orbison whilst the Walker brothers travelled separately in a Mark 10 Jaguar. On the second day of the tour Roy fell off a motorbike and had to do at least one gig with his leg in a cast.

After the tour, Kim D and the Del 5 went back to playing the club circuit in various parts of England and Wales. By this time they had released a single on Decca records called ‘Don’t Take Your Lovin’ Away’. The song was written by a Welsh songwriter called Rod Thomas who the band met on one of their tours in Wales – more about the song on this link. In spite of the record being featured as the ‘Hallmarked Hit of the Week’ on DJ Tony Hall’s show for Radio Luxemburg, it failed to take off in the charts. Kim also had some TV exposure without the band on the Tom Jones Show plus some other work for Tyne Tees Television but this, too, failed to launch her as a national star.

Eventually Kim D and the Del 5 parted company leaving Kim without a backing band. At the beginning of April 1968 during one of my gigs with a band called Village at The Carousel Club in Chester-le-Street, I was approached by Ray Grehan for a second time and asked if I was interested in joining a band he was managing. Once again I declined the offer of the work, which I presumed was to be part of Kim’s new backing band. As it happens, the guitarist from my previous band, Keith Pongo Waring started playing with Kim so I would have been in good company. The new band, which was to include a two piece sax section was called the Del 7.

Sax player, Mick Appleby, who played alongside Pongo in the Del 7 fondly remembers his days of performing with Kim: –

‘I was privileged to work with Kim D and the Del 5 for a couple of years up until about 1968. I played tenor sax, and stepped in when Peter (the Colonel) Parkinson left the band. We toured the northern club and South Wales circuits almost continuously. Kim was a knock-out live performer, and none of the recorded stuff I’ve heard does her justice. That touring life was great fun (what I can remember of it) but also very hard work – especially lugging Bernie Watson’s Hammond organ in and out of clubs twice a night (we were almost always booked for a double, and often with a Sunday lunchtime show thrown in for good measure).

Kim took it all in her stride, and never gave a bad performance even though travelling in beaten-up group vans with a bunch of uncouth louts, and living from week to week in theatrical digs.

The Del 5 or Del 7 formed and reformed a couple of times; we ended our days with a really nice gig as resident band at the Sands club in Whitley Bay (until it got burnt down) – and then went back on the road for a few weeks until the band finally imploded somewhere about Spennymoor, or possibly Chester-le-Steet.

The highlights that I remember: Opening with Kim at the ABC theate Blackpool for Paul Jones (Manfred Mann), Spending the week with P.J.Proby at the Top Hat in Spennymoor, meeting (the then unknown) Joe Cocker in the Penny farthing club in Sheffield, Kim blowing Tom Jones off the stage in his own club in Treforest (admittedly he was well boozed up that night), and of course there was the Animals reunion at the City Hall in Newcastle, which is shown in the photo. – (below)

At all these diverse venues, Kim could hold the stage with the best of them and had a fantastic repertoire as well as great stage presence and a fantastic voice.’ 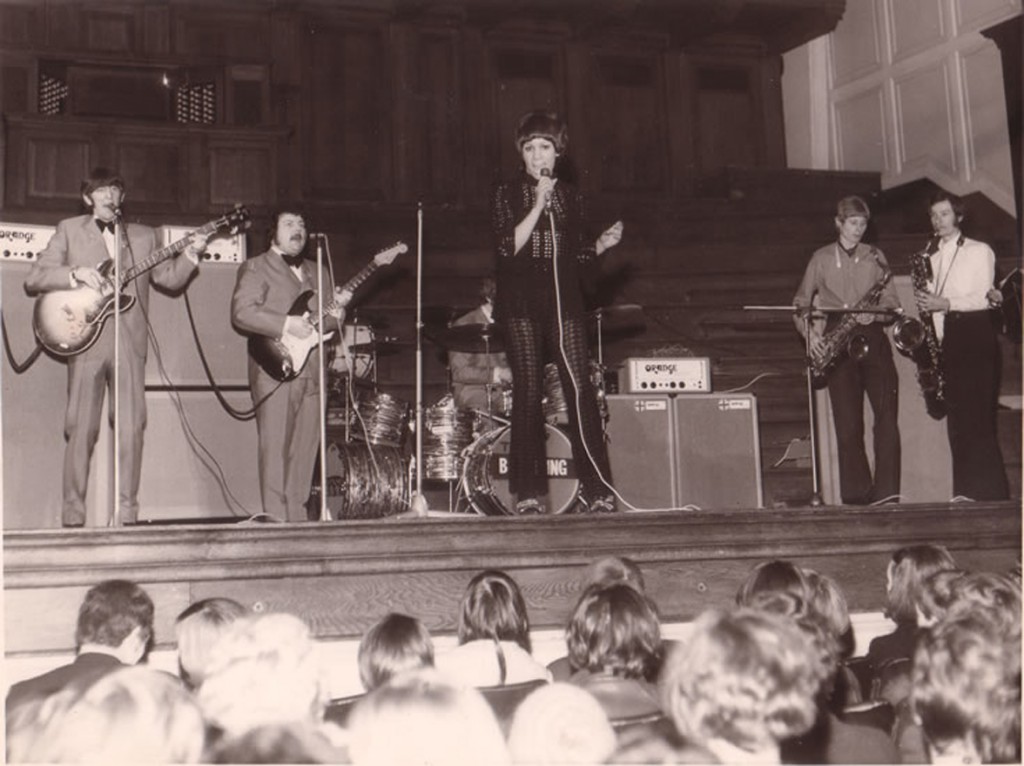 During the period that Kim Davis was managed by Ray Grehan, she released four singles on various labels: –

Click on the tracks below to listen to Kim:-

Don’t Take Your Lovin’ Away

Although none of the singles were chart hits, a couple of them became popular with Northern Soul fans and can still be found on various Northern Soul compilation CDs. In the seventies Kim Davis worked around the north east club scene without a backing band. By this time her career as a solo recording artist had come to an end.

Then her fortunes changed. In 1979 she joined a disco/soul band called Eruption, replacing their singer Precious Wilson. Eruption was a British band who had become very successful in Germany after being discovered by Boney M producer Frank Farian. By the time Kim joined the band they had already released a couple of albums and had achieved a number 5 UK chart hit – ‘I Can’t Stand The Rain’. 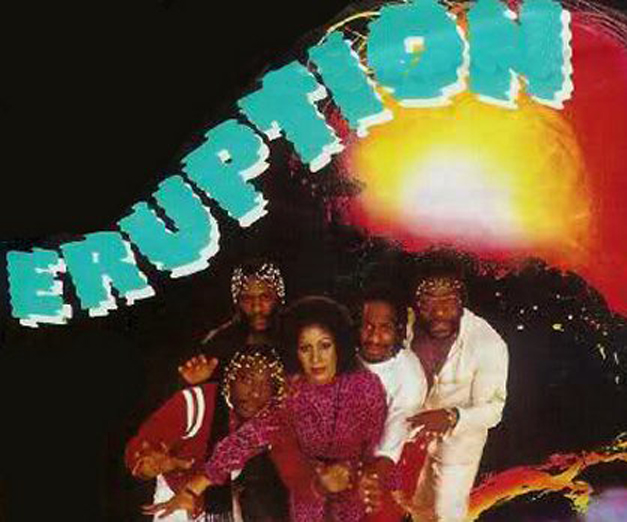 Kim appeared on Eruption’s third album ‘Fight, Fight, Fight’ and on the single ‘Go Johnny Go’ which was a big chart hit in Germany in 1980. Tragedy struck the same year when Kim suffered a fatal brain haemorrhage. Some reports state that Kim was killed in a car accident so it is possible that the haemorrhage was brought about by a head injury sustained in an accident.

There are several videos on Youtube featuring Eruption performing ‘Go Johnny Go’ but so far I haven’t found one with Kim as the vocalist. However the following Youtube performance of ‘One Way Ticket’ does feature footage (but not the voice) of Kim and claims to be a rare video of her: –

Here’s another video of Kim performing at the National Club Act Awards in 1976.

So there was no instant X Factor type stardom for Kim Davis. Her deserved success was a long time coming and Kim’s way involved a lot of hard work.