I recently bought the February 2018 edition of Uncut Magazine, which includes an article about ‘The Great Lost Venues of Britain’. Uncut has written about 50 of the UK’s greatest lost venues chosen by the magazine’s staff and readers. Included in those 50 venues are well known names such as London’s Flamingo and Marquee clubs, Liverpool’s Cavern and Manchester’s Hacienda. On reading through the article I was pleased to see that the northeast has not been forgotten.

Nearly half of the defunct places featured were in the London area but five were well known venues in the northeast; the Club A’Gogo, the Mayfair Ballroom, the Riverside, Redcar Jazz Club and the Rock Gardens in Middlesbrough. What is more pleasing for me is that I actually performed at four of those ‘great lost venues’ in the sixties and seventies (although the Rock Gardens did have a different name when I played there). 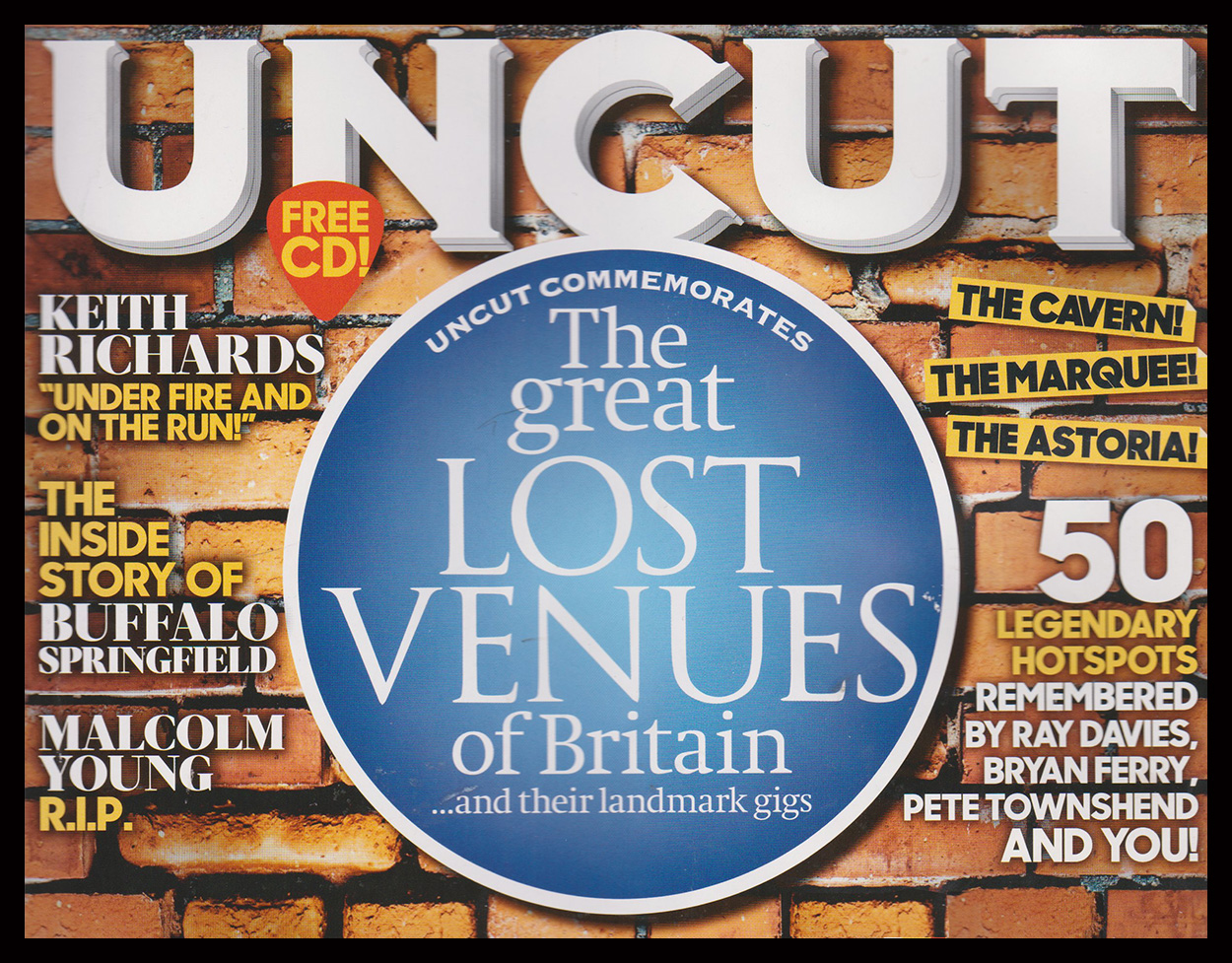 Of course, for a number of years Ready Steady Gone has featured pages about a couple of Uncut’s choice of great venues – The Gogo and The Mayfair. There are also pages on the site about a few more great lost northeast venues – The Cellar at South Shields and the el Cubana at Sunderland. Lots of other Newcastle venues are listed on the 60s Club page.

My memories of the above mentioned venues are as a gigging musician rather than as a clubgoer or dancer. Consequently my own perspective is probably somewhat different to lots of visitors to this site. That’s not to say it wasn’t an enjoyable experience to visit these venues even though it involved a couple of hours work each night. The venues listed above were undoubtedly among my favourites. However, there were lots of other lesser-known northeast venues around between 1965 and 1972 that a lot of people will remember and that hold warm memories for me. I’ve decided to list a few of these other northeast ‘lost’ venues and to write about them based on my own experiences. So in no particular order: –

From the outside, the ‘Tree Of York Road’ at Peterlee looks like your average housing estate pub. Built in the post-war era to serve the expanding new town of Peterlee and, in particular, the Acre Riggs Estate there are no external clues to show that the premises was once the acclaimed ‘Peterlee Folk and Jazz Club’, a top County Durham venue in the late sixties and early seventies. 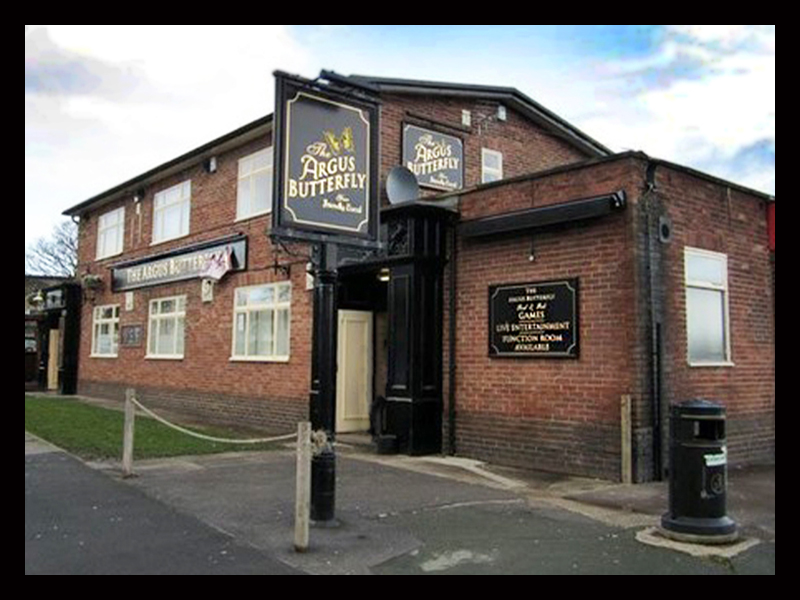 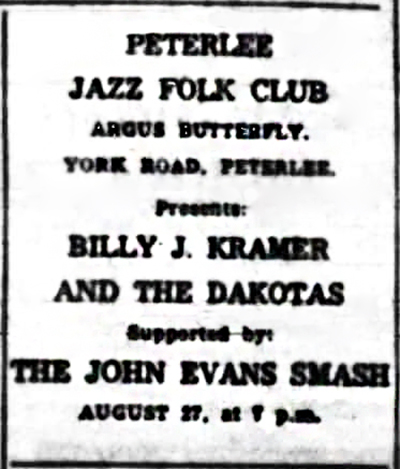 An early ad for the Argus Butterfly from 1967

Back then the ‘Tree Of York Road’ was named ‘The Argus Butterfly. The folk and jazz club was run from the pub by promoters Dave Richards and Brian Stoker. Top touring bands of the era regularly played at the venue as can be seen from the promotional material below. A popular local band usually supported the featured national band. The gigs took place mainly on a Sunday evening to a seated audience. Some of the well-known acts that appeared at the Argus Butterfly before they became huge were Led Zeppelin, Free, Jethro Tull and Deep Purple. 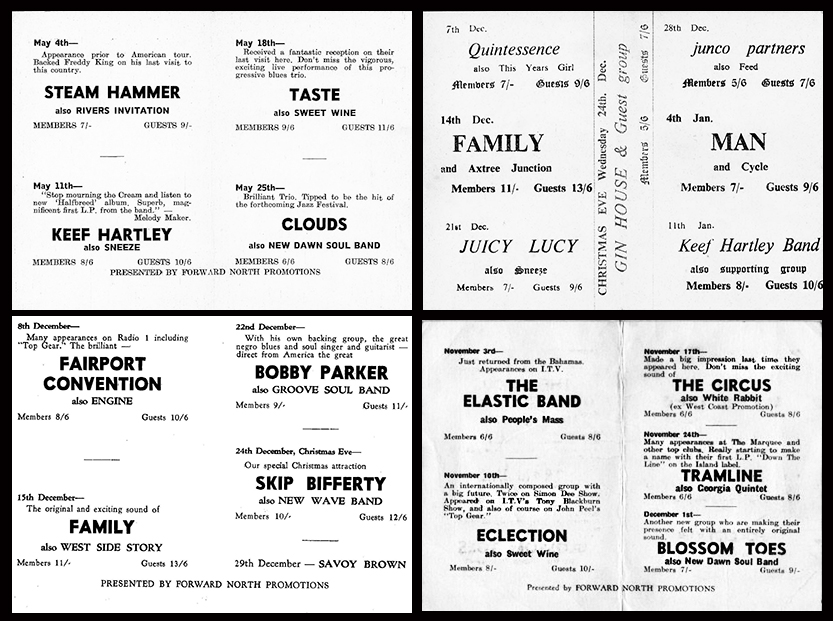 Between 1967 and 1970 I played at Argus Butterfly in three separate bands supporting, amongst others, Family, Juicy Lucy and Keef Hartley. I remember the music room as not being particularly large and having the look and feel similar to the interior of a Working Mens Club with a modest sized stage at one end.

The Sunday nights at the Argus Butterfly pulled in large crowds with people travelling down from Newcastle and Sunderland and up from Teesside. 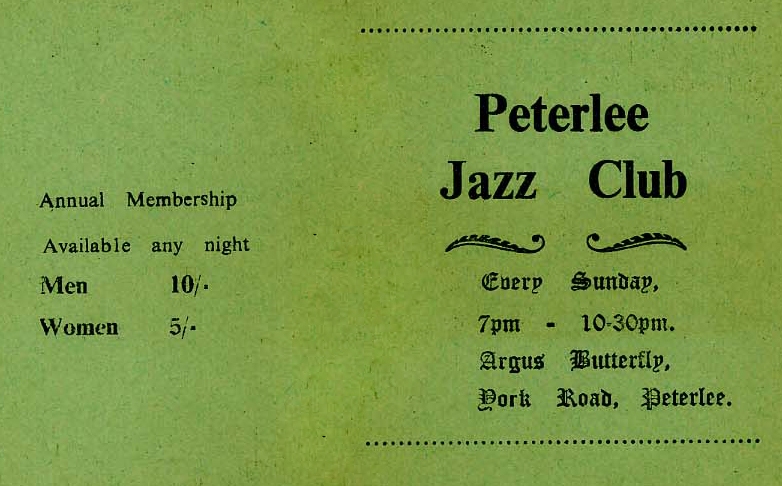 The Cellar at Ashington has been around in one form or another for over 50 years. It is currently a live music venue called ‘Bubbles’, which hosts local bands as well as a popular buskers night.

The origins of the Cellar lay with the Ashington Folk Club, which was formed in 1964 at the Portland Hotel, Ashington. When the folk club moved to premises in Station Road in 1967 it became known as the Lampglass Music & Arts Cellar Club or just simply the Lampglass Cellar. As well as folk artists other types of music such as soul and rhythm & blues became a regular feature at the club. 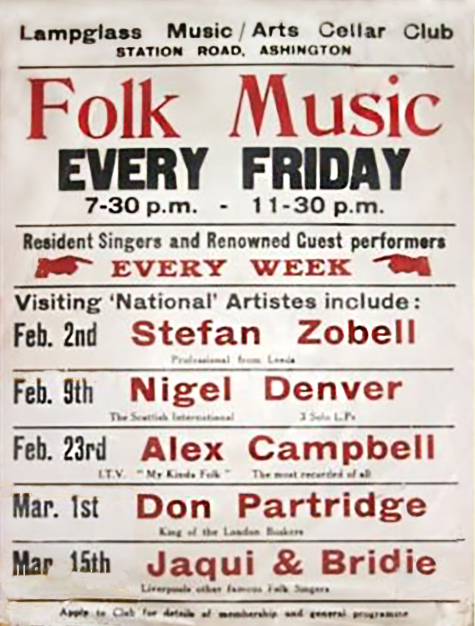 According to Bubbles web site the venue has a fantastic history. In its previous incarnation as the Cellar or Lampglass Cellar, many top artists in the 60’s and 70’s played there. The list includes: Fleetwood Mac, Sting, Brian Ferry, Billy Connolly, Arlo Guthrie, Alexis Korner, The Spinners, Alan Price Set, Geordie, The Groundhogs, Jimmy Page, Jeff Beck, John Mayall, The Small Faces and Lindisfarne. 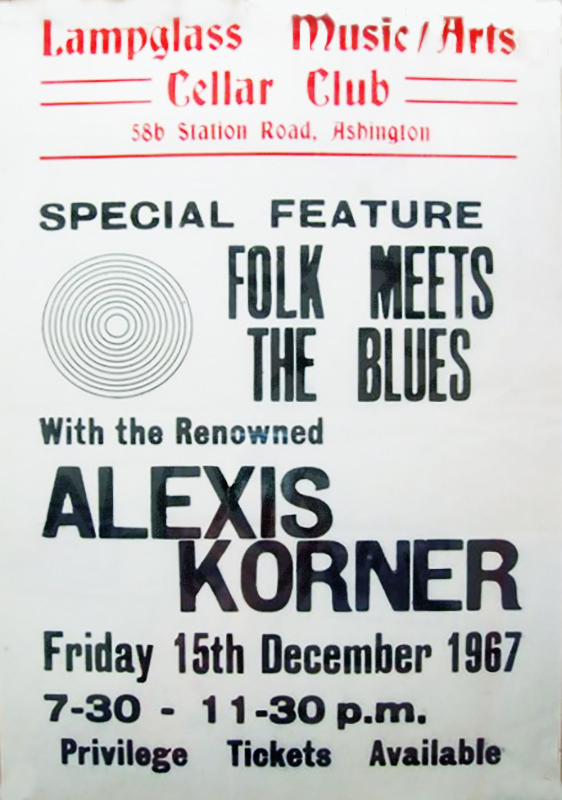 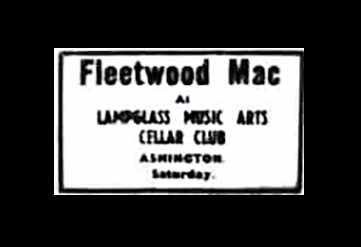 My own memories of Ashington Cellar go back to 1967 when I played there several times with Jazzboard and the James South Set. I later played there with Sneeze from 1969 and with Scallywag in 1971. I remember the club was always full and had a great atmosphere. There’s not a great deal of information elsewhere on the internet about the Cellar but I did manage to find a photo of the northeast band Bullfrog at the club (below) in the early seventies. 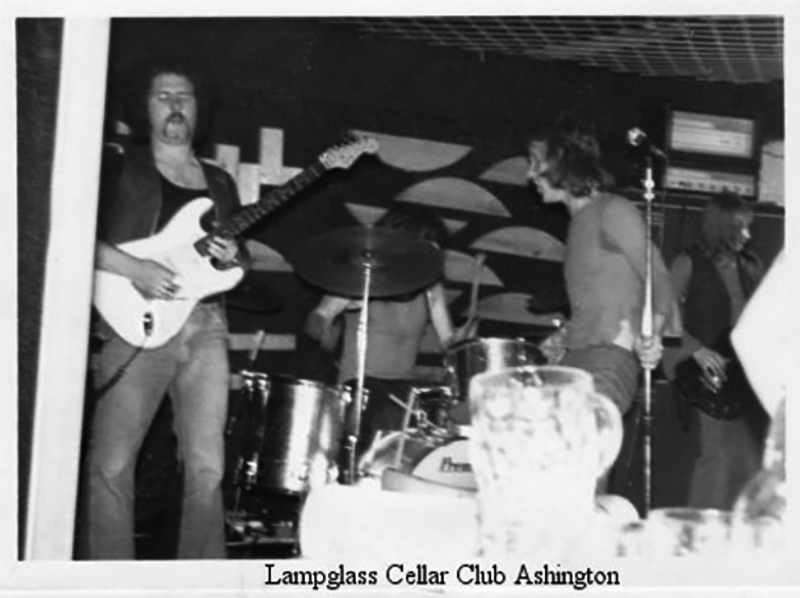 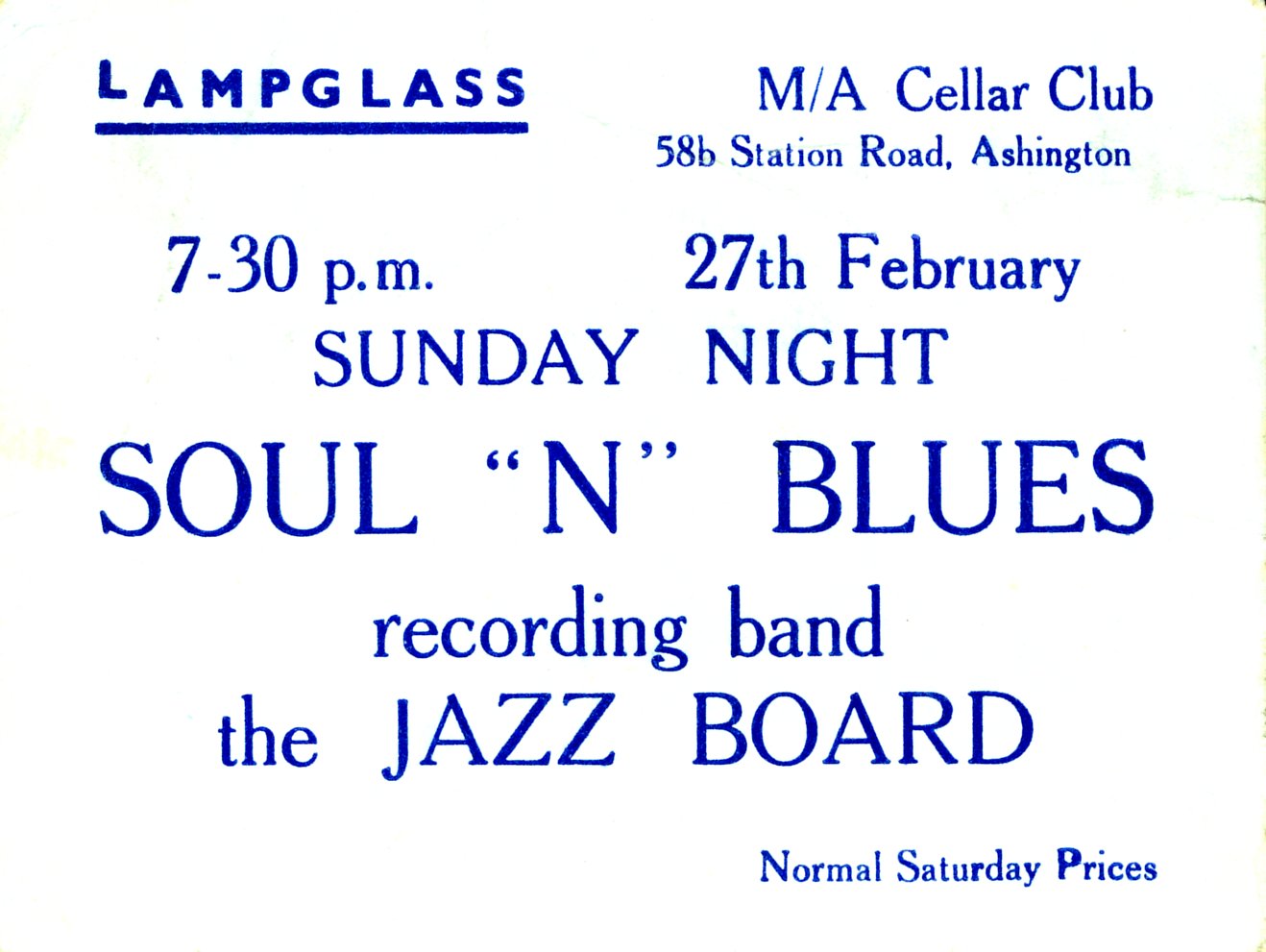 The name ‘West End Boys Club’ doesn’t really conjure up images of an exciting music venue but in the mid sixties most of the top north east bands played at the club’s weekend dances; bands such as the Junco Partners, Chosen Few, Sect and Elcort.

The club, situated on Sutherland Avenue Fenham, was originally started in the 1940s as a youth centre for boys. By the time a new clubhouse was built in the mid-sixties, girls had been allowed to join the club. The main activity became dancing with discos on four nights a week and a live band on a Saturday. The club was not licensed and attracted an age range of 14 to 20 year olds.

In 1965 my own band, Jazzboard had been gigging regularly but only in the Sunderland area. Our manager, Berty Lowes, was keen for the band to play on the Newcastle gig circuit. Jazzboard’s break into the Newcastle scene came as a result of auditions for a recording contract sponsored by Radio Luxembourg, which took place at West End Boys Club in 1965. Lots of local bands attended the audition but it was Newcastle band – the Chosen Few who lived up to their name and were ‘chosen’ for future success. The band included front man Alan Hull who would later find fame and fortune with Lindisfarne. Following the audition, their manager Bill Keith whisked the Chosen Few off to London. Our manager was a good friend of Bill Keith and as a direct result of the Chosen Few’s relocation many of their outstanding gigs in Newcastle and the northeast came the way of Jazzboard. Amongst those gigs was a handful at West End Boys Club. After our first appearance we built up an instant fan base in the west end of Newcastle and became firm favourites at West End Boys Club. 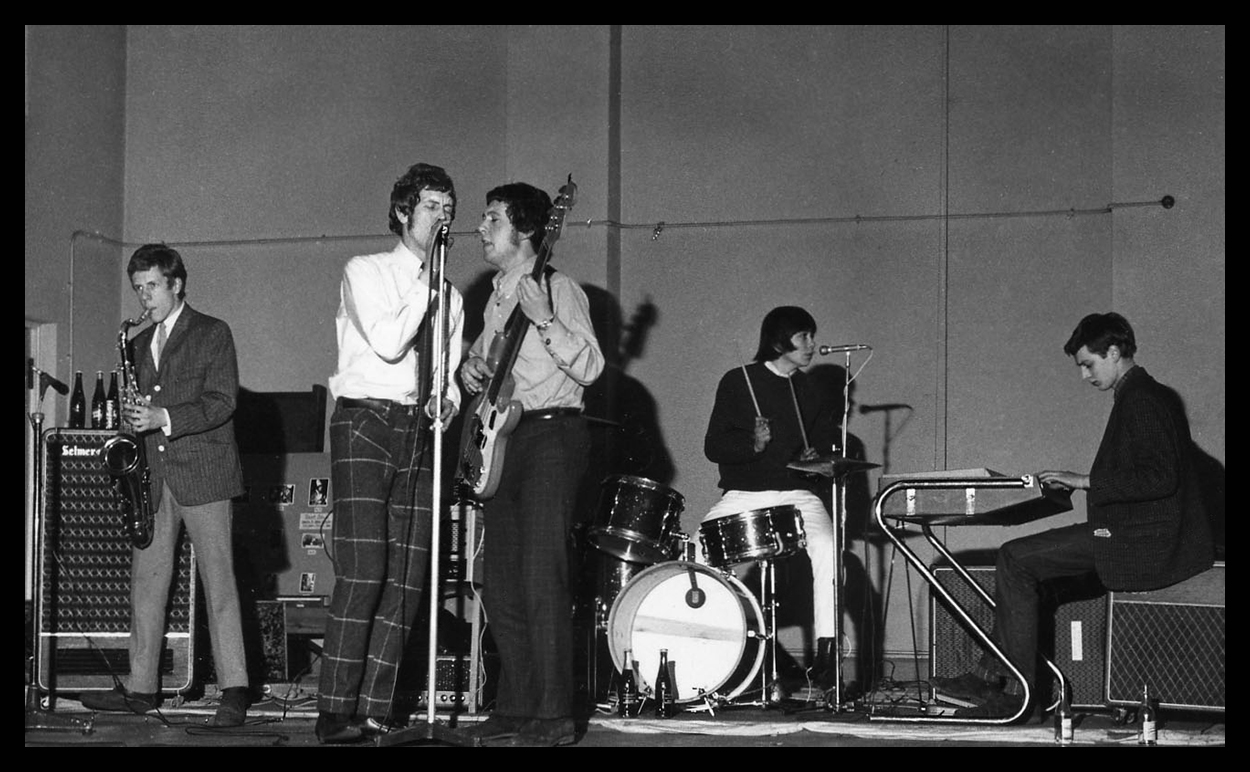 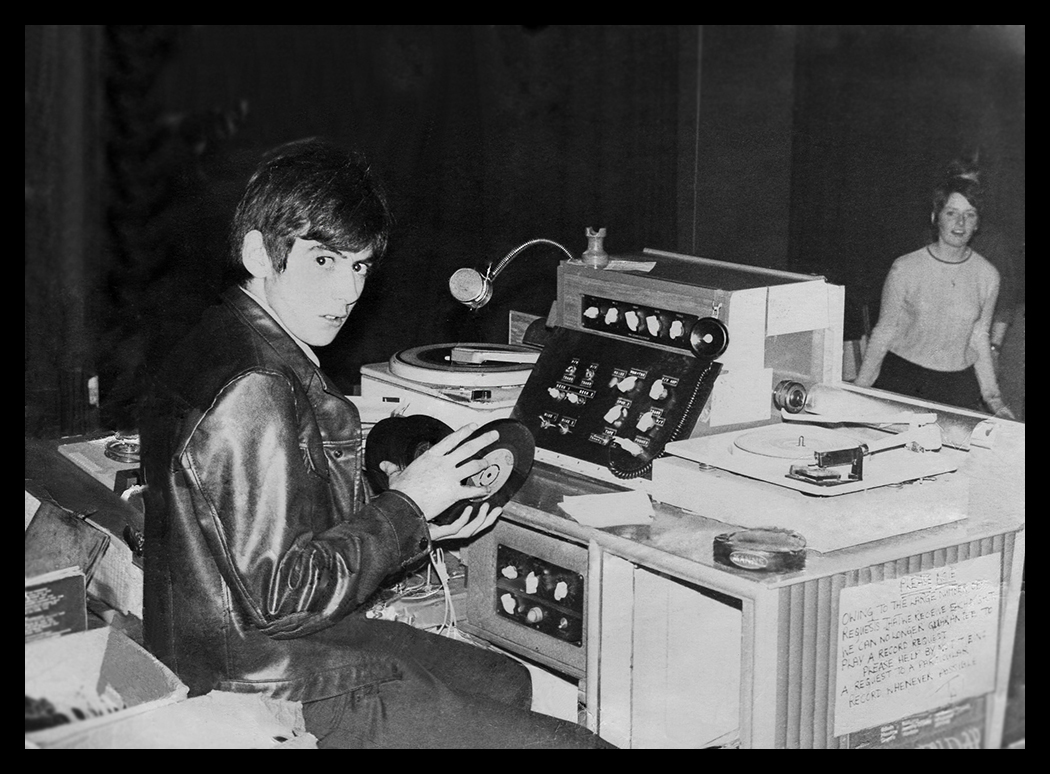 The venue, in spite of its name, had a great atmosphere and on a good night packed in around 400 dancers.

A South Shields venue that rarely gets a mention on the internet is ‘The ‘Golden Slipper Club’ or to give it its pet name ‘The Yella Wellie’. The Golden Slipper ran from the late sixties into the early seventies in competition with South Shields’ Cellar Club. During the week the venue was the Hedworth Hall on Dean Road, Westhoe, which had previously been a masonic lodge. At weekends the venue became the Golden Slipper. 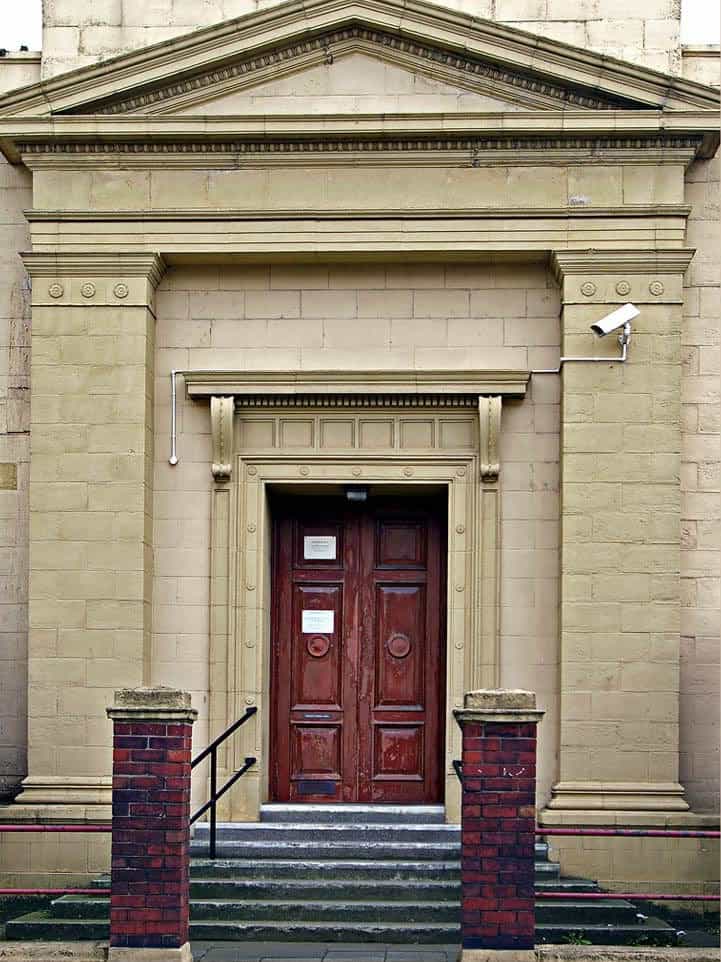 As far as I’m aware it was only local bands that played at the Slipper. The only band I recall appearing there with was Sneeze in either 1969 or 1970. I remember it was quite a large hall with a high stage and a lot of echo. 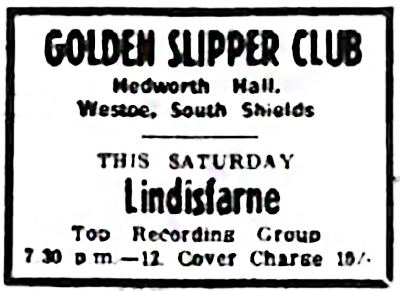 The Yellow Wellie may have had many claims to fame regarding the musicians who performed there and went on to greater things. One claim to fame that I do know about is that the resident DJ who was there when Sneeze performed was none other than Terry Slesser (otherwise know as Terry Wilson-Slesser). Terry, of course, went on to front the northeast band, ‘Beckett’ and then ‘Back Street Crawler’, which featured ex-Free guitarist Paul Kossof. 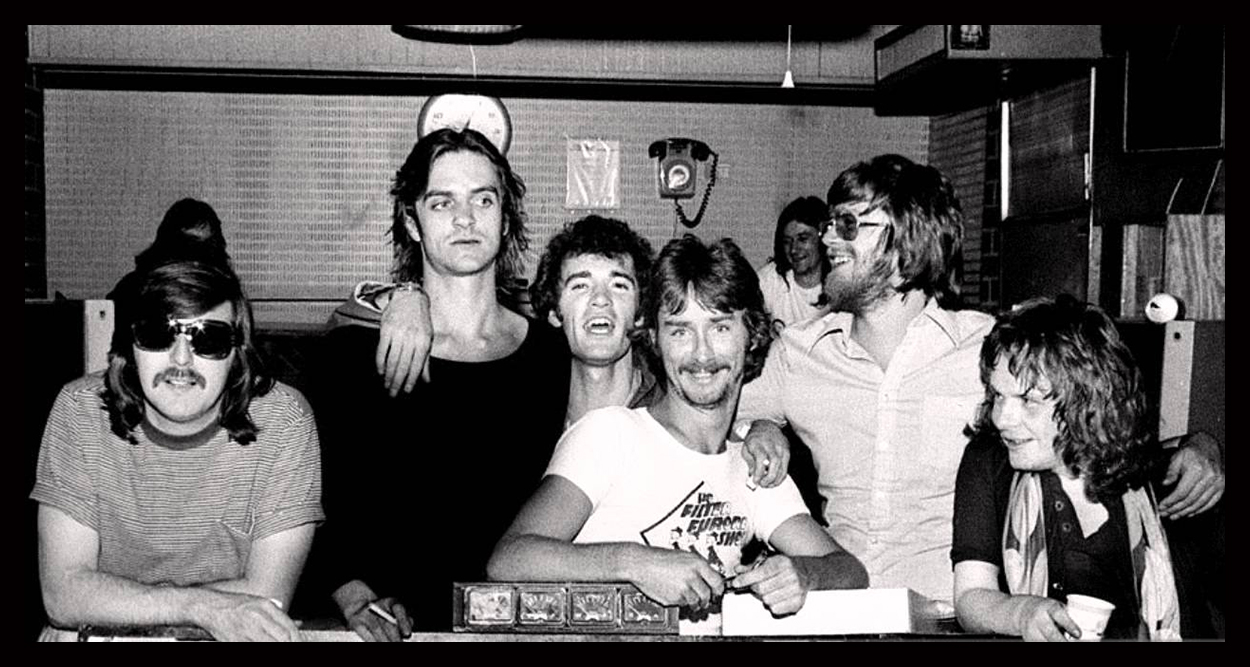 Seahouses in Northumberland is a long way from any sizable city or town, the nearest being Newcastle, which is 50 miles away. It’s not really a place where you would expect to find a major music venue hosting well-known national bands.

In 1969 Ken Britton, a Seahouses based entrepreneur, opened The Viking as a restaurant, bar and music venue. By day it catered for the many tourists attracted to Seahouses because of its picturesque harbour and proximity to both Bamburgh Castle and Holy Island (otherwise known as Lindisfarne). On a weekend the Viking’s main pull was as a live music venue, featuring popular chart or touring bands as well as the best of the local northeast bands. 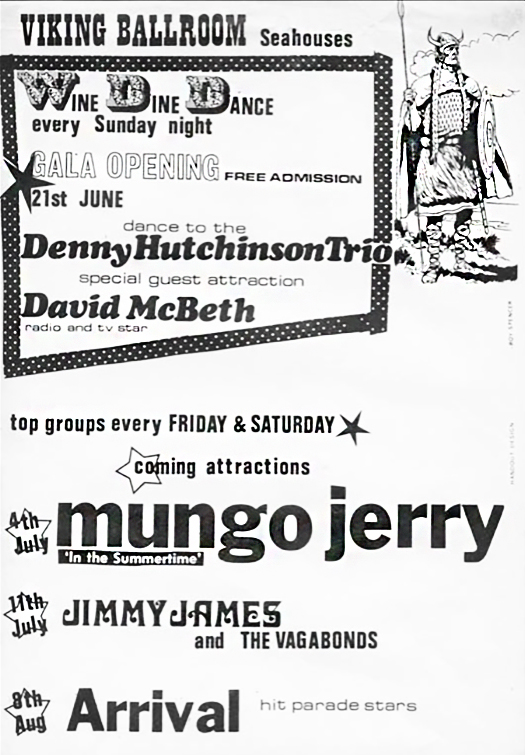 On bank holiday weekends Seahouses was a well-known and popular destination for mods from Newcastle and Sunderland. It’s no wonder that the Saturday night dances at the Viking attracted busloads of punters from outlying areas, including Newcastle. 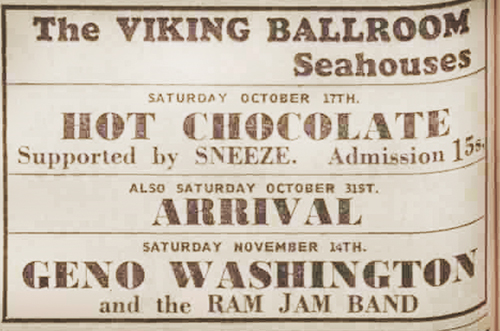 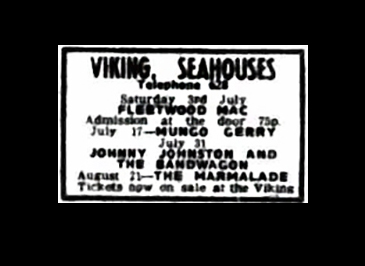 Some of the chart acts that appeared at the Viking were teenage heartthrobs – the Bay City Rollers, Thin Lizzy, Sassafras and Mungo Jerry. My own bands, Sneeze and Scallywag supported quite a few well-known bands at the Viking between 1969 and 1971 including Hot Chocolate and The Equals. 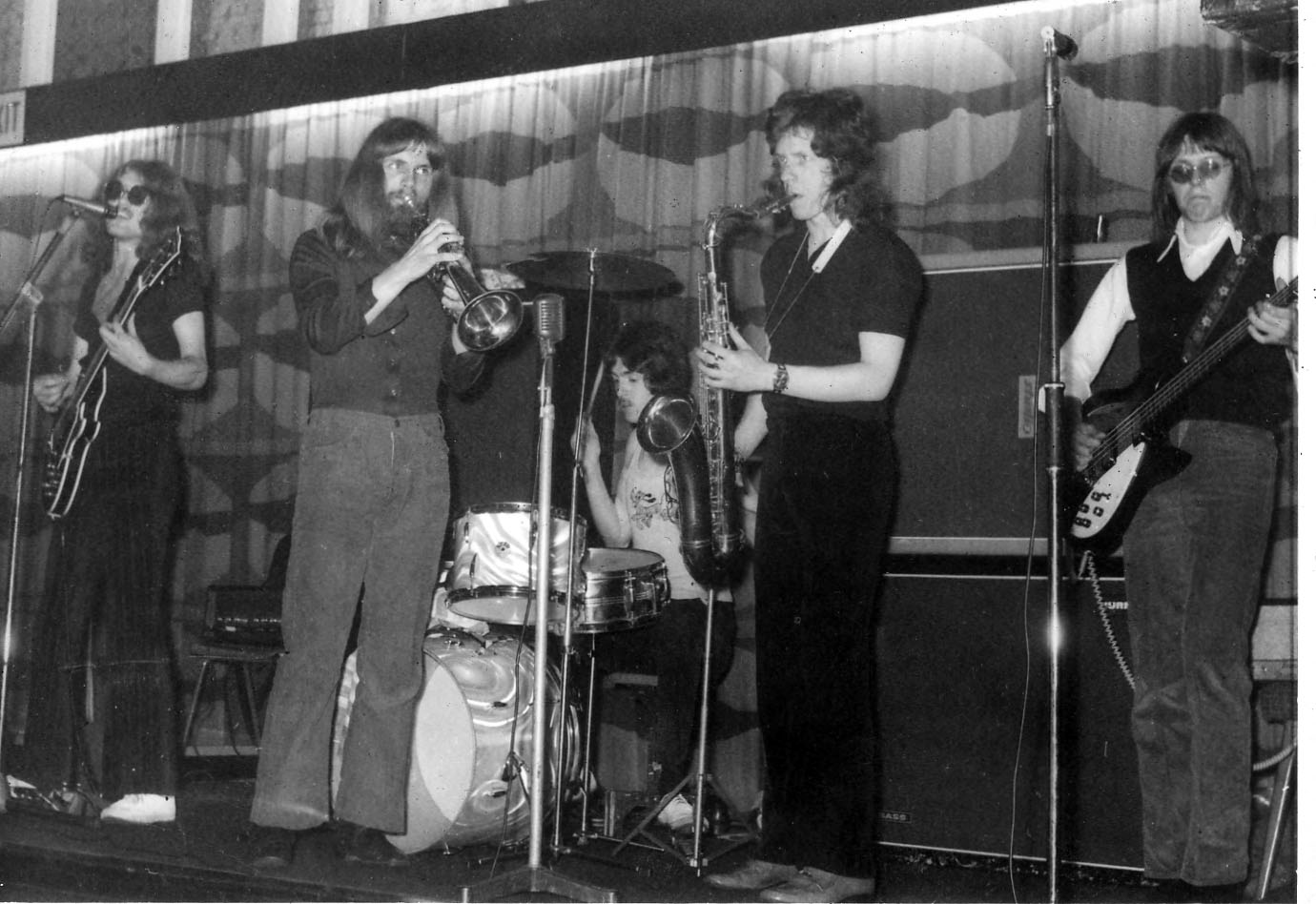 Scallywag at the Viking in 1971 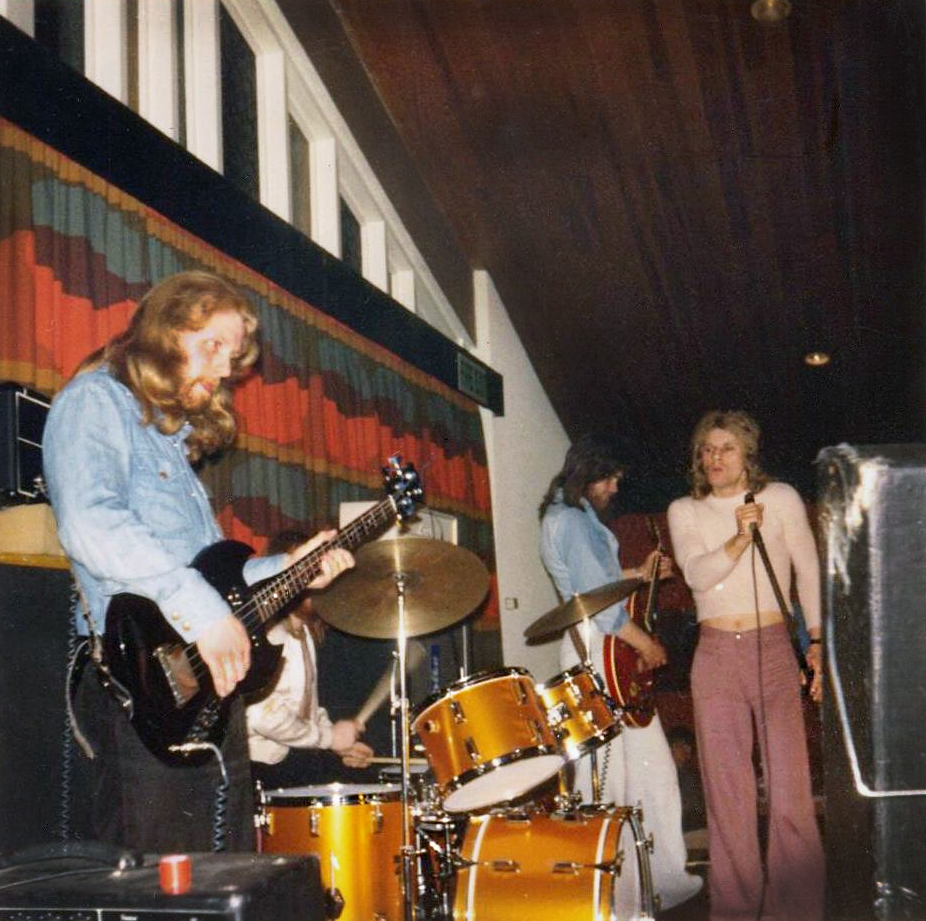 Glider at the Viking around 1973

The 45 Club at Whitley Bay was a popular non-licensed venue in the mid sixties. During the week it was run as a disco with a resident DJ and at weekends ‘live’ bands were booked. Most of the bands were local but some from outside the northeast region often appeared at the club.

I remember the venue being a fairly large square room with an off-centre stage at one end and a soft drinks bar diagonally opposite. The walls were mostly painted black with a musical notation pattern.

I played at the 45 Club many times in 1965 and 1966 with Jazzboard. It was always busy with a crowd consisting of mainly teenagers. Some of the girls we got to know would often travel to Newcastle after the 45 Club had closed and catch the second set in the Jazz Lounge at the Gogo. 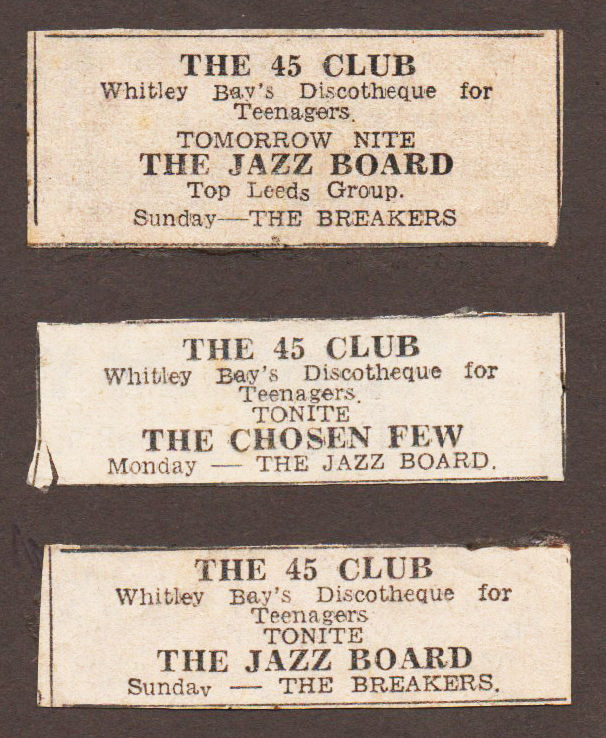 Another Northumberland venue in the middle of nowhere was Haggerston Castle, which is about 10 miles north of Seahouses and only about 7 from the Scottish border.

Haggerston Castle is a large holiday complex on the A1 just south of Berwick. In the sixties and seventies it hosted Saturday night dances featuring live bands in its large ballroom. There were two stages; one for the resident band and one for the visiting band. The ‘resident band’ was booked for four consecutive weeks. Because of its proximity to the Scottish border there was usually a mix of English and Scottish bands. Coaches full of people were brought to the dances from Scotland and the Newcastle area, picking up people in other towns on the way. The place was always packed. Enormous bouncers, who were the first in the area to use two-way radios, quickly extinguished any trouble between rival Scots and English punters. 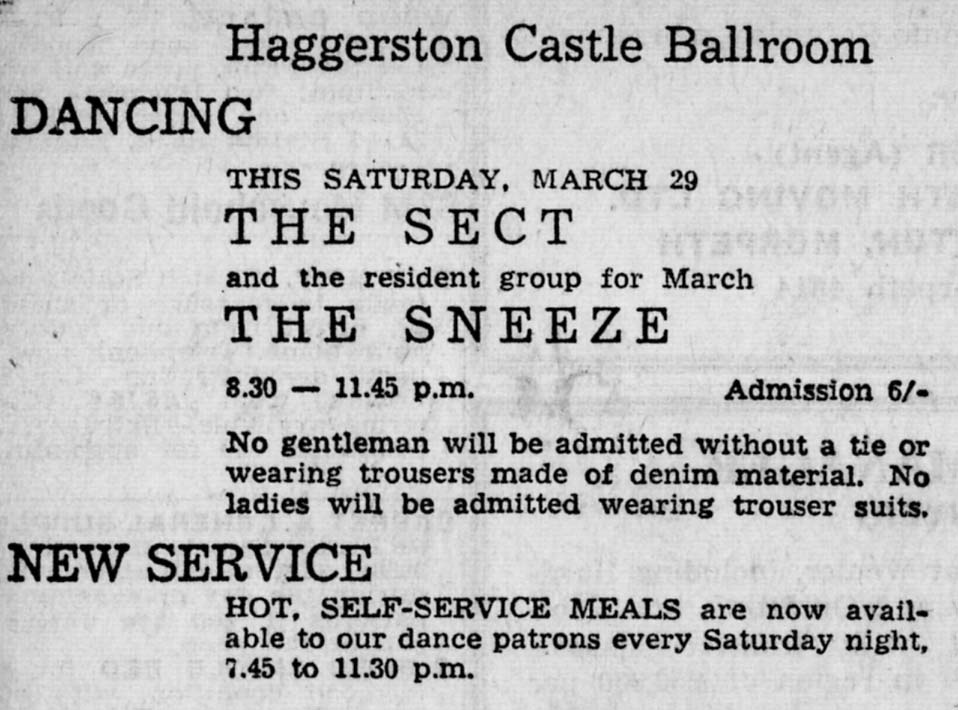 Haggerston Castle was a licensed venue with a large bar adjoining the ballroom. It also had a strict dress code in the sixties; there were no weekend hippies at Haggerston!

Between 1968 and 1970 I appeared at Haggerston Castle in three separate bands; Village, Technique and Sneeze. It was a 70-mile trek from my base in Sunderland but I always looked forward to playing at the venue and invariably had a great night. 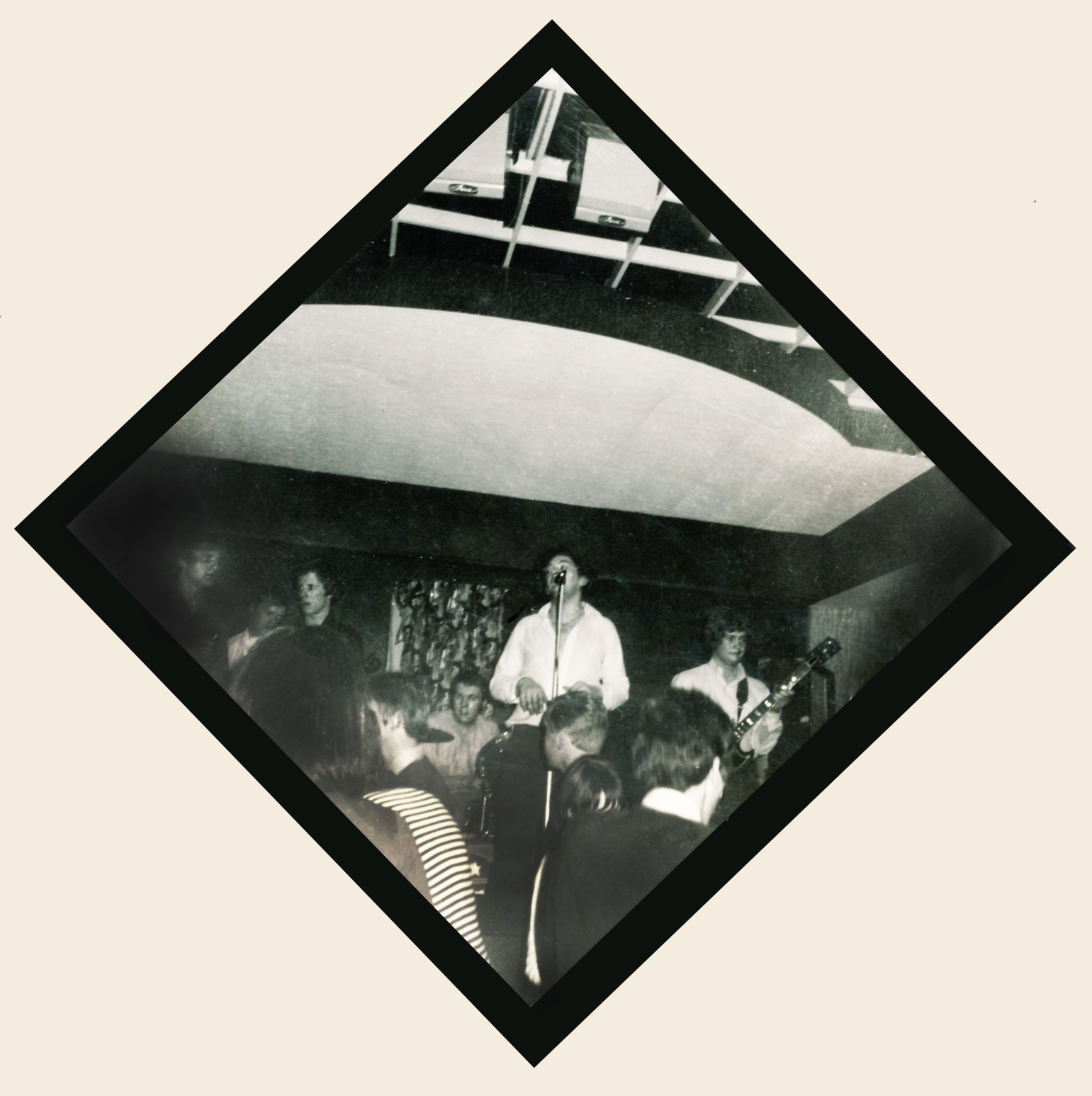 Village at Haggerston Castle in 1968

There are many other great lost northeast venues including the Locarno and Top Rank at Sunderland plus many more in the Teesside area. I’ll be writing about these in the near future.