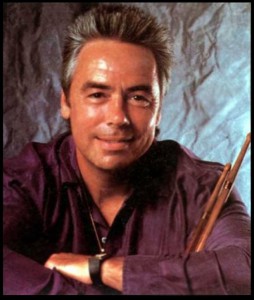 Nigel Olsson, the drummer with Elton John’s band, is unlikely to be looking for work in the near future but if he was, he would have a very impressive CV.

Amongst others, Nigel has drummed with Spencer Davis, Uriah Heep and Plastic Penny.

He has also had a distinguished career as a session drummer. Over the years he has worked with the likes of Rod Stewart, Neil Sedaka, Leo Sayer, Linda Ronstadt and Kiki Dee and many more.

In addition, Nigel has released several solo albums and has had hit singles, such as A Little Bit Of Soap and Dancing Shoes.

Nigel now lives in California, over 5,000 miles away from Sunderland in the UK where he served his musical apprenticeship.

The Fireflies in March 1965

In April 1965 Nigel left the Fireflies to join a band called the Fallout with his guitarist friend, Mick Grabham. The band, featuring organ and sax, played regularly at the popular El Cubana and Blue Note clubs in Sunderland. In July the Fallout changed their name to the Jazzboard.

Later that year I joined the Jazzboard, replacing their sax player, Ron Sweeney. Mick Grabham had left the band and moved to London by then but Nigel was still the drummer, occasionally swapping places with the vocalist, Bruce Lowes, who was also an accomplished drummer.

At the time, I don’t remember thinking that Nigel was an exceptional drummer but there was no doubt about his charismatic personality and his good looks. He always ended up with the best looking girls, got invited to the trendiest parties and mixed with people with wealthy connections.

When I first knew Nigel, he lived at his parents home just off Durham Road in the Otto Terrace area of Sunderland. At one time he worked on a pilot boat at the Port of Sunderland. I think his father had nautical connections – possibly he was a sea captain. The Jazzboard had a big following in the Sunderland area and in 1966 started playing regularly in the Teesside and Newcastle areas sharing the bill with the likes of the Who and the Small Faces. 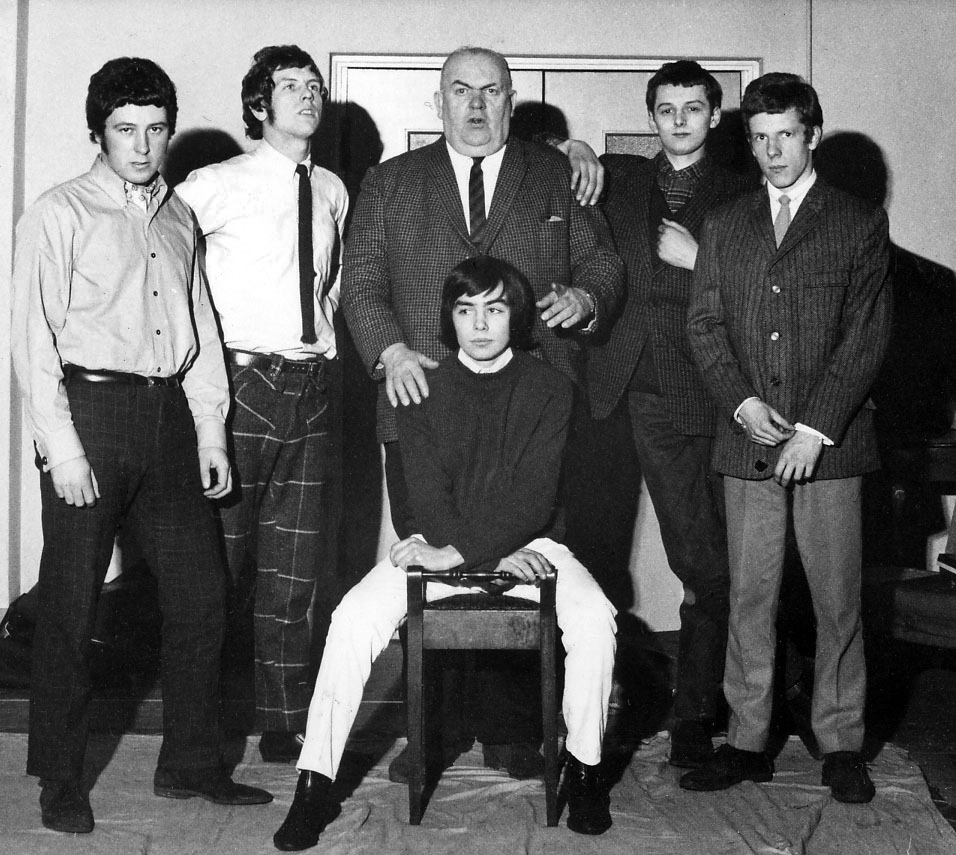 Nigel (seated centre) with the Jazzboard 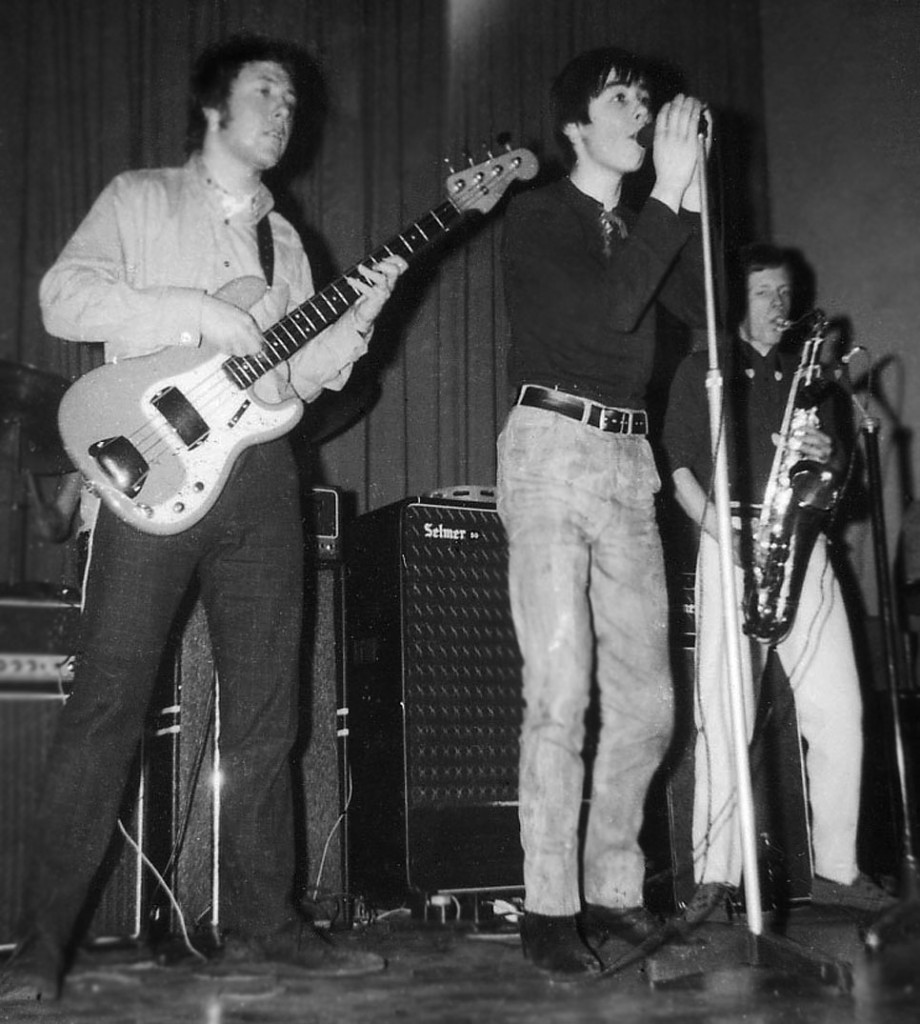 Nigel singing with the Jazzboard

Listen to Nigel Olsson singing Here Me Calling Your Name

After three months of playing in James South, Nigel got his big break when he and his friend Mick Grabham were asked to join Plastic Penny. Plastic Penny had a hit in December 1967 with ‘Everything I Am’. The single was recorded by a vocalist named Brian Keith who at the time was performing in a cabaret band called Chris Lamb and the Originals. He had recorded ‘Everything I Am” as a solo singer with some help from some of the musicians from the Originals, including future Plastic Penny keyboard player, Paul Raymond. Plastic Penny was put together as a performing band after the single started climbing the charts. Nigel’s first appearance with Plastic Penny was in a Christmas holiday screening of Top of the Pops. The band was a bit of a one hit wonder and split up in August 1968.

Nigel then joined Mirage bassist Dee Murray and guitarist Ray Fenwick in a reformed version of the Spencer Davis Group (without Stevie Winwood) touring the United States with them in Autumn 1969. The band split up after the tour.

Elton John who knew Nigel through the Dick James Studios session circuit, pointed him in the direction of singer David Byron who was looking for a drummer for his band, Uriah Heep. Nigel joined the band, playing nine live dates with Uriah Heep and playing on the track “Dreammare” on their debut album “Very ‘eavy, Very ‘umble”.

While he was involved with Uriah Heep, Nigel had also been performing on Elton John’s studio demos. Nigel’s first performance on record with Elton came in 1969, playing on the song “Lady, What’s Tomorrow” on the “Empty Sky” album. Nigel became Elton’s tour drummer in the Spring of 1970 along with his Spencer Davis buddy Dee Murray. The trio debuted at the Roundhouse in London on 21 April 970. Nigel became Elton’s permanent session drummer in 1972 with the release of “Honky Chateau” and stayed on until May 1975, when Elton changed the line-up of his hugely successful band by replacing Nigel and Dee with Roger Pope and Kenny Passarelli. 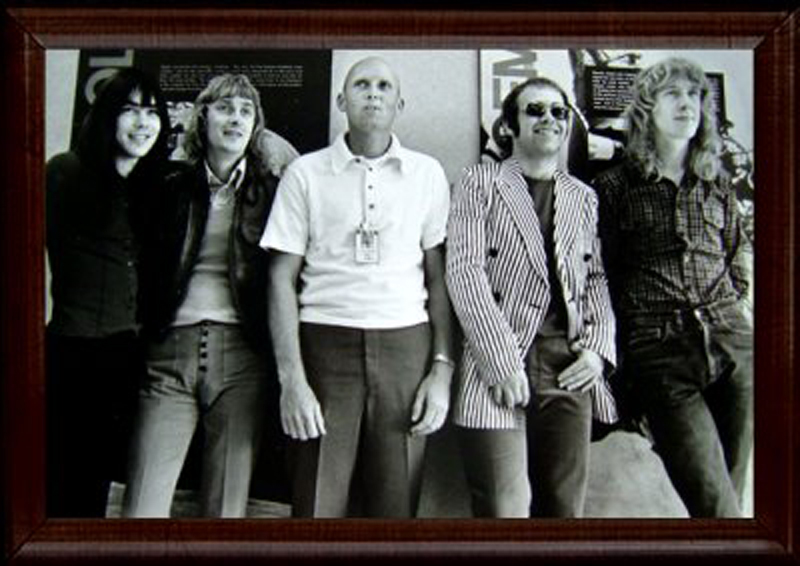 In 1971, Nigel produced and released the solo album “Nigel Olsson’s Drum Orchestra and Chorus” on Universal Records, featuring Dee Murray and early 70’s Elton John guitarist Caleb Quaye. In 1975, after his split with Elton John, Nigel released his second solo album on John’s Rocket Record label. This album featured a minor hit in a cover of the Bee Gees’ “Only One Woman”. The album, produced by Robert Appere, contained few rock numbers but mostly echoed the emerging mid 70’s “Philly” sound of Gamble and Huff.

Nigel continued working as a studio musician, releasing another self-titled album that was produced by Paul Davis on Columbia in 1978. Although that album brought no Top 40 recognition, in 1979, he released the album “Nigel” and enjoyed some mild success as a solo artist, scoring a pair of Top 40 hits on the US Pop charts with “A Little Bit of Soap” and “Dancin’ Shoes,” the latter of which cracked the Top 20 at 18.

In 1980, he released the album “Changing Tides” on CBS’s Bang Records, but the album failed to achieve chart success. The same year, Nigel returned to Elton’s band to begin a four-year tenure, working with John for sessions on albums such as “21 at 33” and “The Fox”. He re-teamed with band mates Dee Murray and Davey Johnstone for the tour behind Elton’s 1982 album “Jump Up!”, and stayed with the reformed classic-era band through the next two albums and tours for “Too Low for Zero” (1983) and “Breaking Hearts” (1984).

Following a lineup change, the band mates would rejoin only once more in 1988 for backing vocals on “Reg Strikes Back” prior to Dee Murray’s death in January, 1992.

Later, in 1991, Olsson teamed up with former band mate Davey Johnstone to form Warpipes. Warpipes was fairly short-lived and disbanded soon after cutting its debut album. Nigel then spent the next few years relaxing in California with his wife Schanda and son Justin, and racing vintage cars for fun. He still lives in Los Angeles.

Nigel returned to Elton John’s band for good in 2000 as part of his touring band, alternating between drums and backing vocals on certain songs. (The songs he did not play drums on, typically the newer songs, were handled by Curt Bisquera.) Nigel took over the full-time touring drumming chores when Bisquera left the band.

In the studio, he played and sang backing vocals on several tracks on Elton’s “Songs From the West Coast” (2001). He then played all drums on “Peachtree Road” (2004) and “The Captain & The Kid” (2006), as well as continuing in the touring band along with Davey Johnstone, Bob Birch (bass), Guy Babylon (keyboards) and John Mahon (percussion). 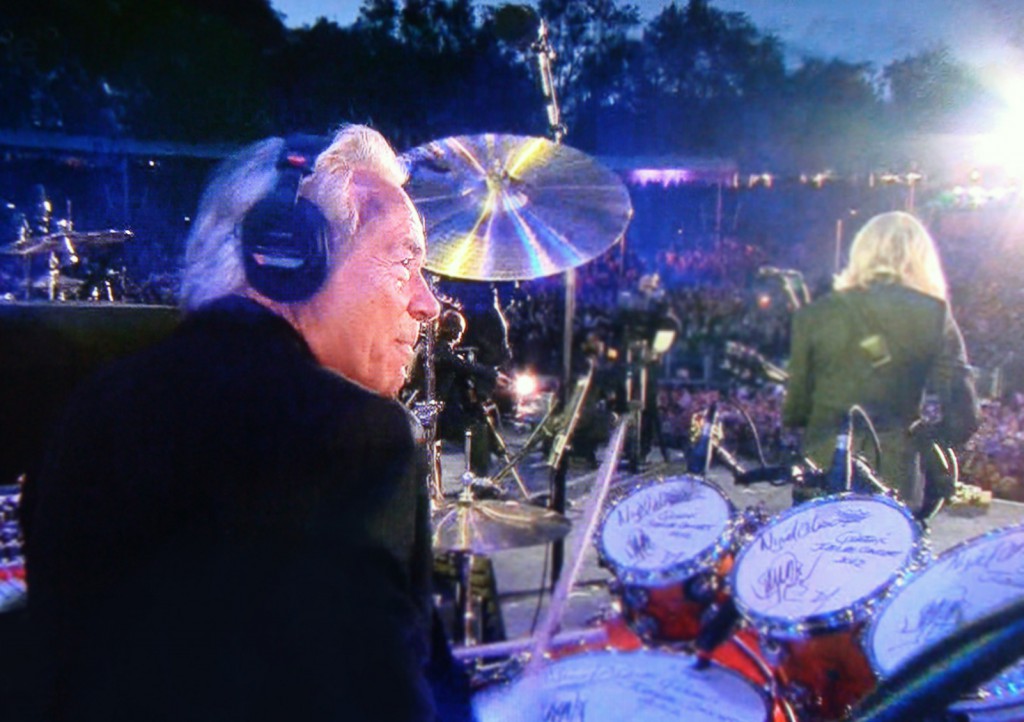 For lot’s more information about Nigel, check out his excellent official web site and fan club.