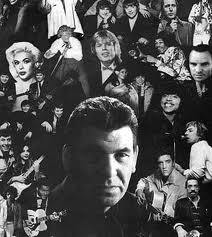 Anyway, while I was reading the book I got thinking about the dozen or so ‘roadies’ who were around when I played in north east bands in the sixties and seventies. Each had his own ideas about what duties a roadie should perform so it’s not surprising that they all did their own thing, which was considerably different to the expectations of the band. Here’s a wish list of the things you would have wanted a roadie to do back then: –

– Load up the band’s van
– Pick up the band members in the van
– Drive the band and gear to a gig
– Unload the van, carry the gear into the venue and set it up
– During the performance; make sure that the band had a continuous supply of drinks.
– For the band members who didn’t have a WAG, chat up groupies on their behalf for later.
– After the performance – take down the gear and pack it in the van.
– Drive the band, retinue, equipment and any newly acquired groupies home.
– (There was no off stage mixer in those days so you wouldn’t expect a roadie to do any sound engineering during a performance)

Most important of all – you wouldn’t expect to pay a roadie because being part of a band should have been payment enough. In any case there were lots of other people queuing up to do the job for nothing.

It’s because these ‘roadies’ never got paid that they went their own way, probably doing no more than a couple of items from the above list. 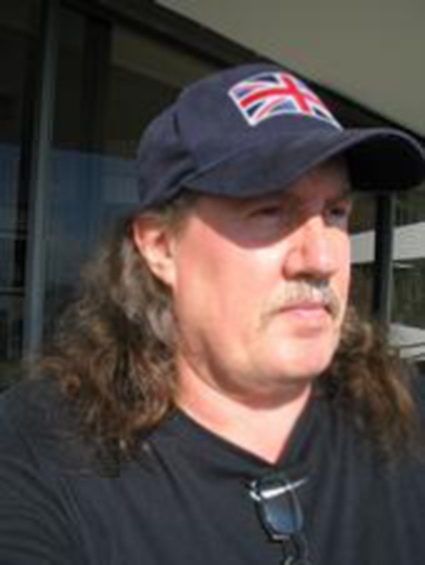 The first roadie I knew was a guy called Colin Hart from South Shields. He joined the Jazzboard in 1967, primarily to drive the band’s old ambulance to and from gigs. At the time he had a full-time job for South Shields Council. Colin quickly became a part of the band and did his share of humping equipment. He was also good at rounding up groupies. Unfortunately for the rest of the band, he kept most of them for himself.

Colin’s grounding with the Jazzboard gave him a taste for life on the road. Years later he became the tour manager for Deep Purple and Ritchie Blackmore. A while ago Colin contacted me and gave me the low down on his career.

“I moved on after The Jazzboard to work for Toby Twirl for a couple of years, working out of the Bailey Organization at the Latino in Shields. From there I got a gig with Vanity Fare, then Matthews Southern Comfort, which took me to the USA for my first tour, with MSC, Deep Purple and Rod Stewart and the Faces. What a tour that was! Anyway, by the end of the tour I was offered a job with Purple, which I took. Made my way up to tour manager for them and then left with Ritchie to do all the Rainbow years with him, then back to Deep Purple as Tour Manager until I left in 2001. Then I worked for Living Loud for their album etc. and worked for a theatre called Legends in Concert in Hollywood, Florida for a year before returning to Orlando again, which is where I currently live. In between, I worked for Elf and Tucky Buzzard and a few other bits and pieces, including a couple of weeks looking after Barbie Benton in Hollywood, California. Anyway, settled again here in Orlando and now work for Greg Rike Productions, which includes the Living Legends website and our audio/video studios.” 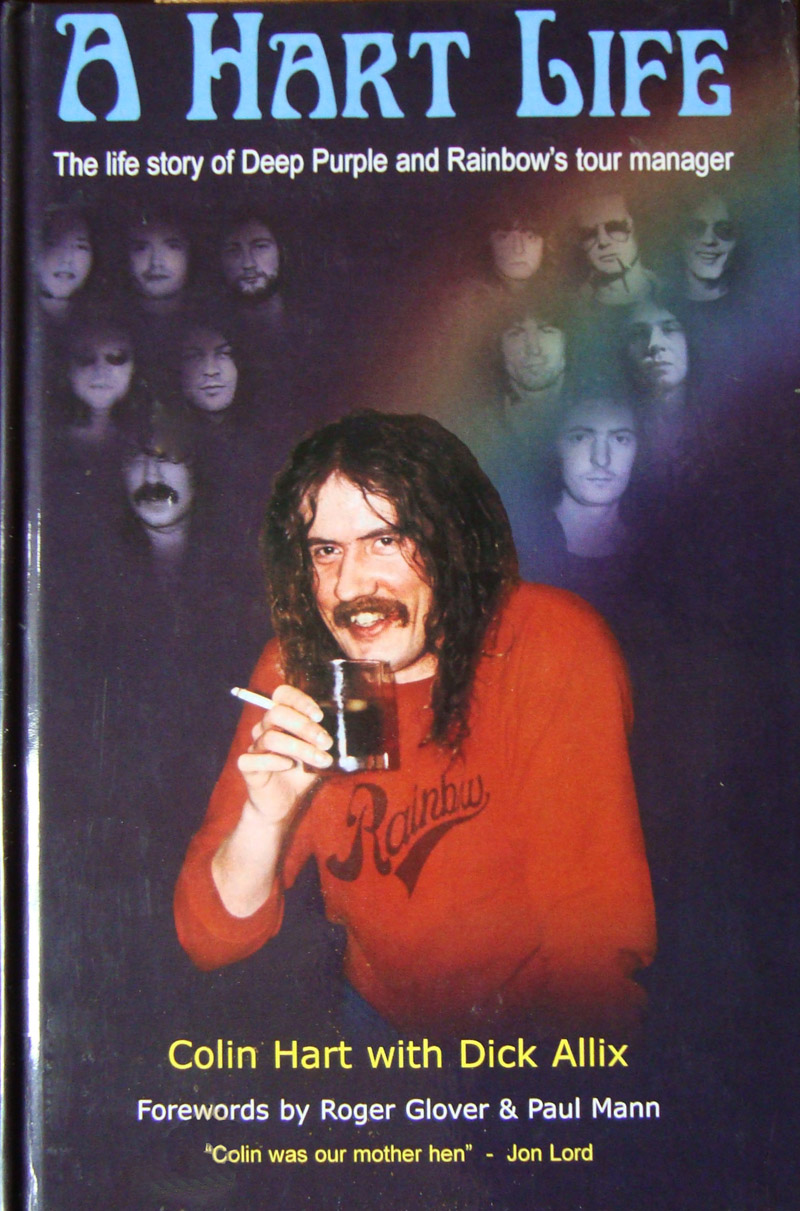 Colin has written a book about his days on the road with Rainbow and Deep Purple. It’s called “A Hart Life” and is available either as a hardback or in Kindle format from Amazon. It’s a good read for anyone interested in Purple, Rainbow or Ritchie Blackmore. The book includes a lot of Colin’s personal photos from his years as a roadie and tour manager including the picture below of Colin with the late George Harrison. 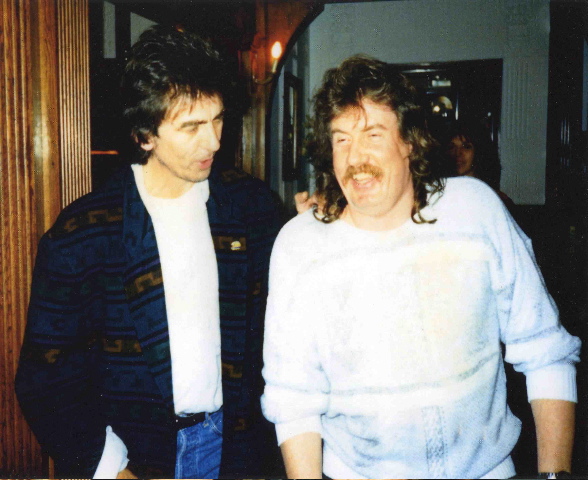 A year after the Jazzboard broke up I was in a band called the Village whose means of transport was also an old ambulance driven by a roadie called Ossie. Other than driving the ambulance I can’t remember him doing much else. 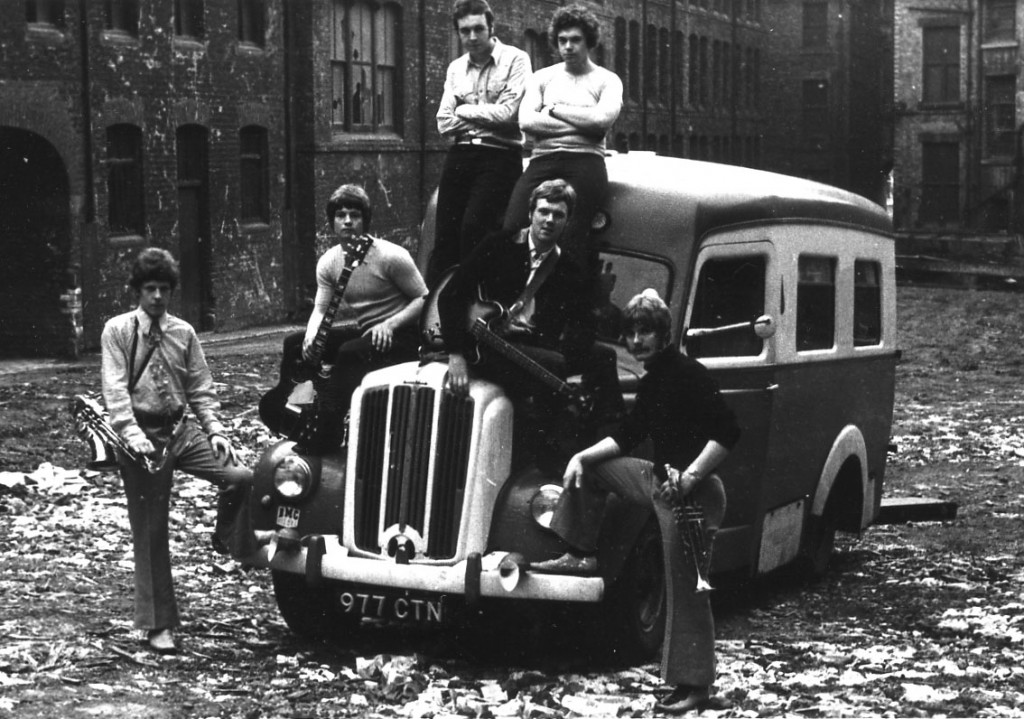 Ossie’s speciality was falling asleep at the wheel on the way home from a gig so we all had to take it in turns to try and keep him awake. The Village later recruited another roadie called Arthur Riddleston, affectionately known as ‘Twiz’ because of his resemblance to a TV puppet called Twizzle. Twiz talked his way into the Village on the basis that he had previously roadied for a few other Newcastle and Gateshead bands. He couldn’t drive and knew nothing about amplification or drums but, according to him, his lack of knowledge of all things musical was compensated by the fact that he was the best ‘humper’ in the business.

He also had the hardest head in the business. The Quay Club in Newcastle had a steep staircase with a low ceiling leading to a cellar room where the bands performed. It also had big sign saying “MIND YOUR HEAD”. Every time (and I mean every time) Twiz took our equipment down the stairs, his head came into contact with the ceiling leaving a bloodied imprint of a forehead and an effective warning to others about the folly of ignoring the sign. 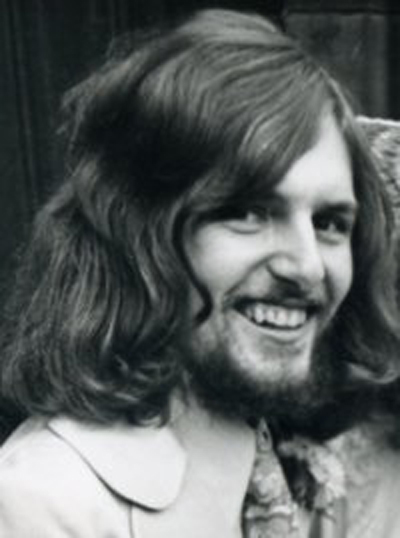 When the Village broke up, myself and some of the band members formed a new band called Sneeze. Twiz followed us. Another roadie called Derek Scott (pictured) also joined Sneeze. Derek, otherwise known as Dek or Custer (because he looked like a Hollywood type image of General Custer) couldn’t drive but at least he knew a little bit about wiring up a PA system. So between them, Dek and Twiz could fulfil about three items from the wish list – enough to justify their places in the band but not enough to warrant them getting paid for their services. Dek also knew more raucous songs than any man alive including all twenty odd verses of the Wild West Show, which he insisted on singing on the way home from gigs when the rest of us just wanted to sleep.

The role of the roadie has changed over the decades and now, even in local bands unless there is a dedicated sound engineer, a roadie is expected to know how to set up a PA to get the best out of a venue and be able to mix the sound so that the band sounds perfect. Back in the sixties being a roadie in a local band required no particular talent. If you couldn’t play an instrument it was as near as you could get to being a band member. Roadies in local bands who did have ambition and talent, people like Tappy Wright and Colin Hart, found their own level and often ended up in top named bands.