The Rex Hotel, an impressive looking Victorian building on the sea front at Whitley Bay, was a popular venue for both local and national bands from the mid sixties through to the late seventies. I first played there in 1968 with a band called the Village and for the next three years or so it became one of my favourite venues, both as a performer and a punter. I remember seeing the late great Robert Palmer singing at the Rex sometime in 1969 with the Alan Bown Set just after he had replaced Jess Roden.

Local bands were booked at the Rex for a weekend or for one night only. Sometimes you got to support a named band. I recall supporting a couple of chart bands there in 1969 – Love Affair and Simon Dupree and the Big Sound who had charted a couple of years earlier with ‘Kites’. 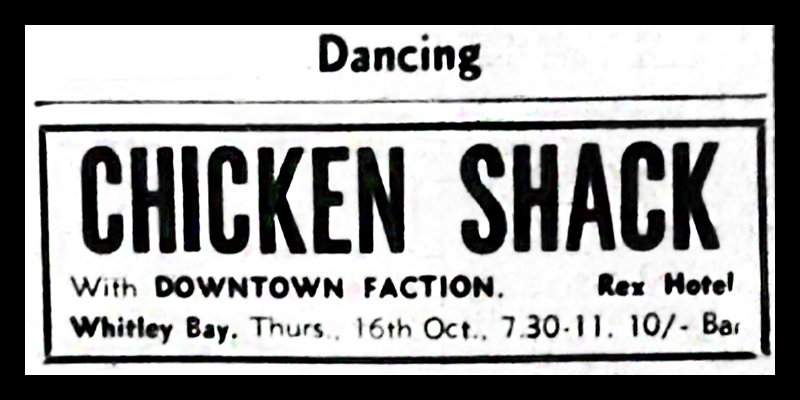 In 1969 a lot of top named acts were booked at the Rex, usually supported by a local north east band. Some of the bands that appeared at the venue in 1969 were: Status Quo, the Troggs, the Foundations, Vanity Fair, Chicken Shack and Family. 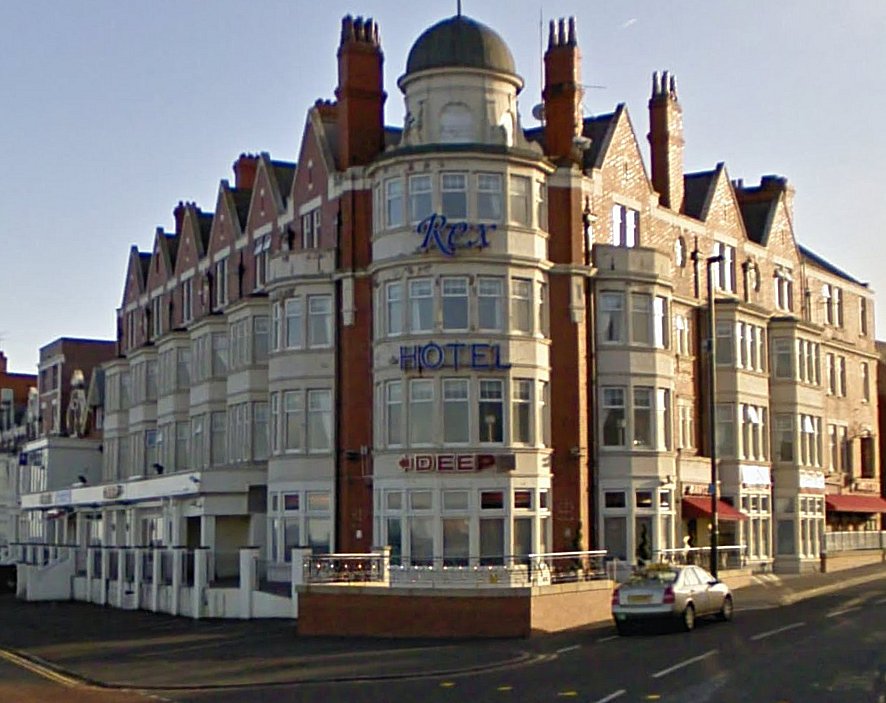 North east promoter, Ray Grehan began putting on gigs at the Rex Hotel in 1970. Ray was the owner of the nearby Crescendo Club. Although the Rex was a licensed venue it drew in a much younger age group than the Crescendo. Perhaps hoping to draw teenagers into the Rex and an older crowd into the Crescendo on the same night, he booked some top named bands to appear at The Rex and later the same evening at the Crescendo. Some of the bands that appeared at Ray Grehan’s “dual” venue were: the Coasters (from the USA), Gebo Washington and the Ram Jam Band, Zoot Money & Dantallion’s Chariot, the Herd and Edison Lighthouse. 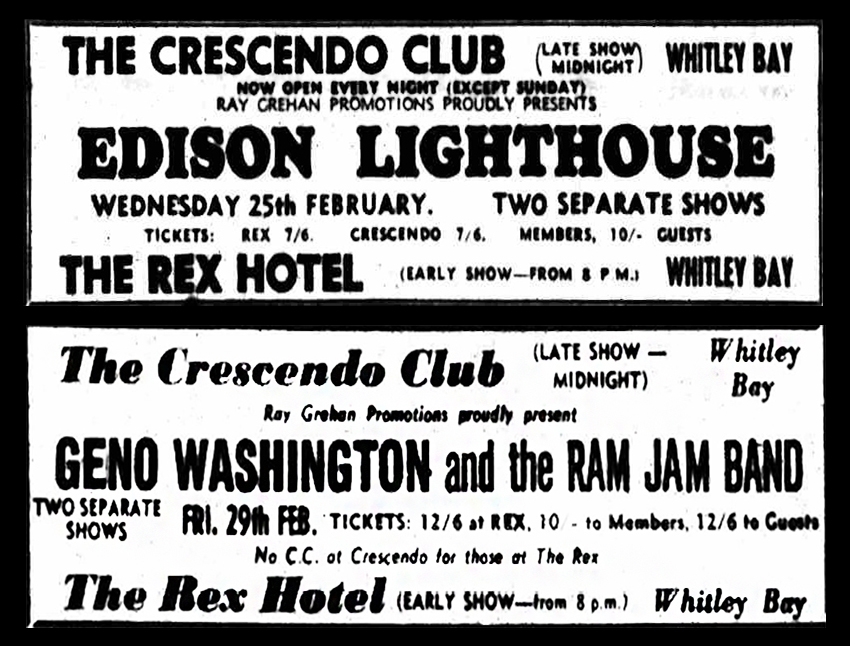 In his memoirs “Beats Working”, Keith Fisher, the drummer with 70’s band Beckett describes what it was like to gig at the Rex: –

“……it was an unusual and attractive booking for bands in more ways than one: the principal oddity being that you could be booked to play the weekend as residents, or purely on the Monday night, as the guests. This is how it worked. . .
If you were booked to play the weekend you started on the Saturday night. The dance floor, which was huge (a proper ballroom), was cleared of tables and chairs which were set up around the perimeter. The stage was overhung by a balcony above, right in the middle at the back, just where the drummer set up; a nightmare for me, sat up high behind my over-indulgent kit and grossly elevated cymbals. The bar was immediately ‘stage-left’ and amounted to little more than a walk-through closet which you entered by the stage and bought your Dog (Newcastle Brown Ale) from the bottle-juggling-barman: Don. Forget ‘Cocktail’, Tom Cruise wouldn’t have lasted five minutes keeping up with the pace that Don achieved. Then you exited through the other door out into the ballroom. If you were a musician, you stood in a line by the side of the stage to better scrutinise the competition; your bottle tucked under your arm, ready to top-up your half pint glass. 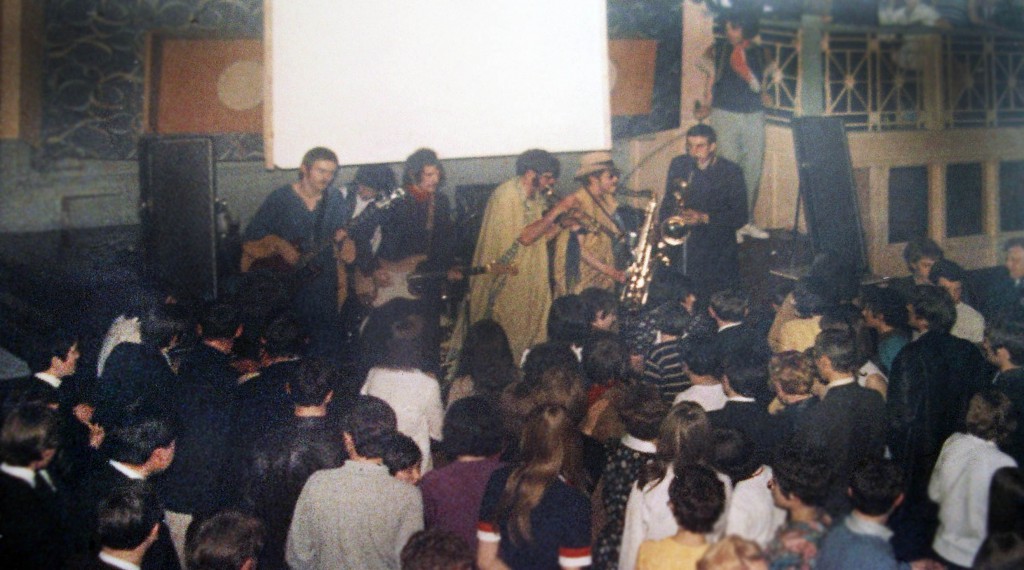 Mr Poobah’s Chcago Line at the Rex in 1969. The downstairs bar (mentioned above) is on the right of the picture 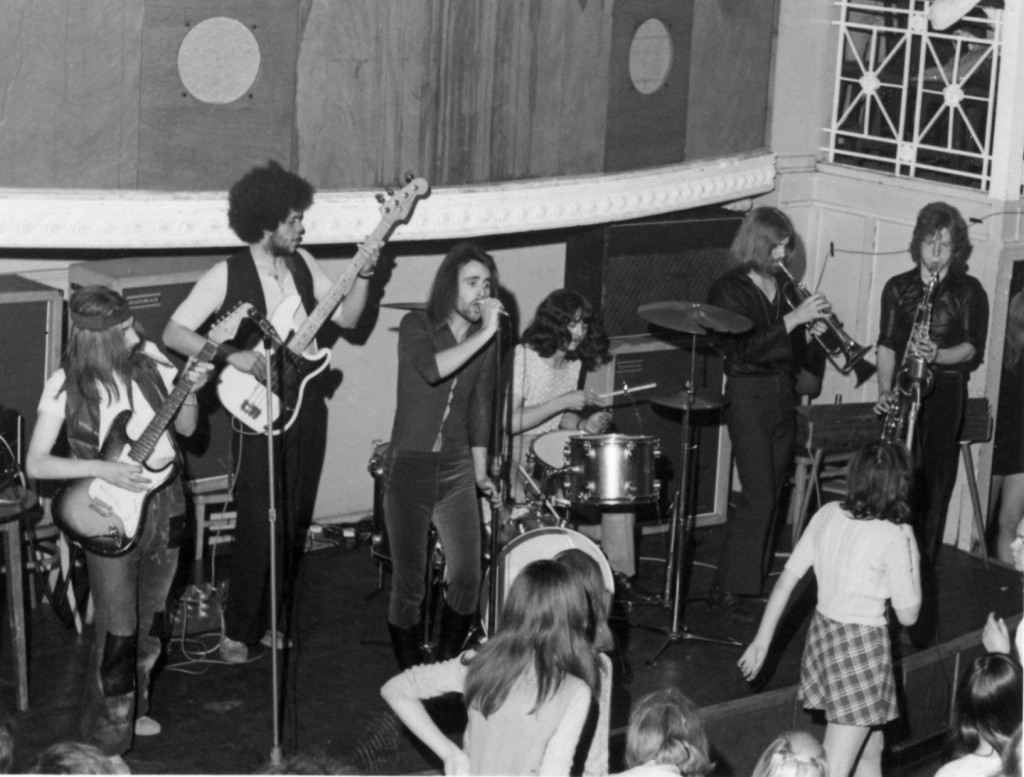 “The dressing-room (a supreme euphemism) was stage-right and was the kitchens for the ballroom. Big, shiny, stainless-steel benches in abundance, but no mirrors or chairs, and certainly no gratis drinks or nibbles to fortify the body and soul. You played two hour-long sets and left your gear set up for the following night’s show. The Sunday show differed in that the dance floor was set-out with all the tables and chairs to produce what was essentially a concert room. Again, you played for two hours, and again you got to walk away from your gear, which stayed for the Monday night show. Monday nights were the best in some respects: namely that you shared the bill with another group, who were booked for just the one night. I do remember the confusion as one band attempted to shift all their gear off the stage and into the dressing room, as the other band tried to do the opposite. Finally: and I am sure we were all guilty… it is human nature… but we never played The Rex without striving to “play-off” the other band; either as guests or residents. It was good natured competition, and it promoted a hearty determination to be as good as possible: which is never a bad thing.” 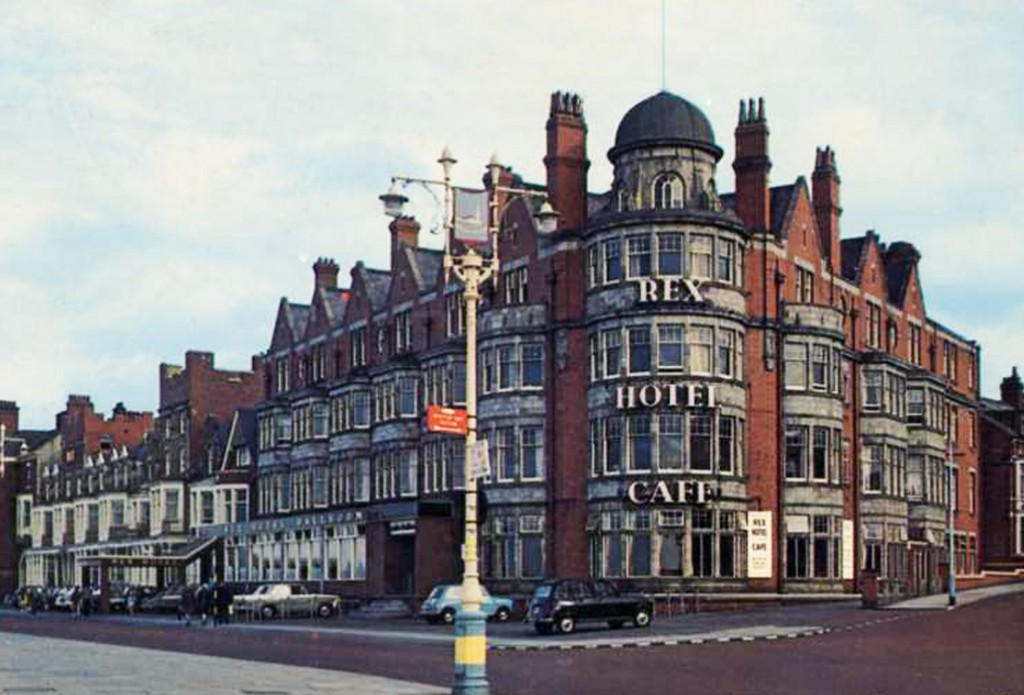 The Rex in the sixties

Another person who remembers playing at the Rex is Eddie Martin, who was the vocalist with both Mr Poobahs Chigago Line and The Sect: –

“I used to love playing at the Rex, sometimes we would do the Saturday, Sunday and Monday off the belt and sometimes just the Monday. I remember playing with the band – the Downtown Faction from who a couple of players went on to form Lindisfarne. We played on the stage and they set up at the opposite end of the ball room.”

Eddie Martin from Mr Poobah’s Chicago Line (on the right)

Steve Thompson, the bass player from seventies band Bullfrog also has memories of the Rex: –

“A regular gig was the Rex Hotel in Whitley Bay. This was in a large ballroom and quite a big gig, always with TWO local bands. The first band to arrive was told to set up on one stage and that they would be performing first. The next to arrive was told to set up on the other stage at the opposite end of the ballroom. They would perform last. This meant that if you arrived last you had the appearance of being top of the bill. You can be sure that we always tried to arrive last and if we got to the venue and did not see another van unloading, we drove round a bit to delay even more.

The embarrassing thing that was we often saw other Transit vans (looking potentially like the other band) also driving aimlessly around the streets of Whitley Bay.”

(More about Bullfrog on this link).

Brethren, an early incarnation of Lindisfarne (before Alan Hull) were regular performers at the Rex in 1969. Around this time Alan Hull had left his full-time job in nursing to concentrate on performing at a folk club which he organised at the Rex. Artists that are said to have performed at the folk club early in their careers are – Al Stewart, Gerry Rafferty, Billy Connolly and Ralph McTell. In 1970 Alan Hull and Brethren appeared regularly at the Rex Folk & Arts Club as separate acts before getting together as Lindisfarne later that year.

More photos of Sneeze and Mr Poobah’s Chicago Line at the Rex: – 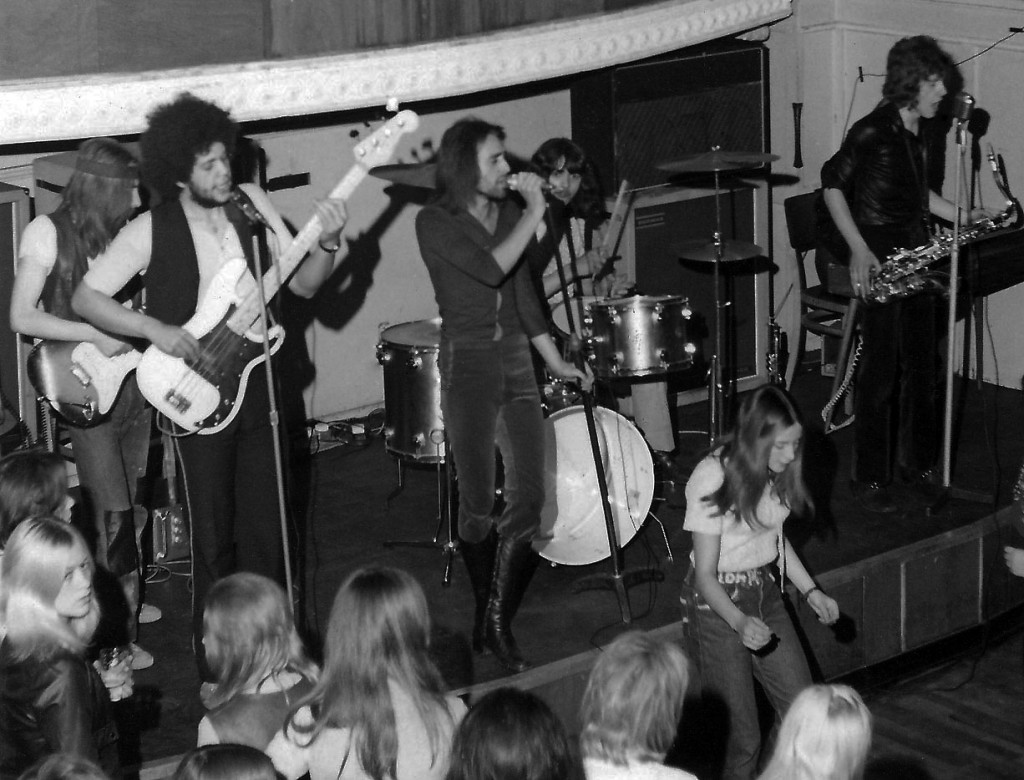 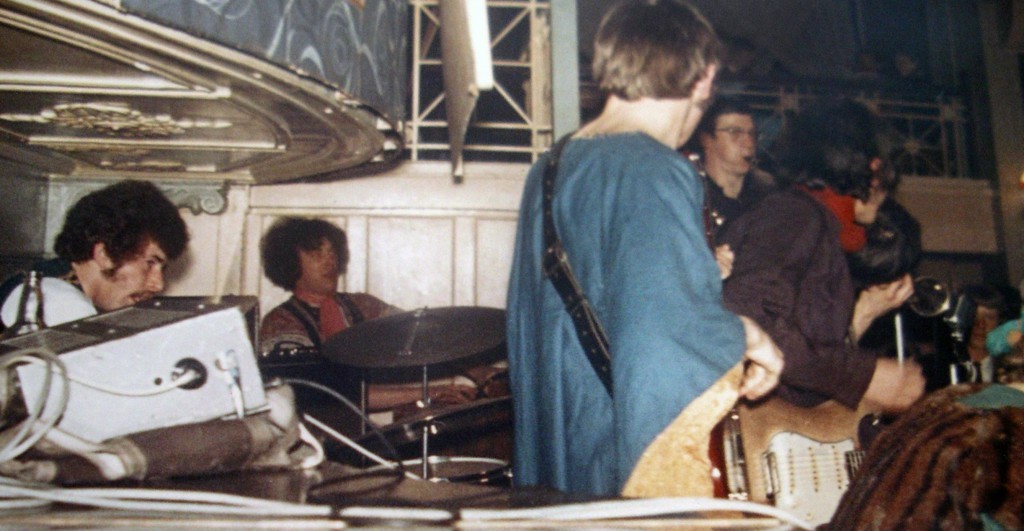 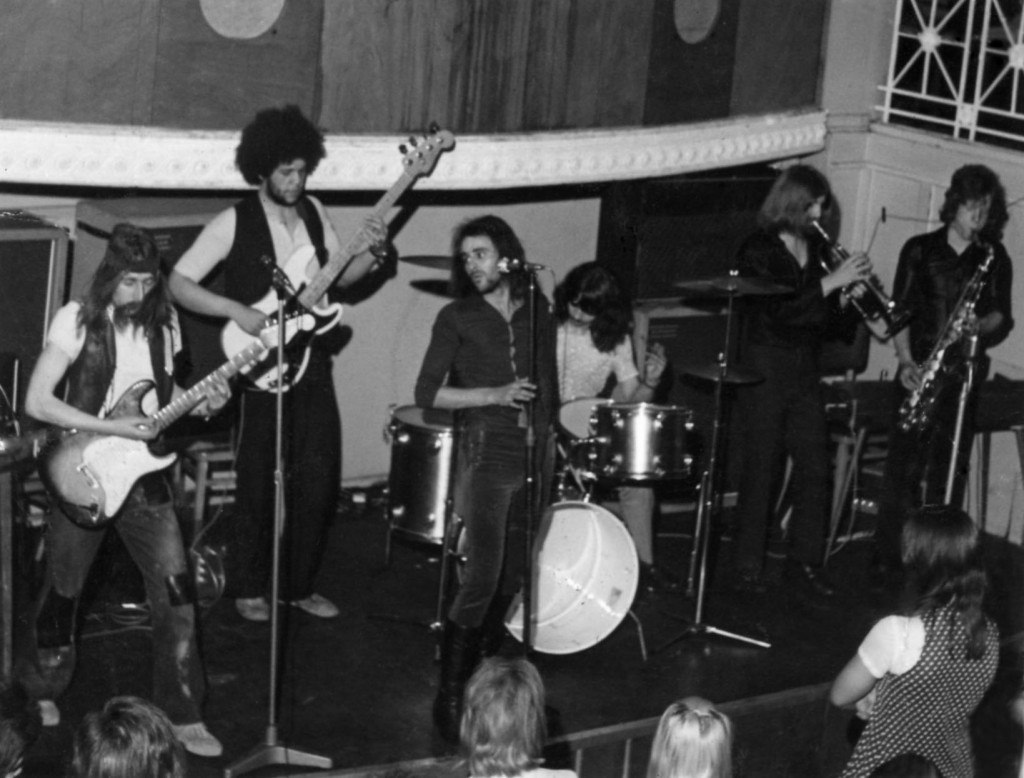