Right Back Where We Started From

“Right back where we started from” in the context of this web site is a return to 1965, the year that both the Mayfair Ballroom and the Club A’Gogo were two of the best music venues in Newcastle.

If you are a regular visitor to Ready Steady Gone or are familiar with its main theme (the north east music scene from 1965 to 1972) then you should be aware of some, if not all, of the great venues that were in existence back in the sixties and early seventies.

I no longer live in the north east, I’m about 320 miles from Newcastle, so it was quite by chance that I found out about two separate projects that will come to fruition shortly. Each one will attempt to recreate the feel of an iconic defunct north east venue; the Club A’Gogo and the Mayfair Ballrroom. Both the original venues are featured in Ready Steady Gone. In fact, the Club A’Gogo page is the most visited page on the site. At the present time there are 492 comments about the Gogo, mostly written by ex-Club A’Gogo regulars who paint a picture of the great times people had at the club in its heyday.

The Club A’Gogo revival nights are to take place at the Bridge Hotel, Newcastle next year. The original Club A’Gogo was in existence between 1962 and 1968. From around 1964 the club became a magnet for Mods and that’s the audience that the organisers are hoping to attract to their revival evenings. In an interview with the Evening Chronicle, Paul Donnelly one of the organisers said: –

“The music we will feature is late-1950s/pre-1964 R’n’B, with later 1960s songs thrown in as the DJs feel. So you’re talking the likes of Slim Harpo, Howlin’ Wolf, early Rolling Stones, The Animals, Muddy Waters, The Yardbirds and more. The events we go to around the UK have a varied age range, from 18-year-olds discovering mod for the first time, 1980s mods who are now in their late 40s and 50s, and original 1960s mods who are in their 70s.”

Whereas, the Club A’Gogo revival will try and recreate the music and dancing of the era as well as encourage some of the old Gogo regulars to come and talk about their experiences, the Mayfair project is a bit different.

The owners of the new Mayfair bar are hoping that its proximity to the site of the original Mayfair Ballroom on Newgate Street and a makeover inspired by the Mayfair’s past will draw in crowds who enjoyed the rock venue’s heyday as well as a new generation of diners and drinkers. There will be a live DJ playing on a Friday and Saturday evening and there will be a soul session every Sunday (Souled out Sunday) between 4pm and 8pm. 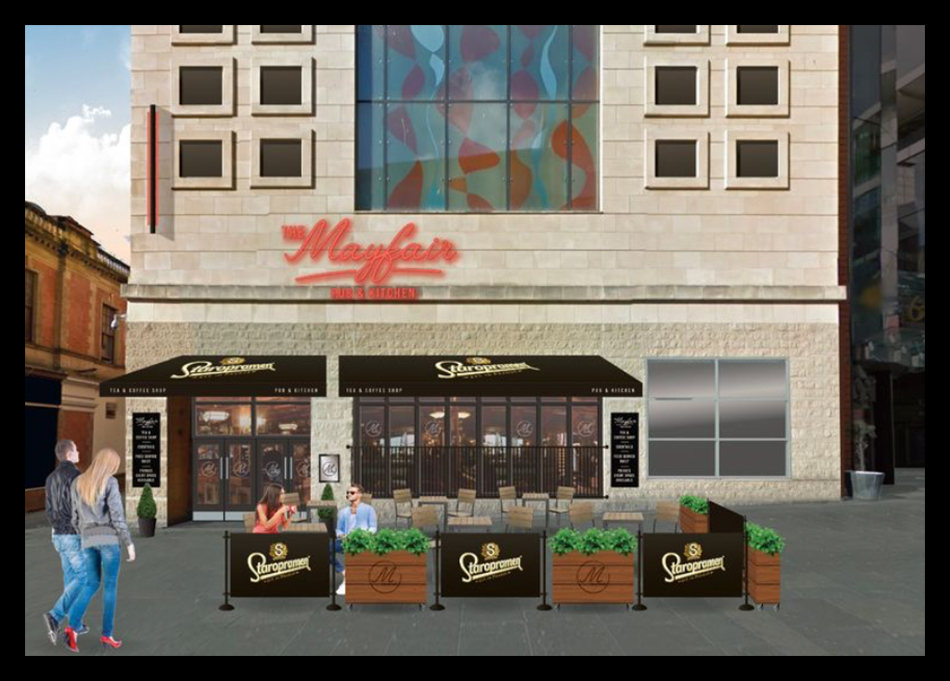 A few weeks ago a representative from the Mayfair team contacted me to find out if I had any photos of the original Mayfair’s interior and its clientele in the late sixties or early seventies. The idea was to decorate the new bar with some nostalgic photos of the original venue. Very few people had good cameras back then so I wasn’t able to help.

By all accounts the new Club A’Gogo events are set to be a great success with a predicted sell-out for the inaugural evening on 25th January 2020. The new Mayfair bar should be opening a few weeks before Christmas. I hope both projects do well and help keep the memory of both those iconic venues alive. Had I still lived in the north east I would definitely have visited both places.

Getting back to the title of this piece – “Right back where we started from”, I thought I’d conclude by writing a bit about a talented musician from South Shields; a singer/song writer who never achieved the recognition he deserves, in particular in the north east.

In August 1975 a catchy soul/disco song reached number 8 in the UK charts. It was released in the US early in 1976 and was an instant hit in the States rising to number 2 in the US charts within weeks. “Right Back Where We Started From”, was recorded in London by Maxine Nightingale, a UK singer with no previous chart success. The song, a lively dance number, which features a distinctive baritone sax riff all the way through, stood out amongst other disco/dance records that were being released in the mid seventies. The song was co-written by a northeasterner named Vincent Edwards (otherwise known as J Vincent Edwards). “Right Back Where We Started From” was successfully revived by Sinitta in 1989 reaching number 4 in the UK singles chart. Over the years, the song has been featured in numerous movies and TV shows. Vincent had known Maxine Nightingale from when he and her were members of London cast of the “Hair” musical. Vincent persuaded a reluctant Maxine, who he’d previously used as a background singer, to record “Right Back Where We Started From”; a song he had co-written with Pierre Tubbs. Her decision to record the song was undoubtedly a turning point in both their lives.

So what do we know about Vincent Edwards? He started his musical career by playing in local South Shields bands. Some time ago Vincent contacted me and told me a bit about his life: –

“Hello great site. I used to be the singer in a South Shields band called the ‘Invictors’. The Kylastrons were the best band I had ever seen in 1962 at the Crown Ballroom, Ocean Road, South Shields. From that moment I knew I had to get my band, the Invictors into second gear. We turned pro in 1963 and went on to play in US bases in France.

“We then changed our name to ‘The Answers’; Tony Hill on guitar, Bob Calder on bass and myself singer and drums. We were considered the loudest band in London in 1966. We recorded two singles for Columbia records and introduced the Geordie language to London. Our first single, “Just a Fear” became a cult song for the top punk bands ten years later in the seventies.

Just a Fear – The Answers

“Thanks to the Cellar Club, the Majestic and La Strada, South Shields for letting us do our thing.”

Following the demise of the Answers, Vincent briefly fronted his own Soul band called “Vincent Edwards’ Present Tense” and six months later he joined the “Gates Of Eden” although no recordings were made with either act. In 1968, he landed the part of “Vince” in the hippie musical, “Hair” after auditioning for a part at the Shaftsbury Theatre in London. His first solo single “Hair” b/w “Aquarius” was released by United Artists in 1968 and the Original Cast Recording of the Hair soundtrack would reach number 2 in the UK charts, a career peak as a singer for Vincent. 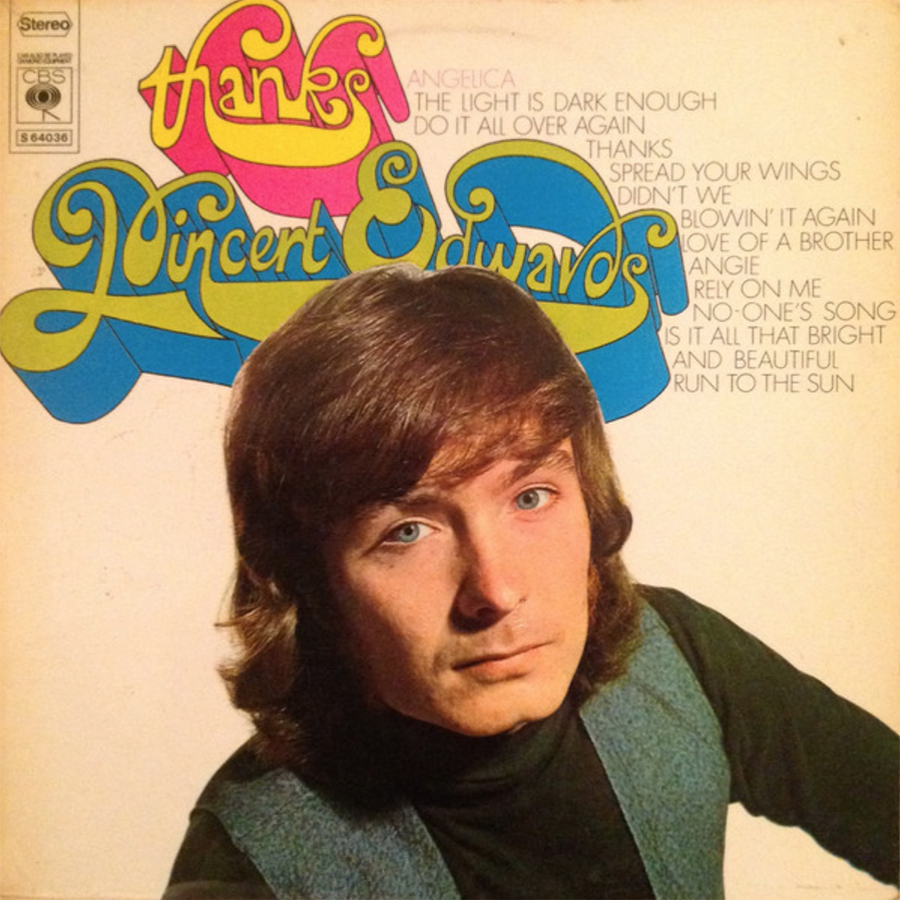 Since then, Vincent has had a long career as a singer, song writer and recording artist. His last chart success was in 1988 with the trio “Star Turn on 45 (Pints)” who recorded the spoof single “Pump Up The Bitter”, lampooning north east affiliated clubs.

J Vince Edwards has continued to record and perform in the UK and Europe. If nothing else, he should be remembered for his contribution as a song writer to one of the best dance records of the seventies.