I started playing saxophone at the age of fourteen while I was still at school. When I first took up the instrument it wasn’t because I wanted to play in groups – that came a bit later when I started to get to know other musicians at school. A couple of noteworthy ex-pupils from my own school, Bede Grammar School for Boys, Sunderland who were there at the same time as me are Dave Stewart of the Eurythmics and Don Airey. Don has had a distinguished career as a keyboard player with Rainbow, the Ozzy Osbourne band and more recently, Deep Purple. An ex-pupil from my primary school who I knew at the time was Bob Marshall who went on to play for a top Sunderland Band in the early sixties – Chris Warren and the Strangers. Bob later joined the John Miles Set – remember ‘Music (is my first love)’? Chris Warren later joined Pickettywitch who had chart success with That Same Old Feeling.

The sax wasn’t the first instrument I learned. My first instrument was the violin and my first experience of playing with other musicians was in the school orchestra at Bede Grammar School. My first public appearance outside of the orchestra was at the age of fifteen at a school concert playing Dave Brubeck’s “Take Five”. The scratch band for the occasion was called the Guthrie Quartet after the drummer, Graham Guthrie. The others in the band were a Scots lad called Jimmy Wilson on upright bass, Don Airey on piano plus me on alto sax. 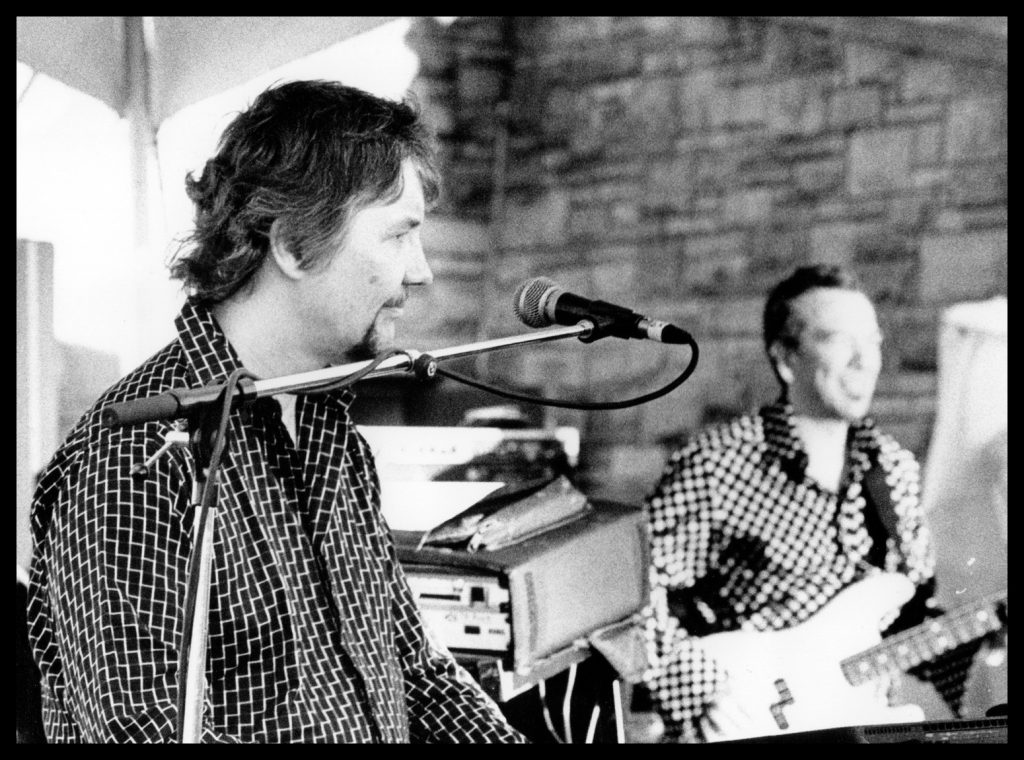 When I was learning to play music, the singles charts were dominated by American performers. A lot were solo singers such as Pat Boone, Bobby Darrin, Johnny Tillotson, Bobby Vee and of course, Elvis. There were also a few instrumentalists like Duane Eddy and Johnny & the Hurricanes. In the UK, the Shadows were the number one instrumental group and the musicians that most youngsters were trying to emulate. At this point in time a lot of local groups started springing up, at first covering the music of the Shadows and then expanding their repertoire to include current chart hits. The first band I ever saw live was Paul Ryan and the Streaks in South Hylton. They had a great sax player called Bernie. I was just learning to play at the time and listening to the Streaks made me realise that I had a long, long way to go.

While I was still at school, Graham Guthrie and I started up a group called the Katians named after a couple of girls he fancied at the time. By this time I had changed over to tenor sax. The Katians had a line up of two saxophones, organ, guitar, bass and drums. The group played instrumental covers of tunes by Johnny and the Hurricanes, the Rocking Rebels, Jet Harris and Duane Eddy. The Katians never really got any further than a couple of concerts at a church hall in South Hylton. During the this period, I was also playing second tenor sax in a fifteen piece dance band run by some students at the local teachers training college. 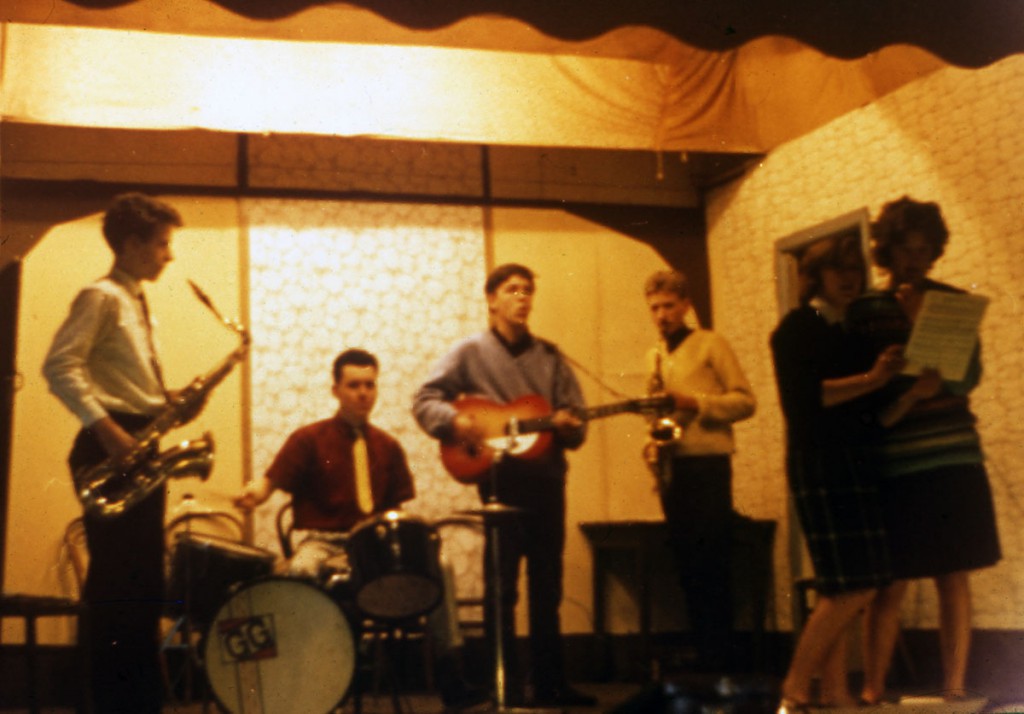 By this time the Beatles were starting to establish themselves as a household name. The ‘Liverpool Sound’ was born and dozens of other Merseyside performers achieved chart success following in the Beatles wake: Bands such as the Gerry and the Pacemakers, Billy J Kramer and the Dakotas, Cilla Black, Freddie and the Dreamers to name but a few. So why not a ‘North East Sound”? The Animals had charted with House of the Rising Sun and had proved that the Newcastle had a lot to offer. Could they start an avalanche of North East bands the same as the Beatles had done in the North West? In 1964 I went to the Sunderland Empire to see a show called the Geordie Sound featuring a number of North East bands; Kim & the Kinetics, the VIPs, The Delemares and Paul Ryan & the Streaks (mentioned above). In addition the show featured the up and coming Joe Cocker. Unfortunately the show was a bit of a flop outside of the North East and failed to establish Newcastle as the “new” Liverpool. 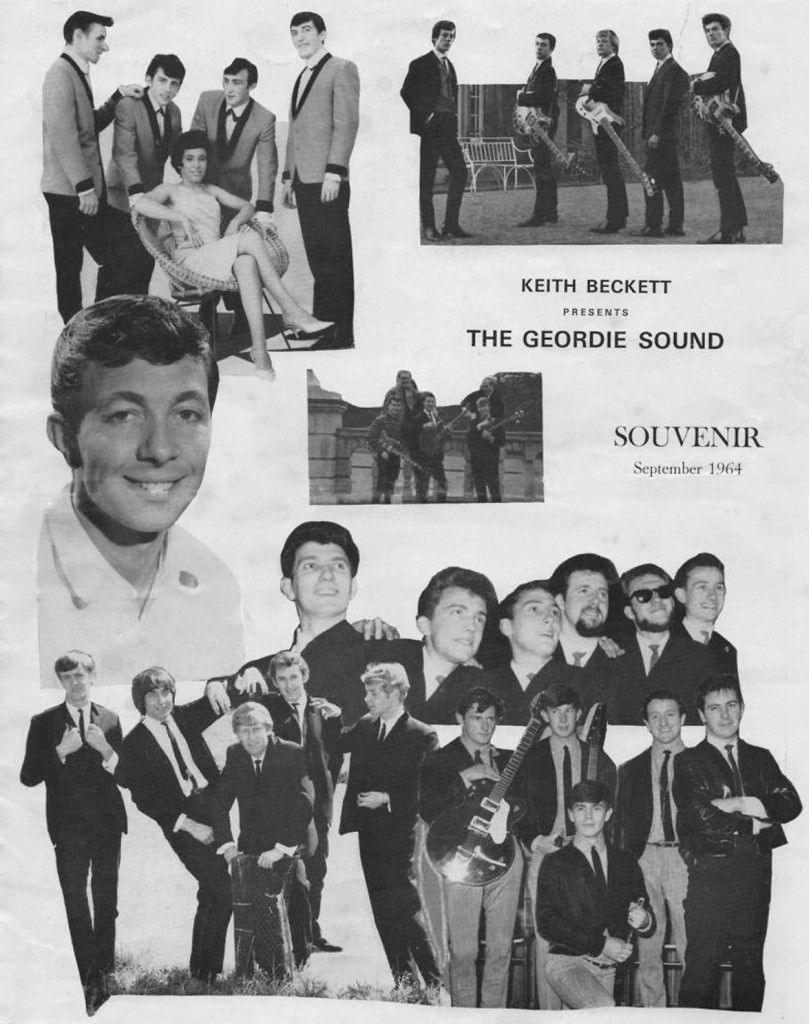 Graham Guthrie and I played together in a couple more bands before moving on to the Conrads with a lead guitarist, bass player and vocalist/rhythm guitarist who all lived quite near to me. We played a lot of the current chart material – Beatles, Kinks, Dave Clark Five and the like.

Apart from the odd wedding reception and party, our only regular gig was at a youth club dance at St Barnabus church hall in Sunderland where we always shared the stage with another young band called the Fireflies. The drummer in the Fireflies was Nigel Olsson who I would later play with in the Jazzboard and James South. The Fireflies guitarist was Mick Grabham who was a member of Plastic Penny with Nigel and later went on to play with Cochise and Procol Harum. 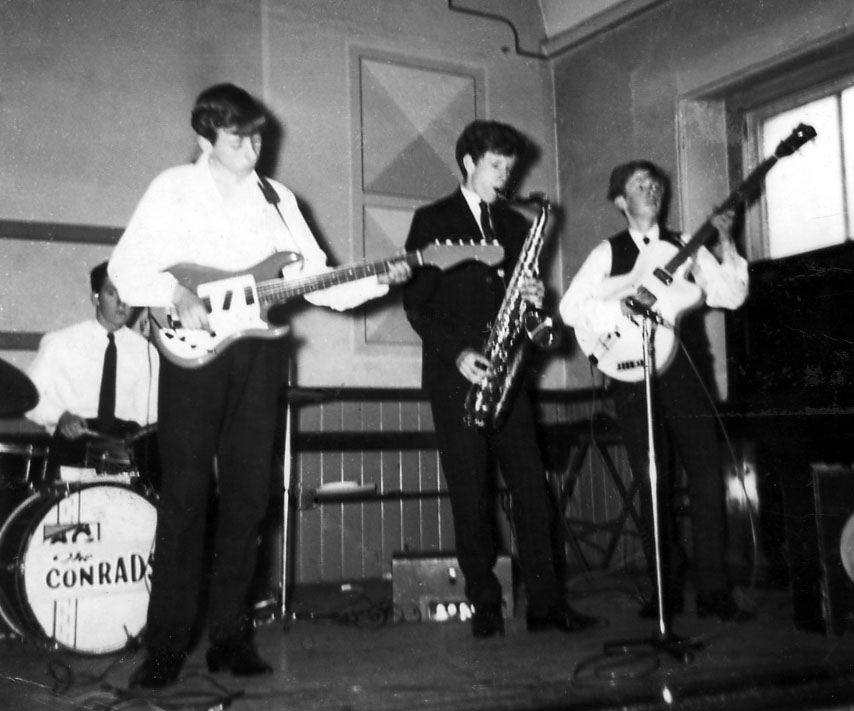 The Conrads performing at a wedding reception in 1964

The Conrads didn’t last that long. David Snowdon, the lead guitarist joined a gigging band and started to play working men’s clubs on a regular basis. He later went on to play with the Up North Combine. Peter Watson, the bass player, joined a band called the Quandowns and eventually went to Hamburg as a professional musician. In later years I would play again with both David and Peter in separate bands. 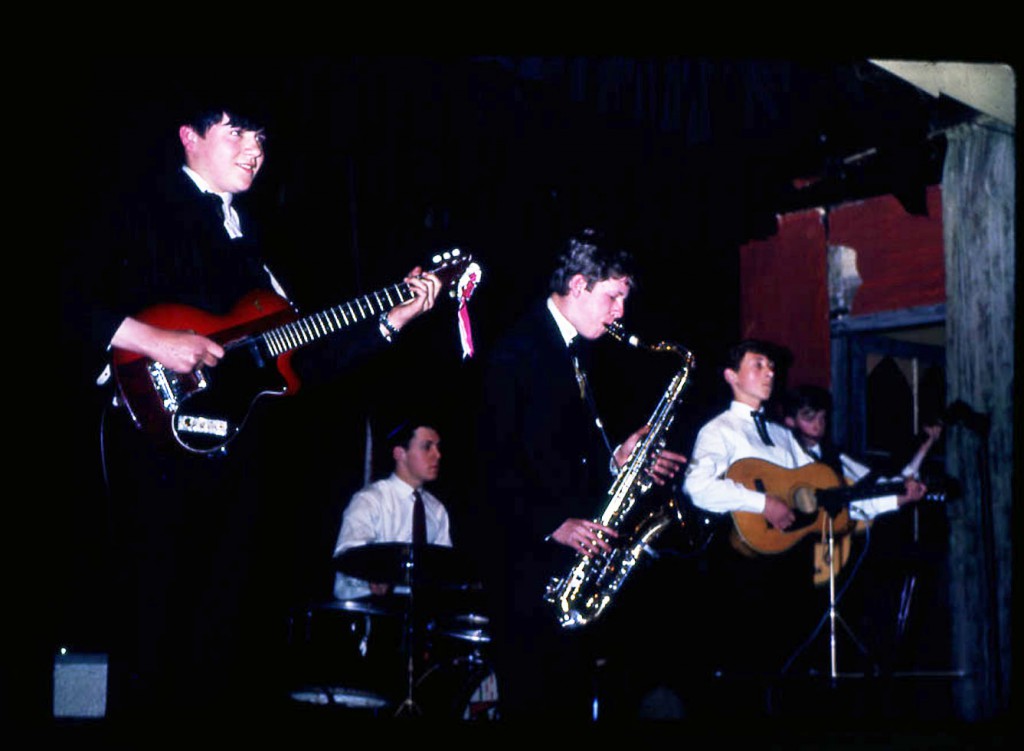 The Conrads at St Barnabus Church Hall in Hendon, Sunderland in 1964 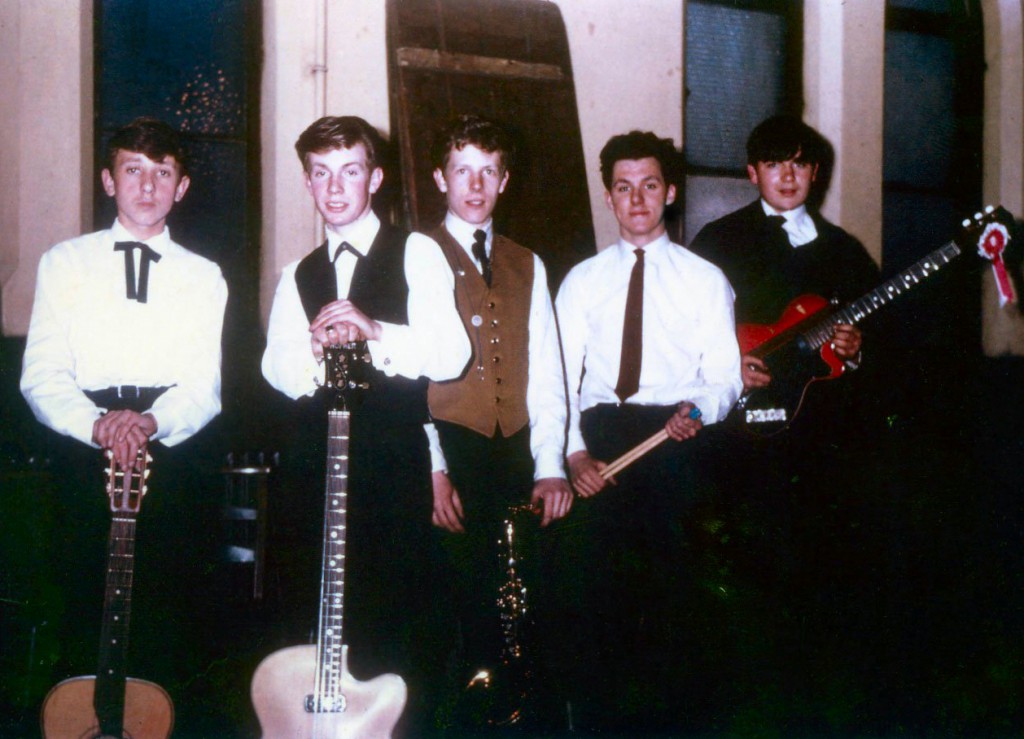 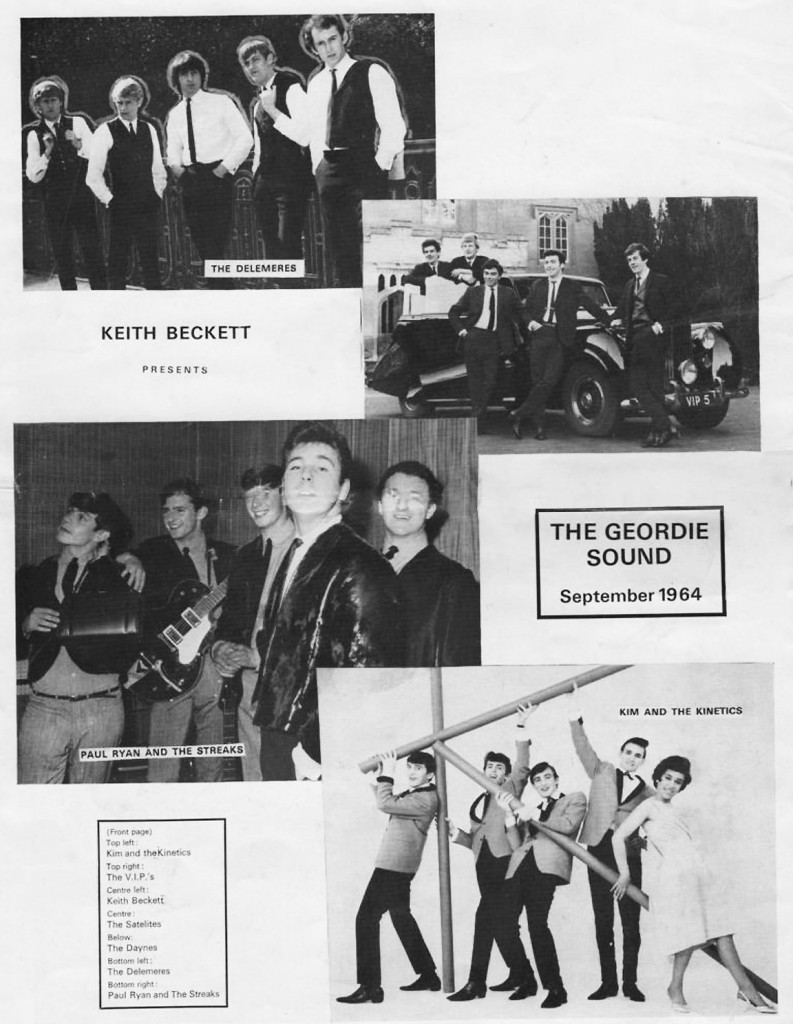 My first real band was the Kylastrons. I joined them at the beginning of 1965 and was with them until May 1965. I was quite a bit younger and a lot less experienced than the other band members and definitely out of my depth playing with a band that had been one of the top Newcastle outfits a few years earlier. My few months with the Kylastron made me realise that I had a lot to learn if I was going to play alongside seasoned musicians. After splitting with the Kylastrons, I was introduced to the world of affiliated working men’s clubs. Most villages and districts in the North East had at least one Working Men’s Club and most of them provided entertainment including local bands (or beat groups as they were called back in 1965). Bands were booked by the club’s concert secretary who would address you as ‘bonny lad’ and refer to your band as ‘the torn’ (turn in English). It was the concert secretary’s job to regularly tell you to turn down the volume. He had the power to pay off the band or give you more bookings depending on how you went down. Audiences were mainly seated but in some clubs towards the end of the night people would get up to dance. The upside of playing at these clubs was that the beer was incredibly cheap and it didn’t cost much to get rat arsed and look as if you were enjoying being there. A pint of Federation beer could cost as little as eleven pence (less than 5p in new money). As a comparison, a pint bottle of Newcastle brown ale at that time cost around two shillings and six pence (twelve and a half pence in new money).

When my friend David Snowdon found out that I was no longer with the Kylastrons he asked me if I was interested in auditioning with his band, which played mainly in Working Men’s clubs in County Durham. They were a female fronted five piece outfit playing a mixture of standard pop songs and current chart hits. The other band members liked the sax and I was asked to become the sixth member of the band that was renamed ‘The Six Leaves’. The line-up before I joined was vocals, lead and rhythm guitars, bass and drums. The sax added a new dimension to their covers of early Tamla Motown songs such as “Baby Love” (the Supremes) and pop songs like “My Boy Lollipop” (Millie). After a while a couple of sax instrumentals were slotted into the repertoire. These were rock versions of the “William Tell Overture” and Glenn Miller’s “In the Mood” and were real crowd pleasers. 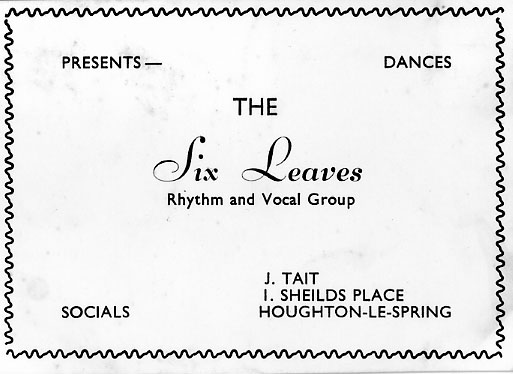 The male members of the band wore matching green waist coats with a leaf pattern while Sylvia, the vocalist, used to wear something low cut and clingy. She was in the habit of roaming around the audience while she was singing and plonking herself on some punter’s knee, risking the odd grope. But she could look after herself and when she let fly with her left palm she always kept on singing! 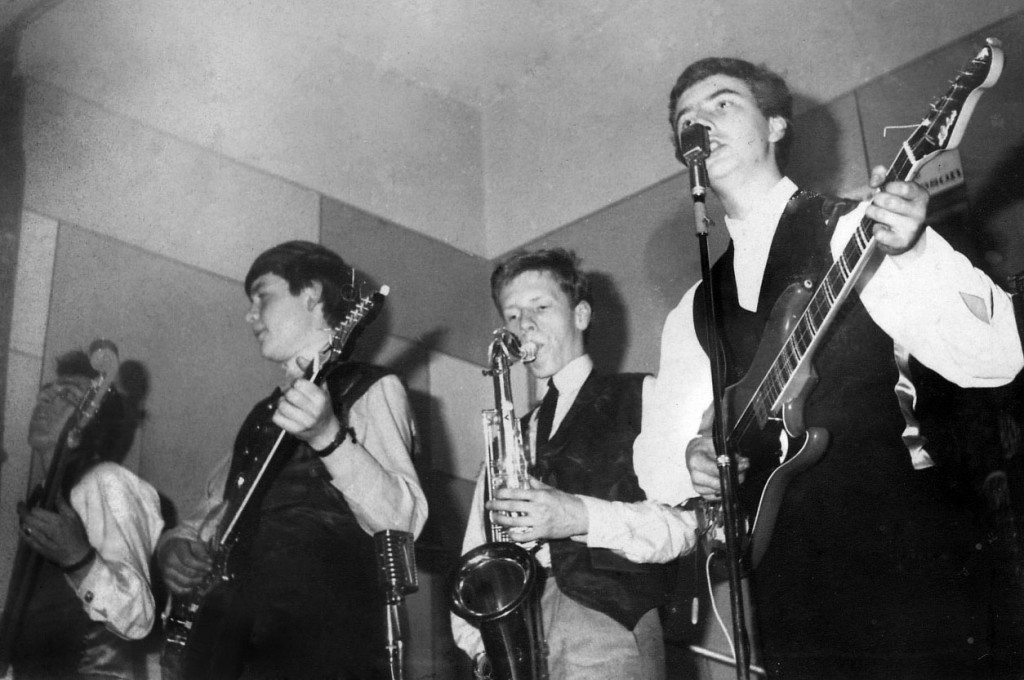 The Six Leaves had a fairly busy schedule in working men’s clubs in the Sunderland and Durham areas. Some that come to mind are; The Queens in West Hartlepool, Horden Labour Club, Houghton Glendale, Silksworth Buffs and York House in Seaham.

Apart from Sylvia Tait and her bassist husband Jeff, the other members were fairly inexperienced musicians. It wasn’t long before petty rivalries emerged and the band started falling apart. The first to go was Paul, the lead guitarist and backing singer. His harmonies were sorely missed and, although he was replaced by a better guitarist called Don Sweetman, the overall sound of the band was never quite as good. 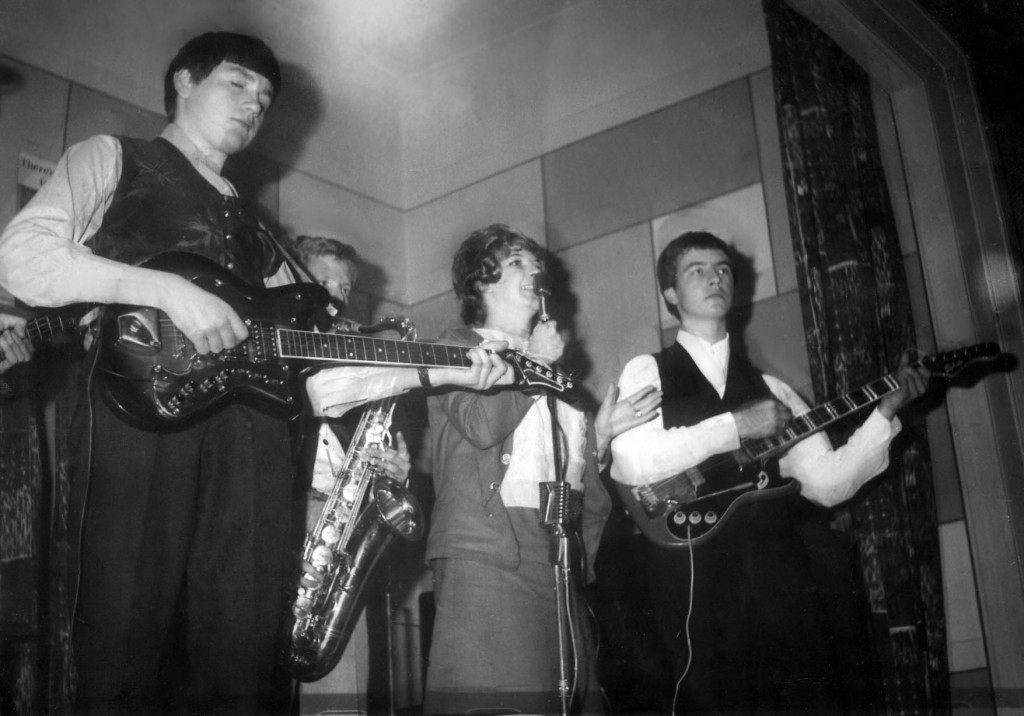 The Six Leaves – with Sylvia Tait on vocals (left)

At this time saxophones were gaining popularity and I was getting offers of work from Newcastle and Gateshead bands. When one of the top Sunderland bands, Jazzboard, contacted me and asked if I was interested in joining, I decided to call it a day with the Six Leaves. My last gig with them was on Saturday 25th September 1965 at the Glendale Club in Houghton-le-Spring. I received the princely sum of one pound, seven shillings and sixpence. 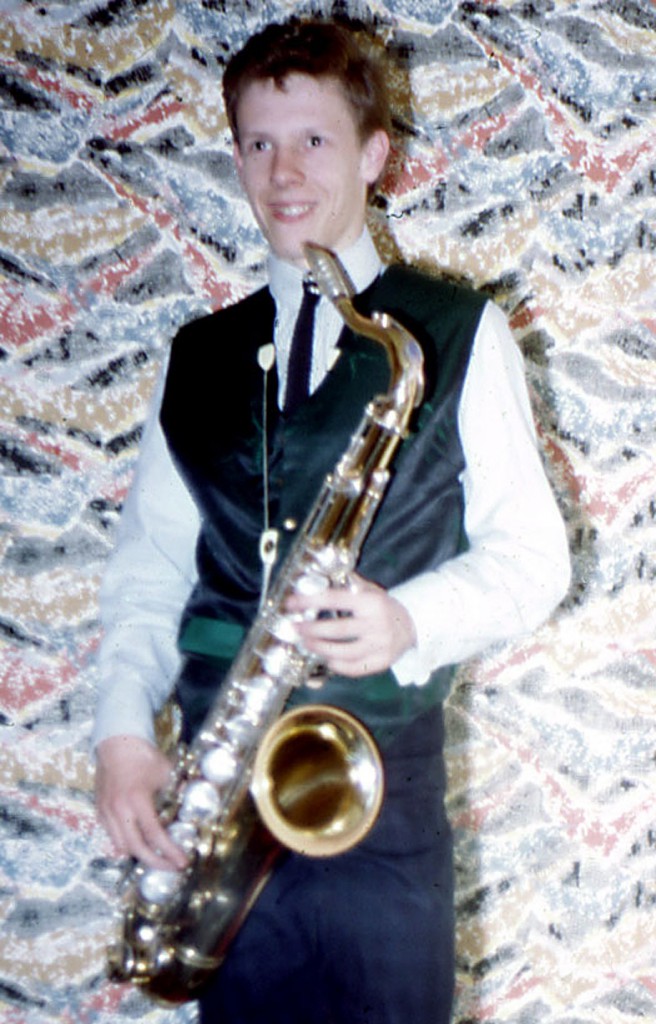