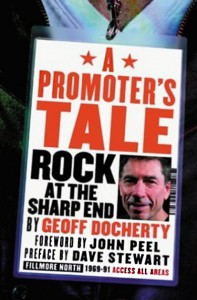 There’s lots of sex, drugs and rock ‘n roll in the autobiography of Geoff Docherty about his life as a promoter in the late sixties and seventies. And quite a bit of violence chucked in too.

When I visited the North East Beat exhibition last month (see ‘North East Beat’ blog), I saw ‘A Promoter’s Tale’ on sale at the Discovery Museum shop. I knew about the book when it was first published in 2002 but I didn’t buy it at the time.

I was playing in Newcastle bands at the same time that Geoff was around and we knew the same people – Nigel Olsson and Mick Grabham, for instance. But our paths apparently never crossed back then and although I played at the Bay Hotel, one of Geoff’s early venues, I can’t remember ever meeting him.

Anyway, while I was up in the North East last month, my sister loaned me her copy of ‘A Promoter’s Tale’. Once I started reading, I couldn’t put it down and actually finished it in two sittings. It’s a fascinating account of Geoff Docherty’s achievements of bringing top bands to Sunderland and Newcastle at prices the average punter could afford. Geoff gives some graphic accounts of his encounters with some of the hard cases he had to deal with while he was establishing himself as a promoter. What did surprise me is that he is very modest about his skills in negotiating the appearance of bands like the Who, Free, Led Zeppelin and Country Joe at his venues.

The book itself is another great achievement by Geoff and I would thoroughly recommend it to anyone interested in the North East music scene of the sixties and seventies. I’m even going to buy my own copy after I return the one I read to my sister.

Read more about Geoff’s memories of some of the bands and north east venues he promoted in the late sixties and early seventies here.