For many Newcastle teenagers in the mid-sixties, the Club a’Gogo was their own piece of Heaven. The unlicensed part of the club, known as the Young Set was an exciting place to go to get away from the humdrum routines of daily life. It was a place where people could meet friends, make new ones, see some of the UK’s best bands, dance to excellent music and generally have a great evening in a club with an atmosphere second to none.

Perhaps the night wouldn’t end when the Young Set closed at around 11.00pm. For older teenagers or those who could convince the door staff they were over 18, they could continue partying into the small hours next door in the Jazz Lounge, the licensed room that catered for a slightly older clientele.

Many ex-Club a’Gogo members and attendees, now into their late sixties or seventies remember the club with great affection. Over the last decade or so advances in technology and the familiarisation with social media have reunited a lot of the Club a’Gogo crowd that were around in the mid-sixties, some of whom hadn’t seen each other for decades. They now have the means of reliving times gone by and sharing their memories of club nights and other social activities with their contemporaries. Not only do some remember their evenings inside the Club a’Gogo but also the anticipation and growing excitement before they actually set foot in the place. Some recall being in the queues that formed outside the club, in particular if a popular band was due to appear. Often on a busy night the queue would stretch back along Percy Street as far as the Co-op store near Gallowgate. Others remember the queue turning into Leazes Lane towards St James Park football ground. For those in the queue the excitement would build as they approached the club doorway past Jeavons record shop and Faglemans the jewellers. But the anticipation didn’t end at the ground floor entrance to the club. 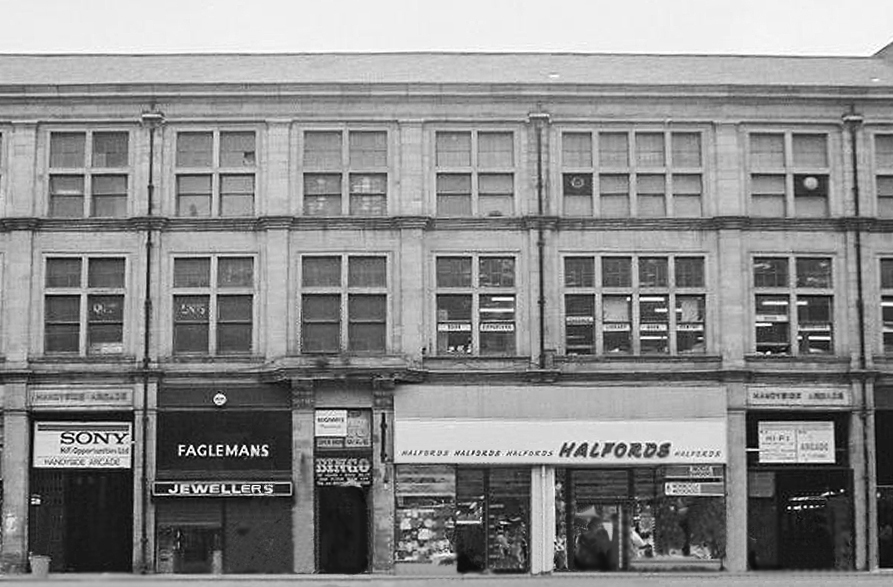 The Club a’Gogo doorway wasn’t an elaborate fixture worthy of a top city music venue. Neither was the stairway leading up to the Young Set and Jazz Lounge on the second floor. The corridor leading to the stairs and the flights of stairs were uncarpeted. They were purely functional with a shared route to several businesses including a canteen for Newcastle bus crews on the first floor. But once past the door staff, the music filtering down from the second floor was a taste of what was to come. On ascending the stairs the sound of recorded Soul music, Tamla Motown or Rhythm & Blues music became more recognisable – the Four Tops, Junior Walker, Wilson Pickett, Otis Redding, the Isley Brothers or the Rolling Stones. Then at the top of the stairs a short walk and a left turn into Heaven for an evening of unrivalled enjoyment.

Back in 1962 when Mike Jeffery opened his Newcastle venue, the Club a’Gogo, as a Jazz and Latin American club he would never have contemplated that a few years later his venture would become one of the country’s top clubs for rock and beat music; a club that is still revered over five decades later. Neither would he have thought that the Club a’Gogo would eventually be honoured by the City of Newcastle for generations to come.

For the last year husband and wife team, Paul and Jools Donnelly have put a lot of energy into campaigning for the Club a’Gogo to be commemorated with a blue plaque. The couple are too young to have been around when the Club a’Gogo was thriving but they are both passionate about Newcastle’s musical heritage, in particular the music and mod scene in the mid-sixties.

Armed with a lot of facts about the Club a’Gogo’s illustrious musical history and a petition signed by a lot of ex-Gogo club members, the Donnellys convinced the authorities that the Club a’Gogo was indeed worthy of blue plaque.

Mike Jeffery and his iconic club no longer exist. Mike was killed in a plane crash in 1973. The building that housed the Club a’Gogo was demolished in 1987 to make way for the Eldon Gardens Shopping Centre.

Well it’s not possible to place a plaque on a building that is no longer there. The only option would be to mount it at a spot relevant to the old Club a’Gogo. As the club was actually on the second floor of the Handyside Buildings, the best street level spot would be the site of the afore mentioned doorway leading to the flights of stairs that accessed the upper floors. The problem is that all the adjoining buildings are gone so there are no longer any visible points of reference to help locate the position of the long lost portal to the Club a’Gogo. 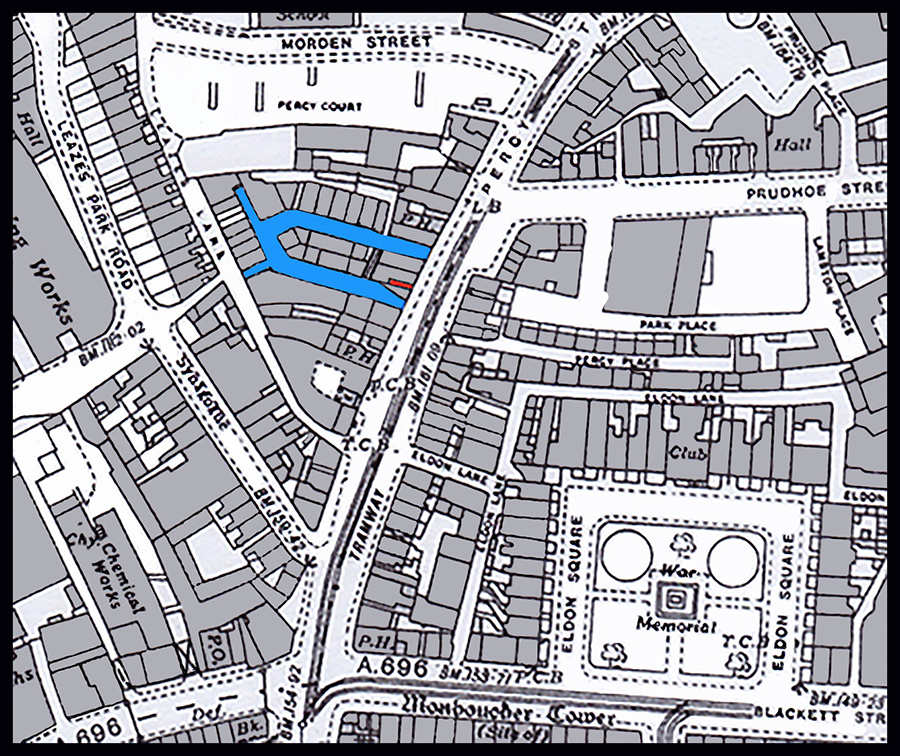 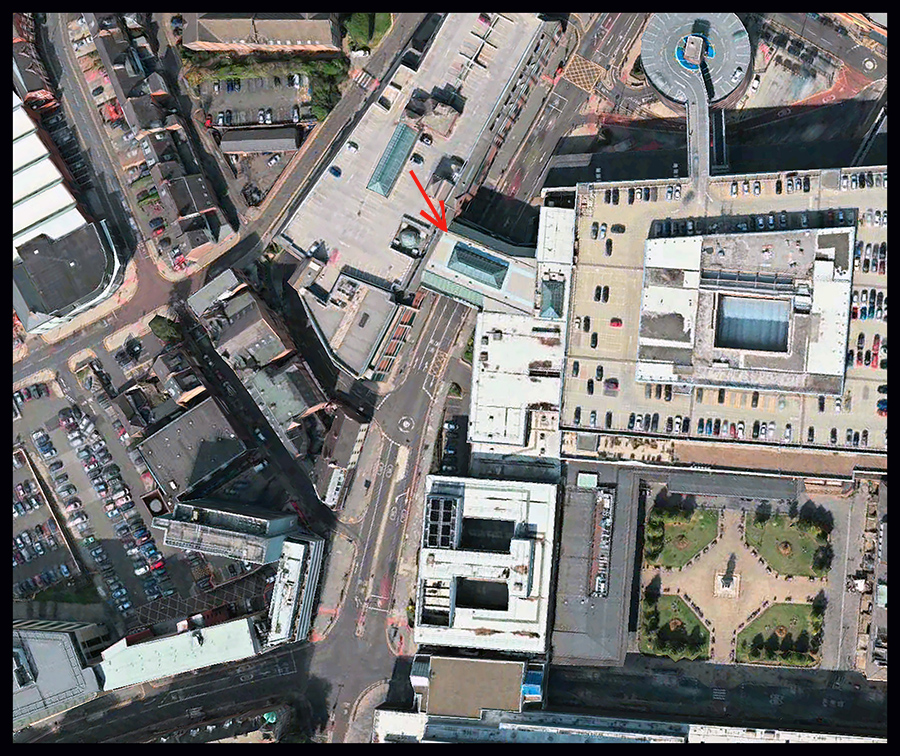 A few weeks ago I was asked if I knew the position of the Club a’Gogo doorway. I could only stab a guess based on old photos of the Handyside Building in relation to some photos I had taken of the Eldon Gardens Shopping Centre back in 2007 for the Club a’Gogo page on this site. However, with a combination of old and new technology it is possible to come up with a fairly accurate grid reference. By overlaying a 1940s Ordnance Survey map, which shows both the Handyside Arcade and what was to become the entrance to the Club a’Gogo, over an up-to-date aerial shot of Percy Street the old Gogo doorway in relation to it’s modern surroundings can be pinpointed.

I believe the unveiling of the plaque will take place early in 2022. So if you’re an old Club a’Gogo member or attendee and you’re interested in being a part of the ceremony keep an eye on the local Newcastle media or one of the Club a’Gogo Facebook pages.