This year is the 50th anniversary of the ‘Summer of Love’. The ‘Hippy’ phenomenon had been around in the USA and Europe since the mid sixties but 1967 was the year that the media focused on this particular underground youth counter-culture along with ‘Flower Power’, the anti-war movement.

The origins of the Summer of Love actually began in the winter on 14th January 1967 in San Francisco’s Golden Gate Park at an event called the Human Be-In. The Human Be-In culminated in a speech from famed LSD guru, Timothy Leary who encouraged everyone to; “Turn on, tune in, drop out.” Leary’s advocacy increased the demand for LSD, the powerful mind-altering psychedelic drug, which had only just become illegal in the USA and some parts of Europe.

Some regular visitors to this site will remember the long hot Summer of Love. Yes, it really was hot and sunny for a long time in some parts of the UK during the summer of 1967. Meanwhile, in the States the media was having a field day. They had a lot of ammunition to amuse and infuriate the normal US working Joe (and Josephine); guys with long(ish) hair wearing flowery Kaftans, beads and flowers; the widespread use of drugs, including LSD; free love; public nudity and draft dodging. Some of these straight ‘Joes’ made a living organizing bus trips to the Haight Ashbury area of San Francisco so that people could observe the freaks at close quarters. 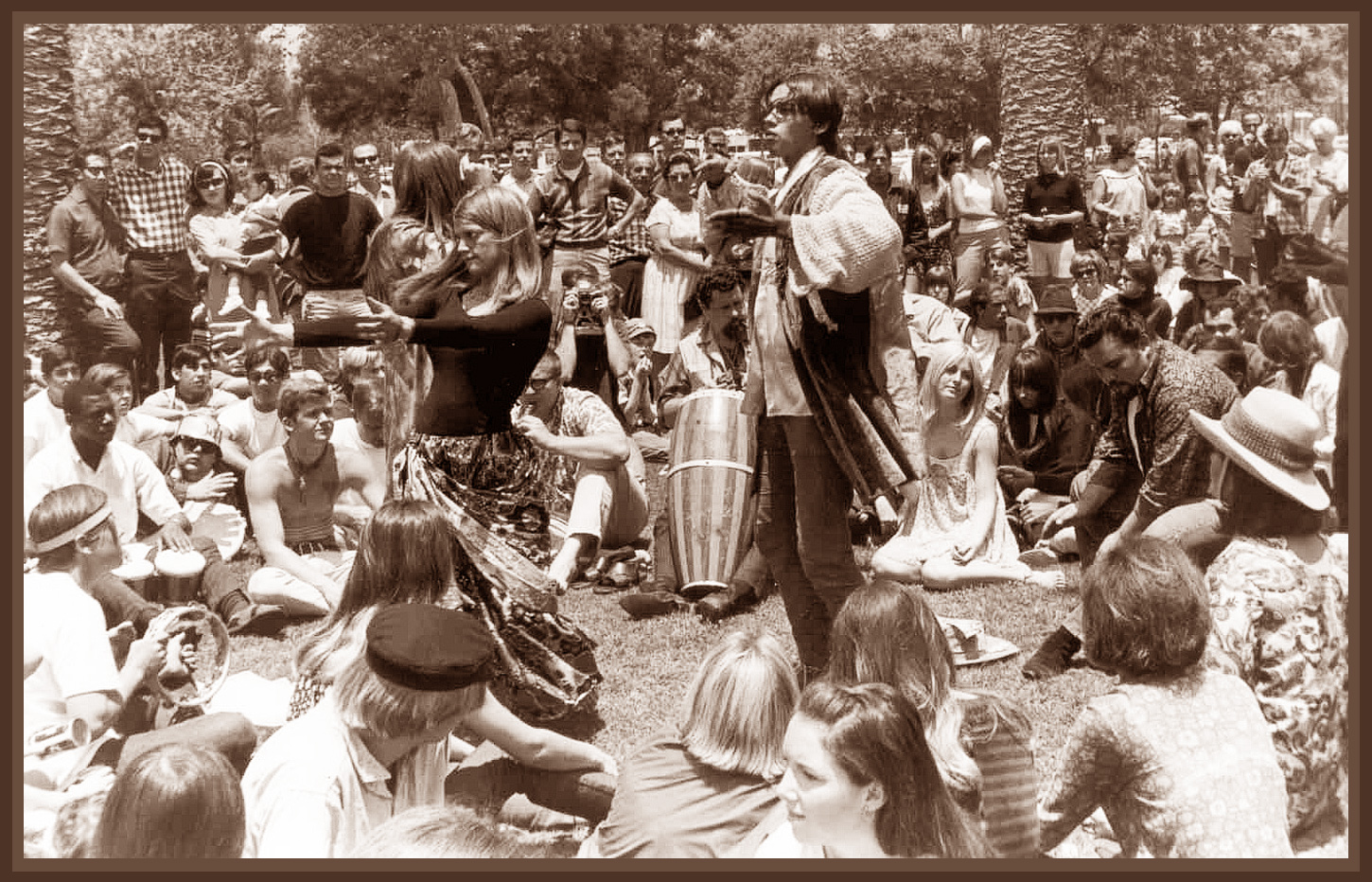 At this point I should say that although my last blog was about the 50th anniversary of 1966, I hadn’t intended to write anything about 1967. However, a few days ago I watched a 1967 film about a Love-In that took place in the Handyside Arcade (Arcadia), below Newcastle’s legendary Club A’Gogo and this brought back a lot of memories for me.

The film is well worth watching from start to finish (about five minutes). You’ll see ‘weekend’ hippies wearing kaftans, flowers, sandals and bandannas. Typically, the Tyne Tees commentator is scornful about the concept of a ‘Love-In’ and tries his best to belittle the people he interviews. 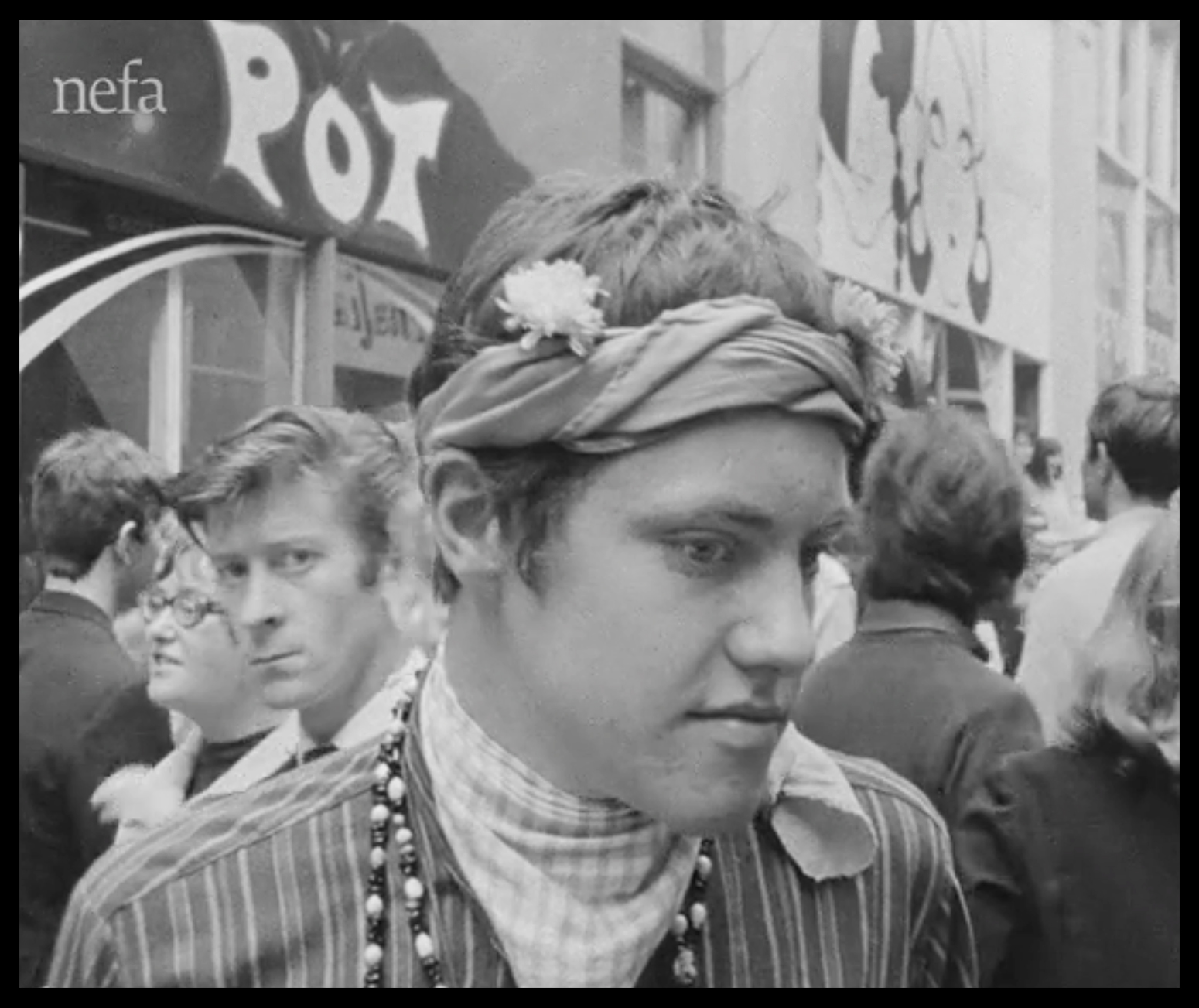 You can watch the film via this link to the North East Film Archive.

To me, the most interesting bits of the film feature footage of the north-east band, Gas Board and a brief interview with their bass player, the late Graham Simpson, co-founder of Roxy Music with Bryan Ferry. Unfortunately, there are no sound clips of the Gas Board performing. The presenter refers to the band as New Religion (another Newcastle group) who can actually be heard performing “In The Midnight Hour” in the background. However, the film has been edited to show footage of the Gas Board and not New Religion.

Bryan Ferry was a member of Gas Board from around 1965 when it was a seven-piece band but he had left by 1967 when the ‘Love-In’ was filmed. In the film, the Gas Board is a five-piece, which includes Graham Simpson and Mike Figgis (now a film producer). 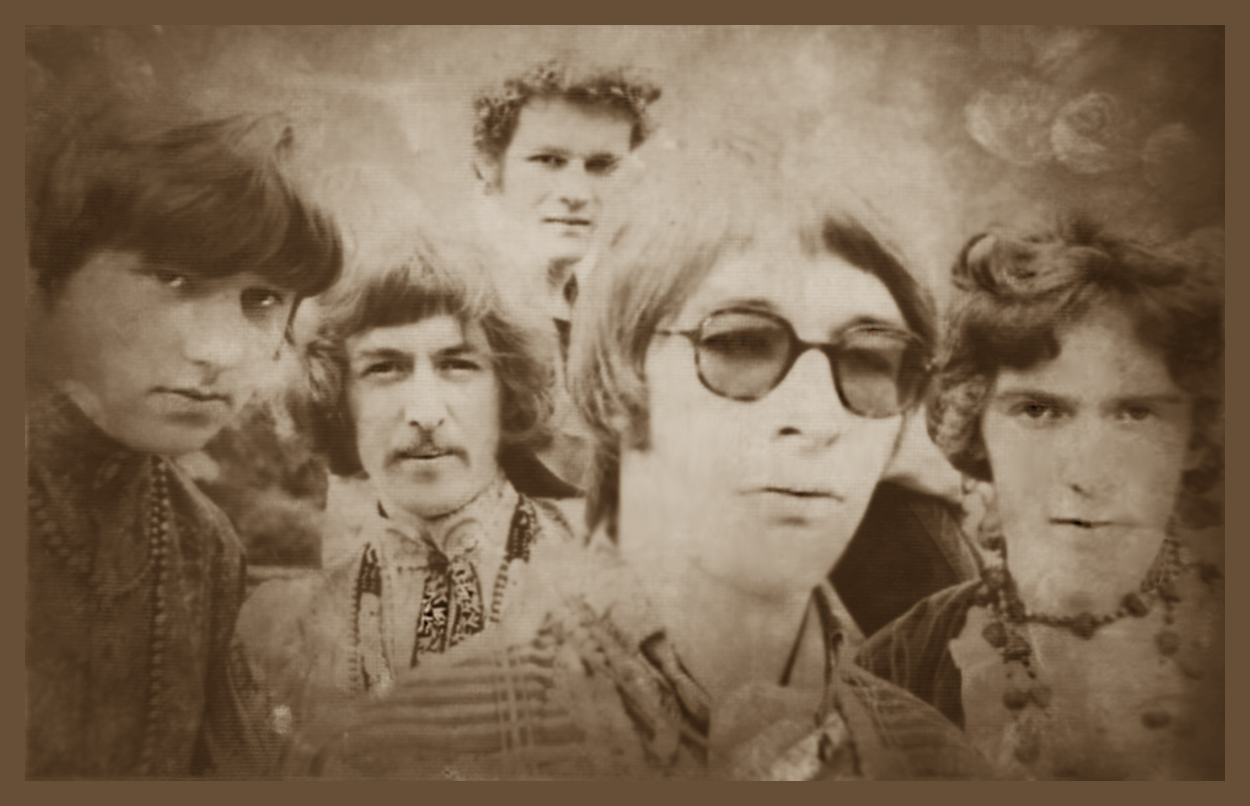 The Gas Board (post Bryan Ferry) in 1967 – the same line-up that can be seen in the Love-In film. 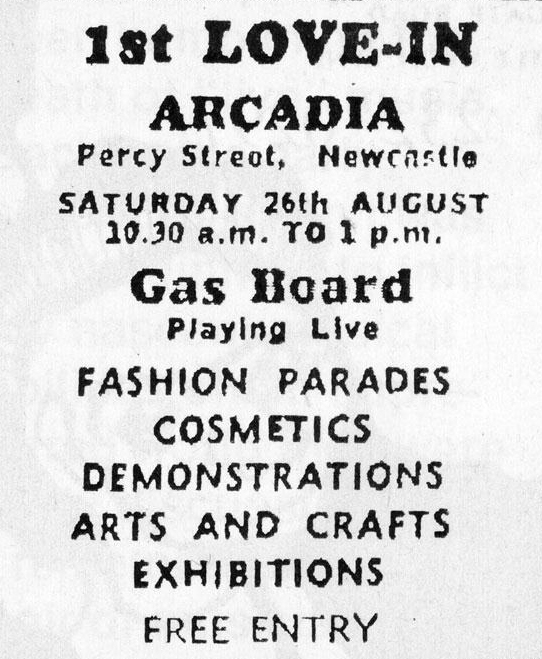 A few months after the Handyside Arcade Love-In, there was another Love-In at the Haymarket area of Newcastle. This time it was an evening event on some waste ground, part of the university rag week. This Love-In featured a couple of bands – the Gobi Desert Kanoo Club, which included Brian Johnson before he became the world famous rock God with AC-DC. Also performing that night was my own band – the James South Organisation. I don’t recall much about the gig. One thing I remember vividly happened the next day when I bumped into a girl I knew who I’d seen at the Haymarket gig. I said to her – “It wasn’t much of a Love-In, was it?” She winked at me and replied “Oh I don’t know. I didn’t do too bad”. So Bridget Murphy, if you ever get to read this blog, we all know what you were up to on the evening of 23rd October 1967.

For me, 1967 came and went in a bit of haze. Unfortunately, I don’t have many photographs from that year to remind me of my bands, the gigs I played, the people I knew and the clothes we all wore. One of the outfits I do remember wearing at some of Jazzboards gigs in the summer was a blue paisley kaftan and a pair of shoes, which I’d painted to match the paisley pattern on the kaftan.

Here’s a couple of photos I’ve kept from 1967, the Summer of Love: The first is of Jazzboard at the Cellar Club, South Shields taken a few months after Jimi Hendrix had rammed his guitar into the the ceiling above the stage. The second is a collage I put together in 1967 that includes me and a couple of girls I knew back then – Julie and Ronnie. 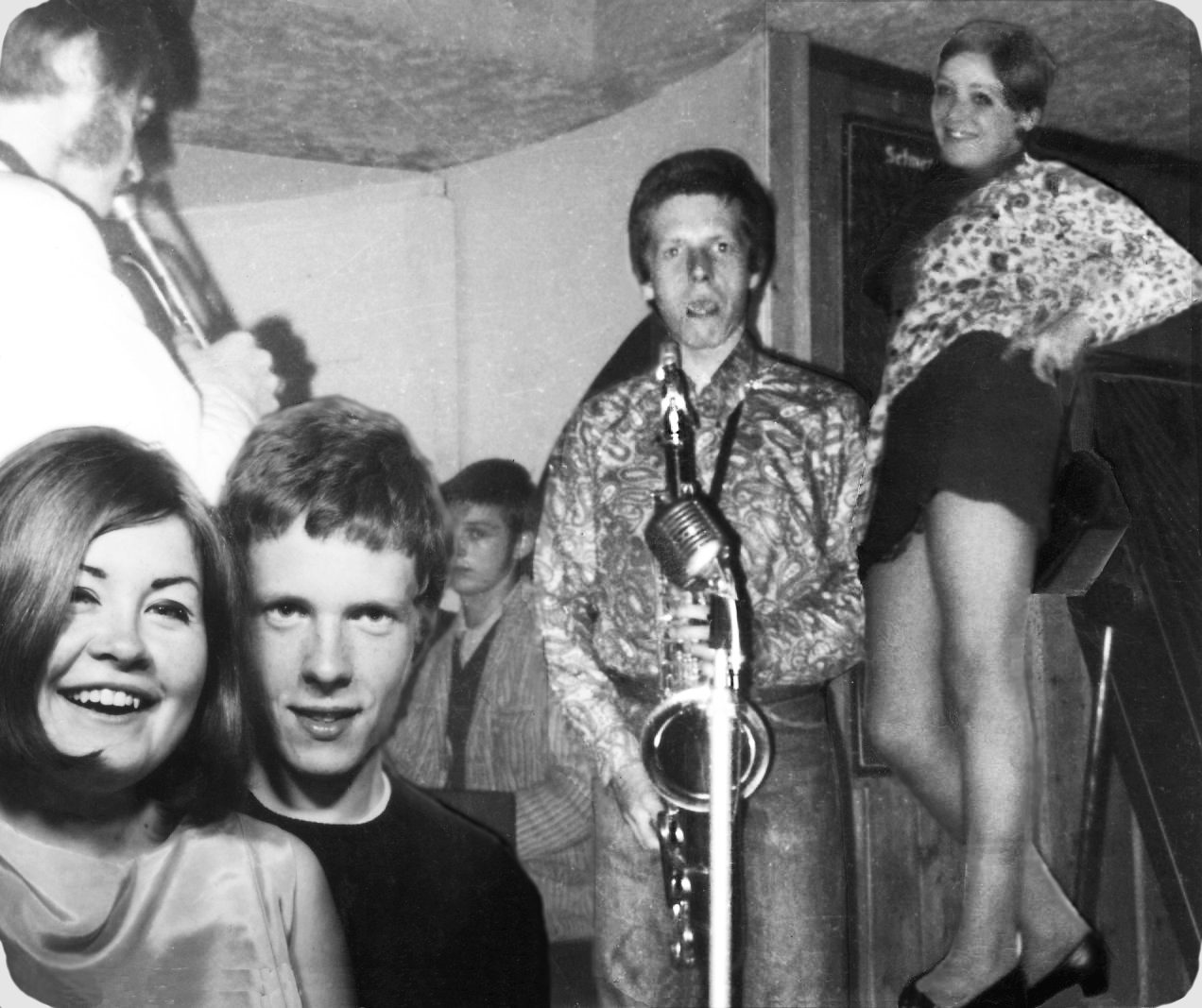 Although it was the year of ‘Peace and Love’, at some venues it was still the usual violence and hate. One of the worst gigs I did with Jazzboard in 1967 was at a hall in Red Row, Northumberland. The place had a terrible reputation as far as bands were concerned. A gang of hard cases took great pleasure in roughing up the visiting bands every week at the Saturday night hop. So much so that it was rare for any band to play there more than once.

When Jazzboard arrived at the venue we noticed a big banner on the wall, which read “Psychedelic Freak-Outs Every Saturday Night”. We thought perhaps the hippy culture had eventually reached Red Row and the local heavies would be tripping out on acid and dancing to projected oil slides instead of beating up musicians. We were totally wrong of course. Although the knuckle draggers wore ‘Peace and Love’ T-shirts, they were still intent on half killing anyone who didn’t live in Red Row, including the bands. In actual fact, we got away quite lightly. Jazzboard had quite a big following in nearby town of Ashington. A lot of the girls from Hirst Welfare and the Lampglass Cellar Club, Ashington had travelled to Red Row to see the band. Throughout the evening they formed a barrier across the front of the stage so the resident hard cases couldn’t get to us. I think the Ashington girls were a lot harder than the Red Row blokes. So even in Red Row there was a little bit of ‘Peace and Love’, albeit enforced.

I guess the Summer of Love fizzled out in the north east when the winter set in and the weather got a bit colder. In San Fransisco there was a bit more formality to its demise. A mock funeral, “The Death of the Hippie,” was held on 6th October 1967. This marked the end of the movement and encouraged the hippies to spread the word elsewhere. The Flower Children took their message across the USA and as far away as New Zealand and Japan. 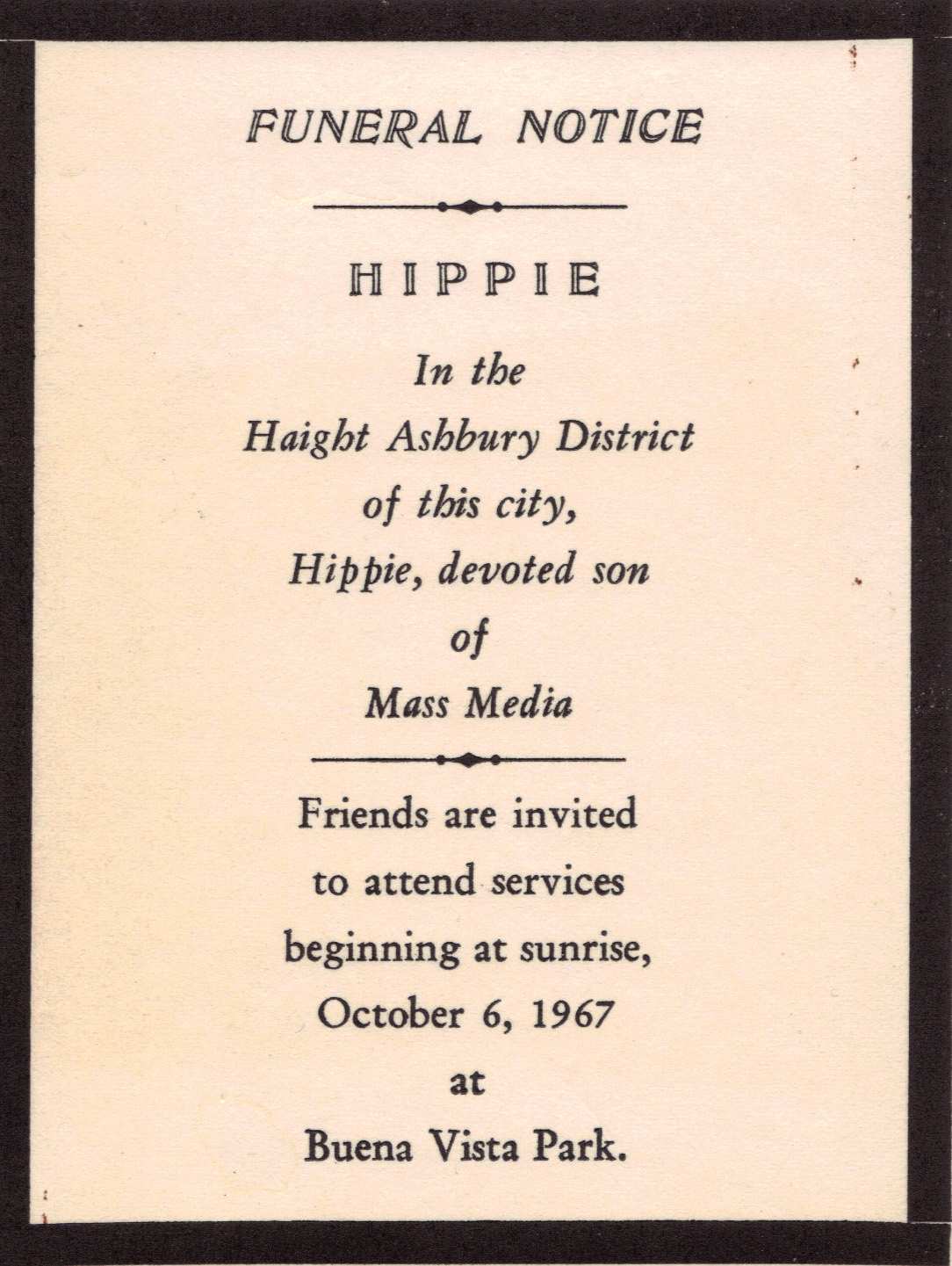 The Summer of Love was over.