I first came across the Invaders in the early months of 1965. I’d recently joined my first established Newcastle band, the Kylastrons. One of the places we regularly played was the Bluenote club in Sunderland. On two occasions, 12th March and 19th March, the Kylastrons played at the club on the same night as the Invaders.

I parted company the Kylastrons after a few months and although I subsequently played in the northeast with a handful of different bands from 1965 through to 1972, I never crossed paths with the Invaders again.

Fast-forward four decades to the 2000’s when Ready Steady Gone was in an embryonic stage. I’d just added a basic page to the site about Newcastle’s legendary sixties night-spot – the Club a’Gogo. Out of the blue I was contacted by Dougie Vickers who told me that he had been the drummer in the Club a’Gogo’s resident band in the early sixties. His band had been the Invaders. This came as a bit of a surprise to me because at that stage my research had indicated that the only resident bands at the Gogo had been The Animals in 1963, followed by the Juncos Partners in 1964. Dougie gave me a lot of information about the Invaders and the early days of the Club a’Gogo and promised a lot more by way of photos, newspaper cuttings and posters. 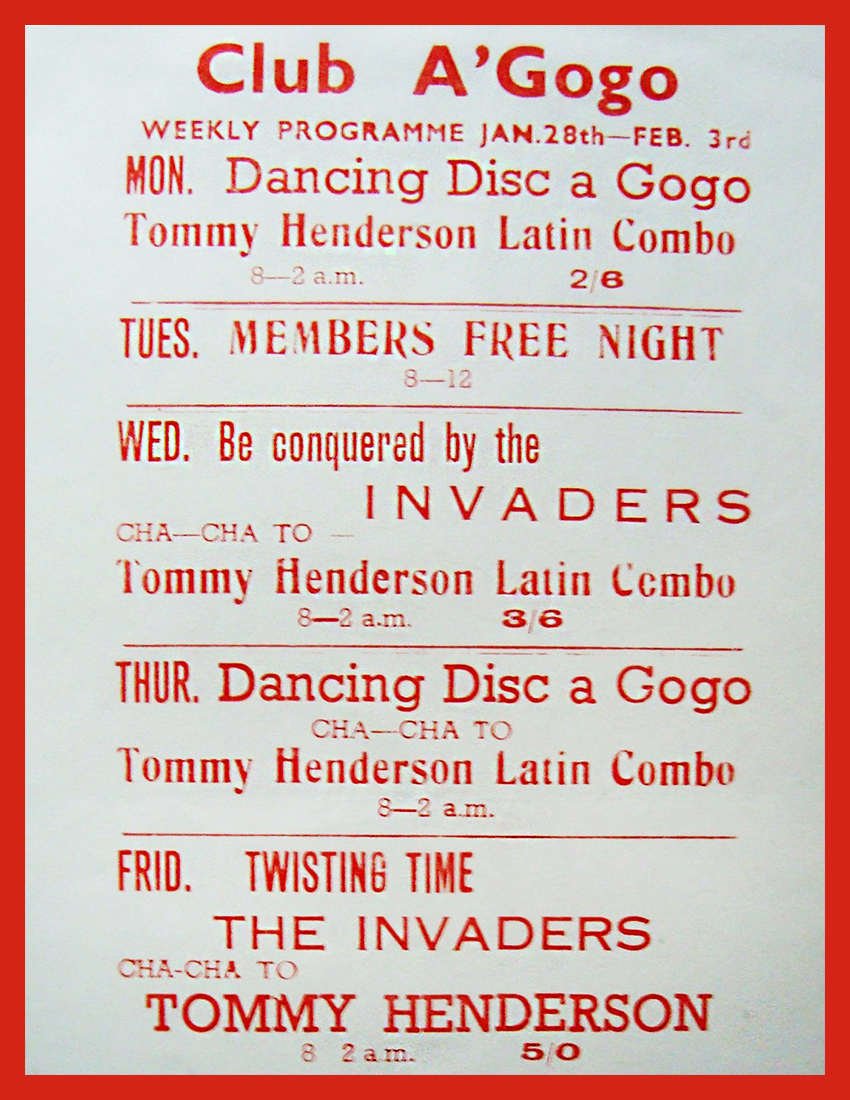 Thanks to Dougie’s detailed contributions the Club a’Gogo page on this site was off to a flying start.

When I did some further digging about the Invaders I found that between November 1962 and July 1966 the band played at the Club a’Gogo no fewer than a hundred and six times. This figure far exceeded the combined number of gigs played at the club by The Animals and the Juncos Partners.

Over the last five or so years interest in the Club a’Gogo as part of Newcastle’s cultural heritage has gained momentum and continues to do so. The club has featured in films, TV documentaries, books, magazine and newspaper articles. There are now Facebook pages dedicated to the Club a’Gogo and its original members. A recent campaign has resulted in firm plans to erect a blue plaque near the site of the original Club a’Gogo.

So why aren’t the Invaders widely recognized as being a resident band at the club? The answer is probably down to the timing of their residency and the kind of music the band played.

Some time later in 1964 the Junco Partners, another Newcastle Rhythm & Blues band took over the mantle of the Club a’Gogo’s resident band. The Junco Partners image and music suited the clientele of the Club a’Gogo and the band became very popular both in the Young Set and the Jazz Lounge. Such was the Juncos’ popularity that their name is indelibly linked to the club in the memories of those people who were Club a’Gogo regulars in the mid-sixties. Consequently the Juncos along with their predecessors, The Animals, have become an important part of the club’s history. 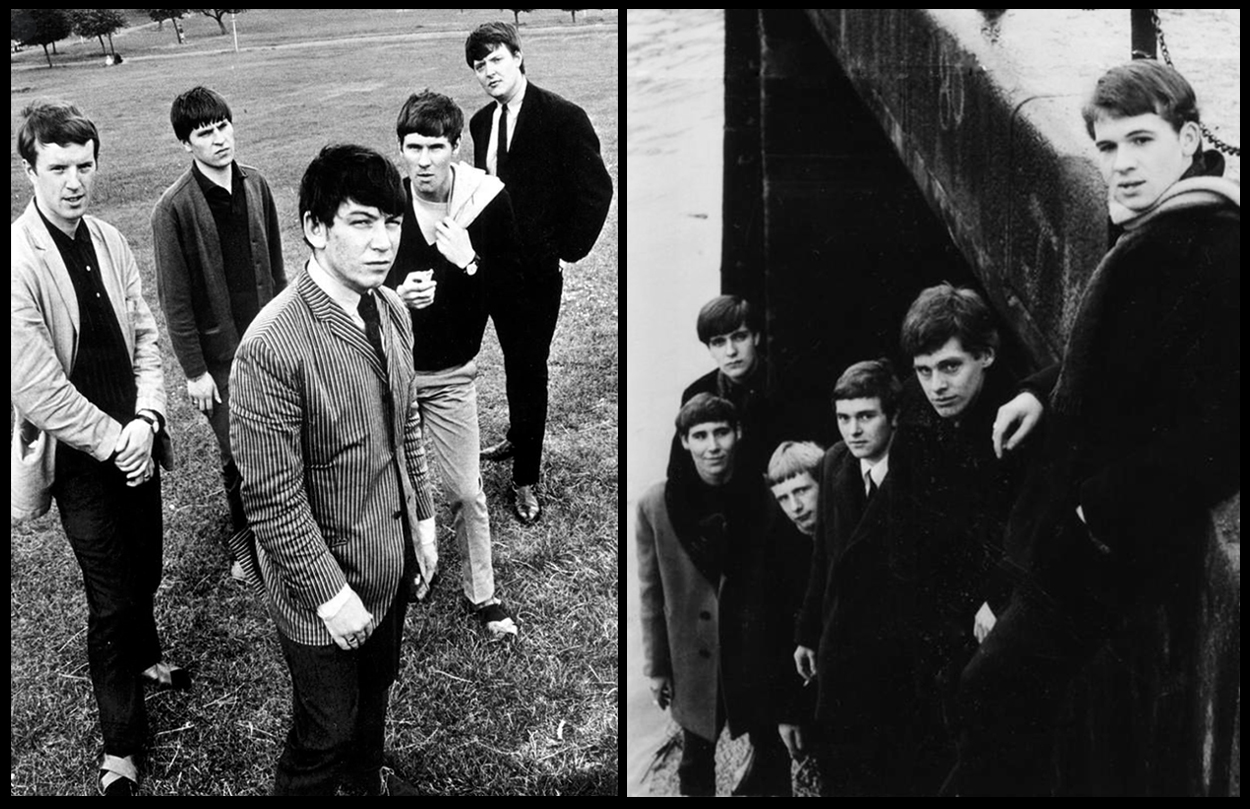 From 1964 more and more top Rhythm & Blue and rock bands were booked to play at the Club a’Gogo marking the start of the club’s four year “golden era”. It is this time that is mostly remembered by ex-club members rather than the earlier period, which featured jazz in the Jazz Lounge and pop music for teenage dancers in the Young Set. The Invaders were part of this earlier period and by-and-large have been left out of published accounts about the Club a’Gogo and its history. After the Junco Partners starting playing at the club, appearances by the Invaders tailed off. From 1964 the Invaders continued to play the occasional gig at the Club a’Gogo but no longer as a resident band.

The first Invaders consisted of a vocalist, Malcolm Forster on bass, Paul Sherman Earp on lead guitar and a drummer called Phil who was later replaced by Dougie Vickers. The line-up was completed by a talented keyboard player named Fenwick Trainer who in later years would leave the Invaders to join another successful northeast band called the Silver Dollars. 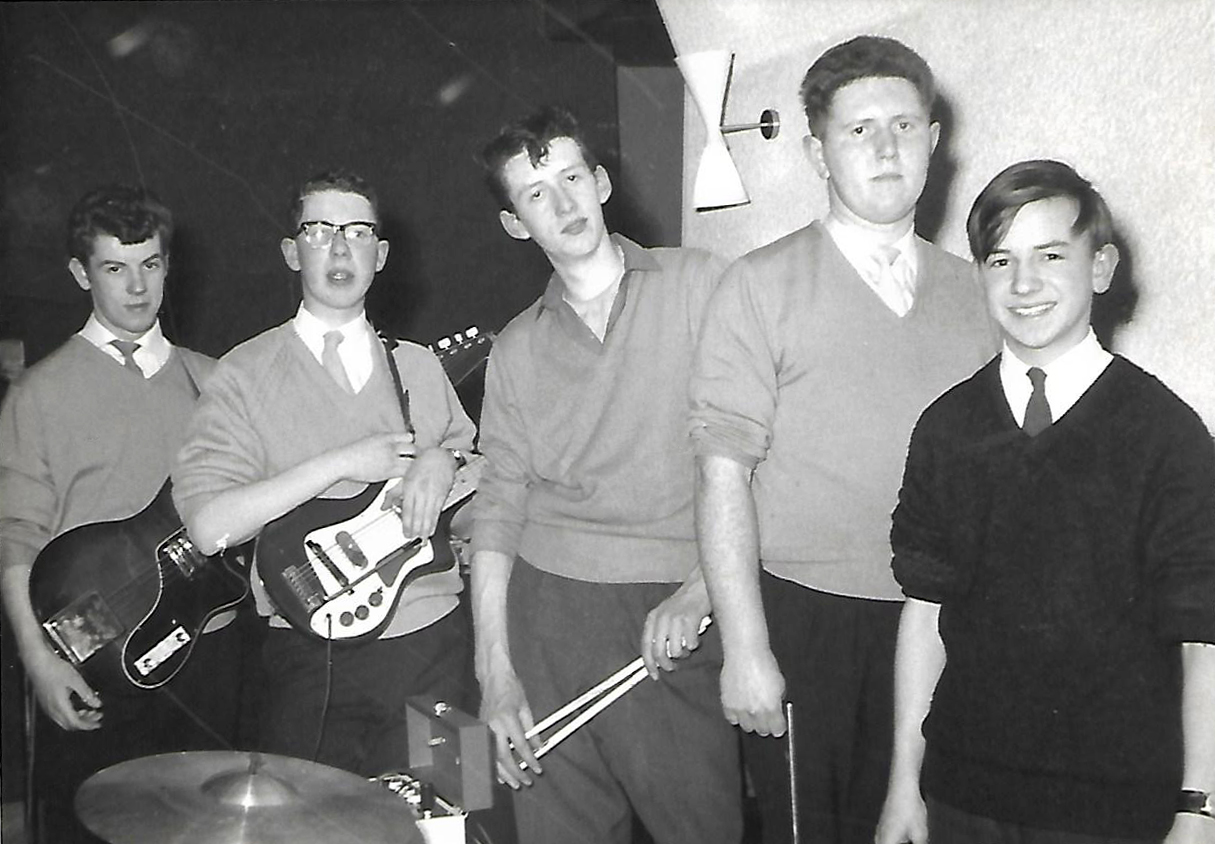 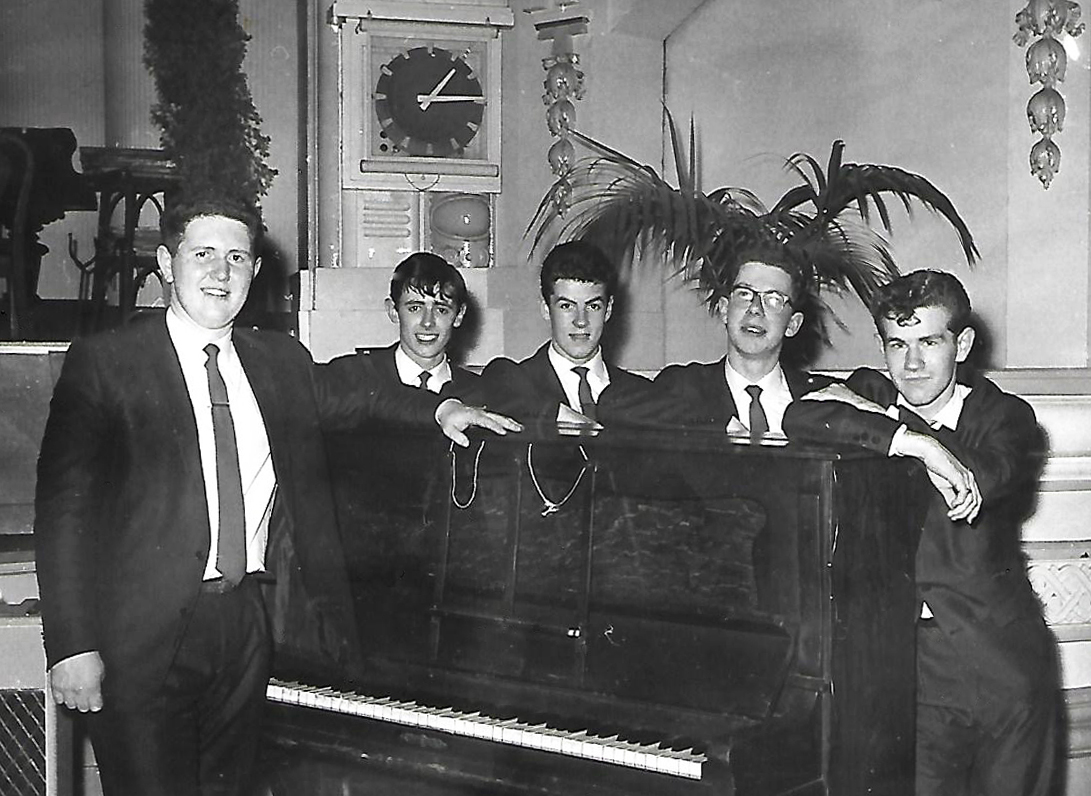 At one stage the singer left forcing the band to become an instrumental group, playing mainly covers of hits by the Shadows. After a while the band recruited another singer named Neville McKittrick. They also replaced the guitarist with Iain Mccallum who had at one time played in bands with Hilton Valentine and Tappy Wright (ex-Wildcats).

The Invaders began accepting bookings from Stan Henry an agent who also owned and ran the Cellar Club in South Shields. These bookings took them farther afield than the coast to village halls around Northumberland and County Durham. This led to bookings at bigger venues such as Bishop Aukland Town Hall, the Roxy Ballroom, Blyth, the Coop hall in Stanley and Hirst Central in Ashington.

The Invader’s big break came in November 1962. Malcolm Forster, the band’s bassist, had a girlfriend who worked as a secretary for a Newcastle entertainment entrepreneur called Ray Grehan. Amongst other things, Ray Grehan was co-owner of Newcastle’s Club a’Gogo along with Mike Jeffery. At the time, the Club a’Gogo was in a state of transition. The club was originally opened as a jazz venue but was veering towards pop music and rhythm & blues. Mike Jeffery wanted a band for the Club a’Gogo’s unlicensed Young Set (formerly the Latin American Lounge) to provide dance music for the teenagers who packed out the place.

The Ray Grehan connection gave the Invaders an opportunity to audition before Mike Jeffery. Throughout the audition Mike Jeffery, who was a staunch jazz fanatic, never showed any sign that he liked either the band or their music. Nevertheless, they were offered work at the club on condition that they added a saxophone to their line-up. The band promptly found a sax player named Barry Richardson and so their regular booking at the Club a’Gogo began on 28th November 1962. 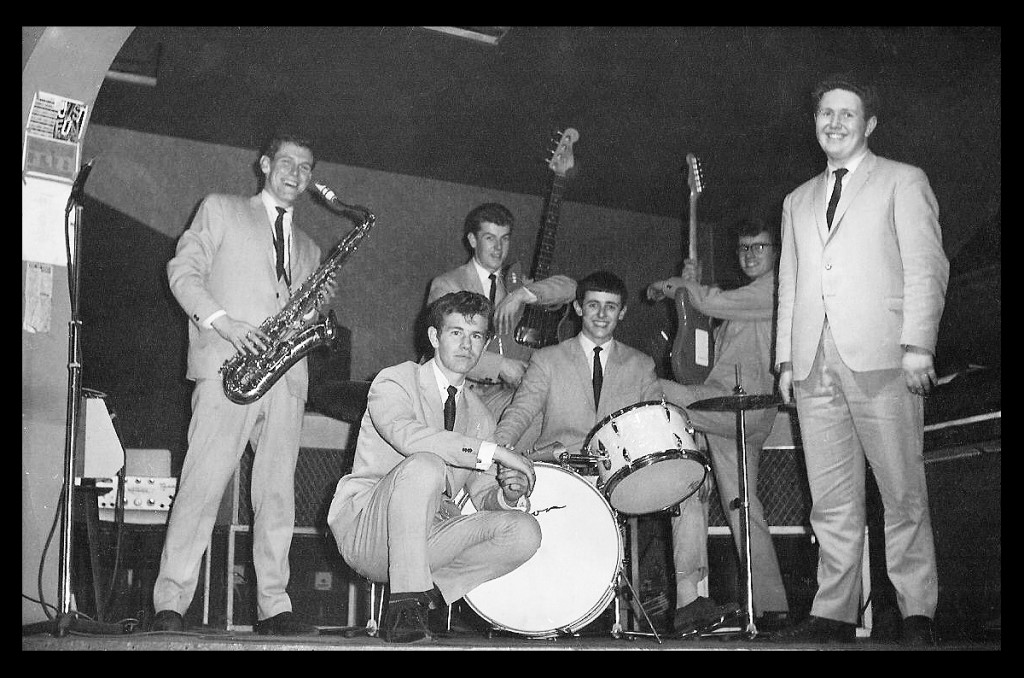 The Invaders with the addition of sax player Barry Richardson

As well as the gigs at Newcastle’s Club a’Gogo, the Invaders were paid a weekly sum to appear at two other clubs owned by Mike Jeffery and Ray Grehan – the Downbeat in Newcastle and later, a second Club a’Gogo situated in Whitley Bay. Although Mike Jeffery was providing the Invaders with regular work, the band was by no means exclusive to him. The Invaders was given the freedom to take other bookings as long as they didn’t clash with the Gogo/Downbeat gigs. The band continued to take booking from Stan Henry at the Cellar Club in South Shields and various village halls throughout the northeast.

The Invaders was a popular band with the teenagers who frequented the Gogo’s Young Set in 1963. Although the band members would probably have preferred to play rhythm & blues music, it was their choice of current chart music that kept the dancers happy in the Young Set. When Mike Jeffery and Ray Grehan opened a second Club a’Gogo at Whitley Bay on 16th August 1963, they chose the Invaders as the opening band. 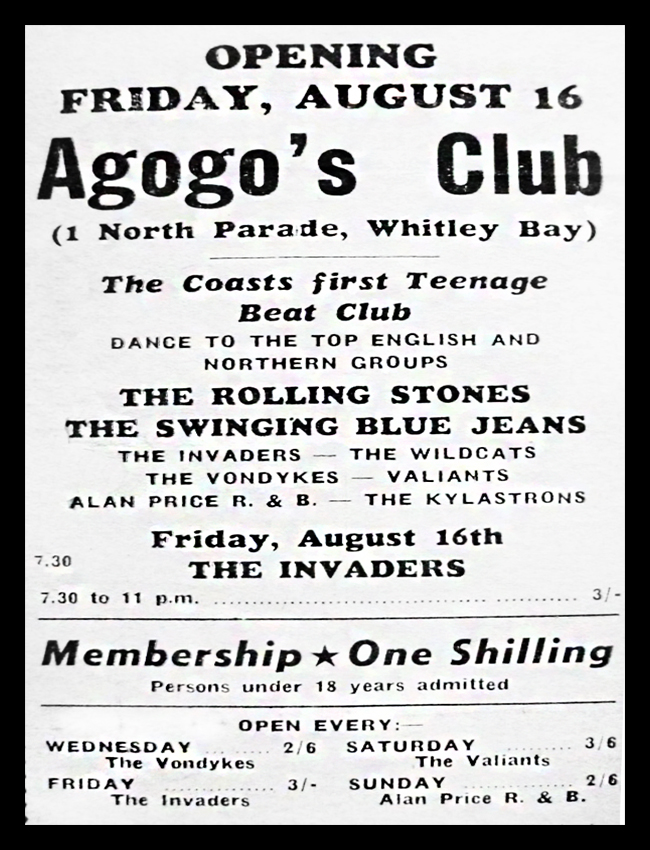 The Invaders hey-day was undoubtedly the period when they played to packed crowds in the Club a’Gogo’s Young Set in 1963. However, during the period the band was together between 1962 and 1966 various line-ups of the Invaders appeared at many other prestigious venues in the northeast; venues such as the Mayfair Ballroom, Newcastle City Hall and the Majestic Ballroom. The last Invaders gig advertised in the local press was on 29th July 1966 at Sunderland’s Locarno Ballroom. Here’s a selection of adverts featuring the Invaders: – 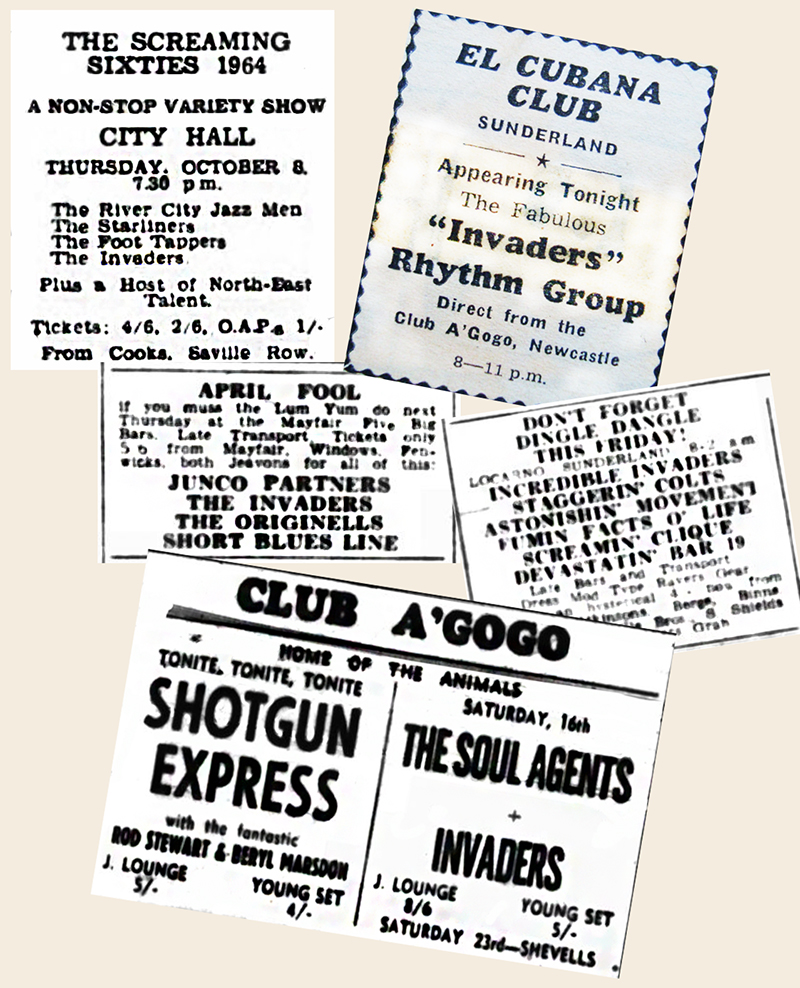 Finally, here’s the only known recording of the Invaders. The song, “Living In The USA” features the vocals of a young lady called Val McKenna, the sister of the band’s guitarist.