In the sixties there weren’t many Newcastle bands that made it to the top. After the Animals in 1964, there was a long gap of 6 years before Lindisfarne achieved chart success with their second album, ‘Fog On The Tyne’. Lots of individual musicians from the Newcastle area have found fame and fortune but famous Newcastle bands were thin on the ground.

That’s not to say that there weren’t good north east bands around in the sixties that deserved to make the big time or, indeed, tried to make a go of it. After the Junco Partners took over the Animals residency at Newcastle’s Club a’Gogo, a lot of people expected them to achieve the same success as their predecessors and be the next band from the city to hit the charts.

Then there was the Sect. Bands that make it to the top usually have more than just musical ability. They often have at least a couple of members with charisma and good looks. Back in 1964 and 1965, Newcastle band, the Sect had their fair share of both. The band built up a great reputation in the north east and had a large following of mainly female fans. They played at the best venues in the city, such as the Mayfair, Majestic, Club a’Gogo and the Quay Club. They also played at the el Cubana and Blue Note in Sunderland, the Cellar Club in South Shields plus other venues all over Northumberland and County Durham. 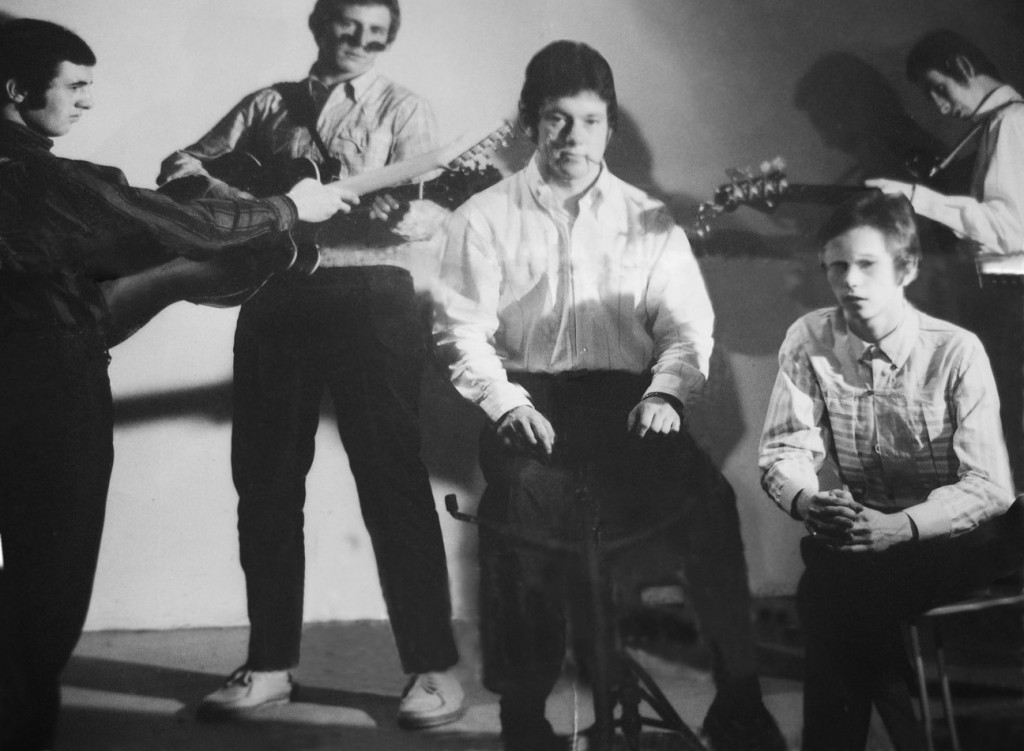 The roots of the Sect lay in a band formed in 1963 by guitarists Alan Atkinson and Steve Gatiss plus bass player Dave Stubbington. Mel Mason (vocals) and Ian Pringle (drums) joined the lineup and the band started performing under the name of Tony King and the Chessmen. After a while, Mel left leaving the band to continue as the Chessmen. The band had a busy schedule playing all over the north east, sometimes doing 5 or 6 booking a week.

In 1965 the Chessmen became the Sect. Later that year there were several changes to the lineup including the departure of drummers Ian Pringle, his replacement Dave Burn and bassist Dave Stubbington. 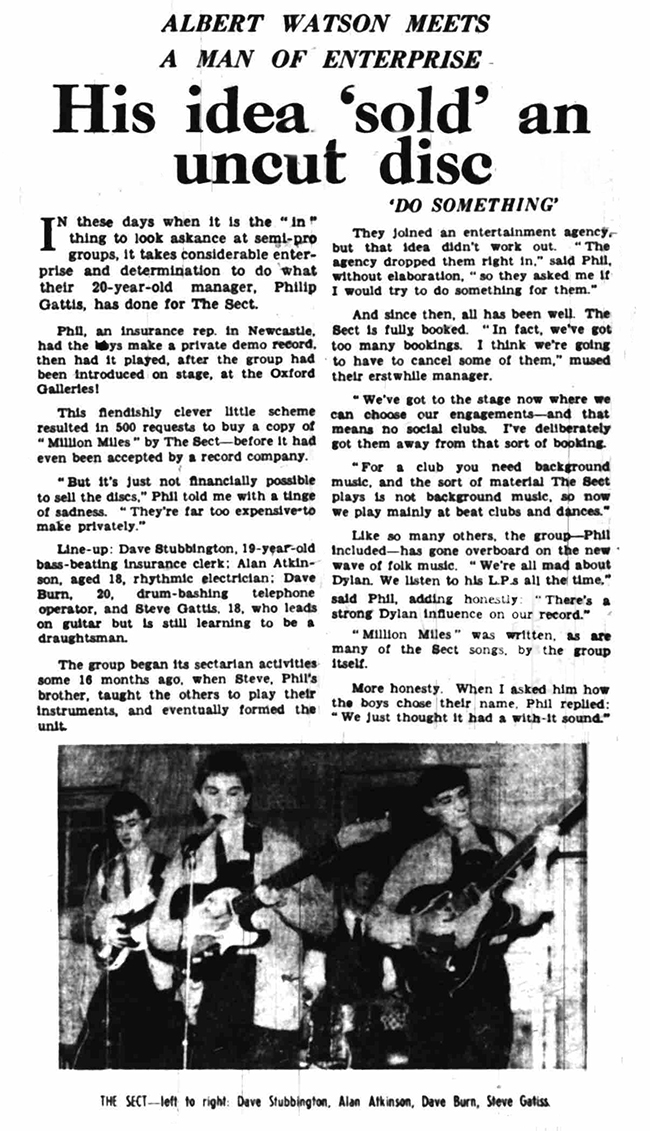 From the Newcastle Evening Chronicle 8th May 1965

The next Sect lineup was – Brian Short (vocals), Alan Atkinson (rhythm guitar), Steve Gatiss (lead guitar), Tom Duffy (bass) and Dave Corker (drums). Unlike the Junco Partners who played mainly blues based material, the Sect were a bit more mainstream. They covered music that was good to dance to and that was popular in the clubs and ballrooms. A few songs I can remember them doing were; Land Of A Thousand Dances, The Way You Do The Things You Do and It’s All Over Now Baby Blue.

Adverts for Sect gigs from 1966

The Sect got their shot at fame and fortune in 1966 when songwriter and producer Tim Rice saw the band performing in the north east. The band was invited to a recording session at the Abbey Road Studios in London by Tim Rice who, at the time, was a producer for EMI. They recorded an upbeat version of Bob Dylan’s ‘It’s All Over Now Baby Blue’ and ‘Walk Away Renee’ which had been written and recorded by the American band the Left Banke a year earlier but had not charted in the UK. In the event, neither track was released by EMI. The Sect with Brian Short on the left 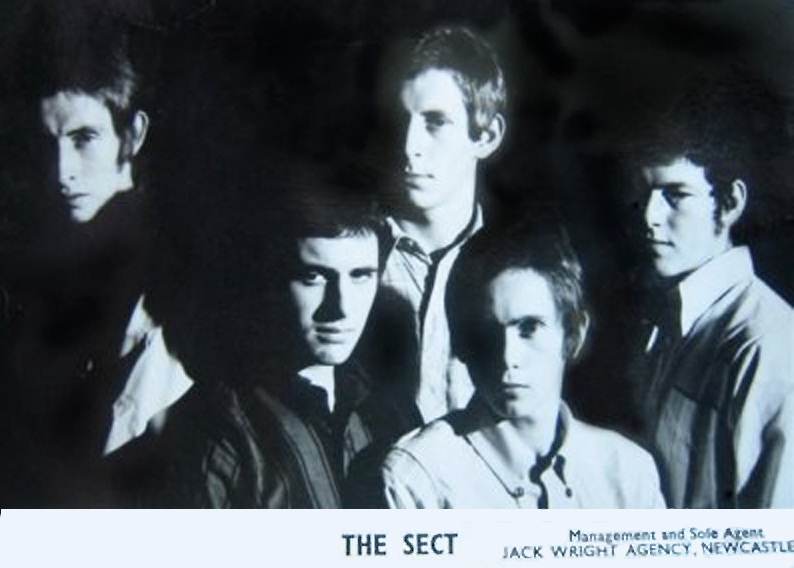 The Sect (originally with the Jack Wright Agency)

Around about the same time, the Sect came to the attention of Ivan Birchall, the manager of the Majestic. The band had supported Unit Four Plus Two at the “Maj” and had impressed Ivan with their performance and the reaction they got from the crowd. This gig was followed by more at the Majestic supporting the likes of the Kinks, Hollies, Small Faces, Georgie Fame and many more. Ivan became the Sect’s manager and left the Rank Organisation to set up his own business in the city. The business became the Birchall Entertainments Agency. 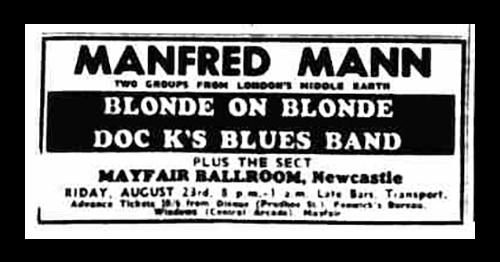 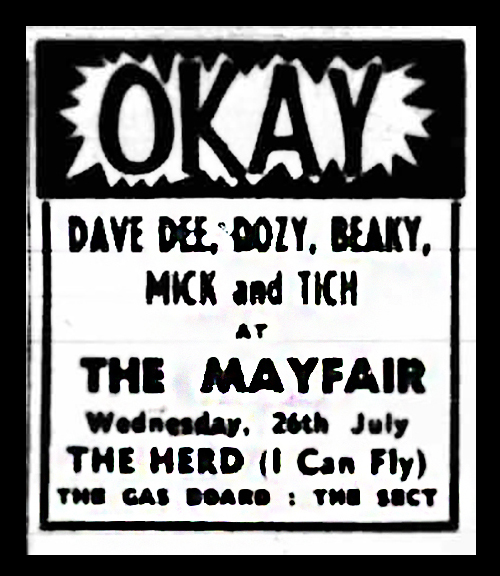 The Sect’s closest rival in terms of local popularity was another Newcastle band, the Elcort. The Elcort, who were also aiming for national recognition, released a record on Parlaphone in 1966 – ‘Tammy’ and played several gigs at London’s Marquee club. The band was fronted by Glyn Sadler and included a couple of other well known north east musicians, Kenny Craddock (keyboard) and Paul Nichols (drums). In 1967 Brian Short left the Sect to form a band called New Religion with Kenny and Paul from the Elcort. The effect of this move was that a number of bands on the books of the Birchall Entertainments Agency, including the Sect and the Elcort, disbanded or reshuffled their personnel and reformed with new identities. The new Birchall ‘A’ list bands to emerge from the melting pot were the New Religion, Funny Farm, Pleasure Machine and with their name unaltered but with different personnel (including Glyn Sadler from the Elcort) – the Sect.

After New Religion, vocalist Brian Short went on to join London based Black Cat Bones, whose line up had included Paul Kossoff and Simon Kirke before they left and joined Free in 1968. Brian sang on the band’s 1969 album ‘Barbed Wire Sandwich’ which was released on the Decca Nova label in November 1969.

You can listen to ‘Anything for a laugh’ here: –

Anything For A Laugh – Brian Short

The Sect continued to perform locally for another four or five years with the odd change in personnel. Although some individual members went on to successful careers in music, the Sect never quite made it on a national level as a band. However, they continue to be one of the best remembered bands to have performed in the north east music scene in the sixties. 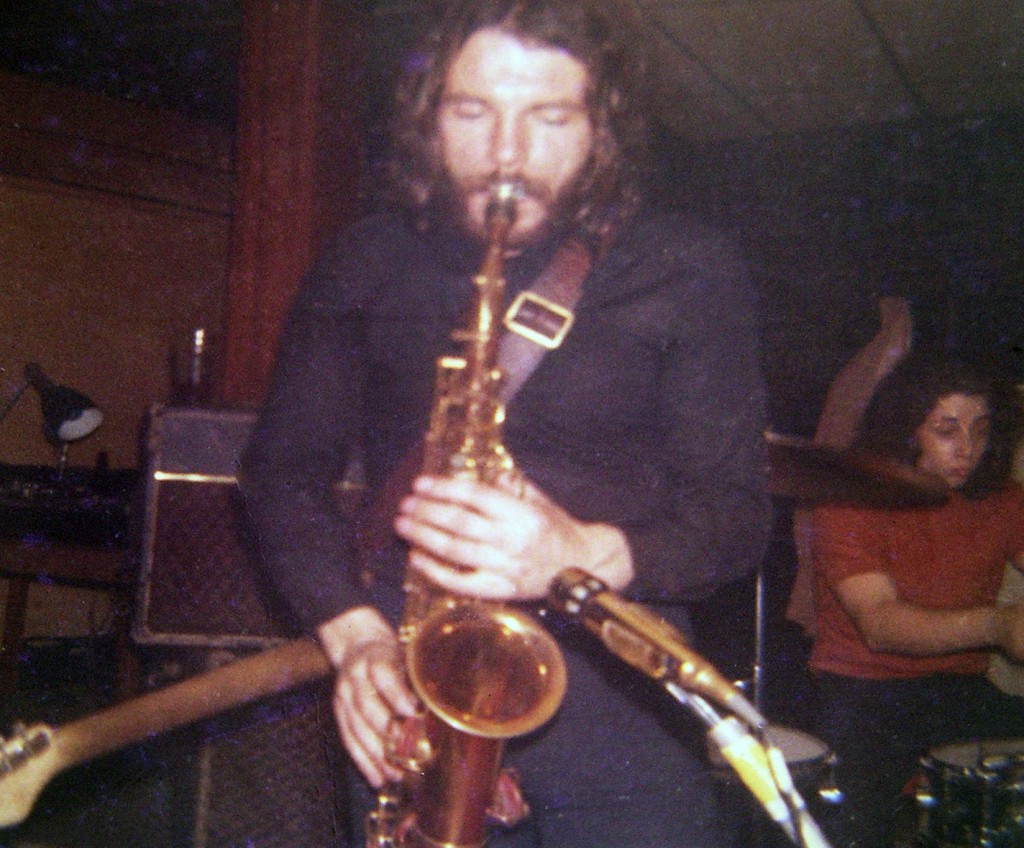 Vocalist/saxophonist Eddie Martin with the Sect in 1972