A while ago I received an email from Arthur Renwick, a north east guitarist who played in local bands in the late fifties and early sixties. Arthur reminded me that there was a very active music scene in the north east prior to the Beatles era and wondered why there was nothing on Ready Steady Gone about it.

The answer is really simple – this site is about my own experiences of the north east music scene which started around 1965. My knowledge of anything prior to that is very limited. Arthur has kindly filled me in regarding some of the groups and venues he knew from the fifties and sixties. More about Arthur’s band days below. 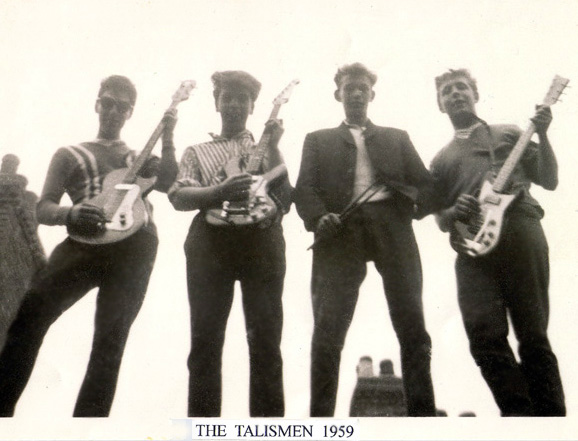 Arthur (far right) with the Talismen in 1959

While I was thinking about music in the late fifties, I started to wonder what or who back then influenced young people to start playing guitar or bass. It must have been a lot different to the time when I started to play music around 1963. By then the Beatles had left their mark and had been the inspiration for many people to go out and buy a guitar, bass or drum set. Those who persevered with their choice of instrument and had achieved a reasonable standard by the mid sixties had probably forgotten about the fab four and were emulating other great musicians. By that time there were lots of excellent bands in the charts and playing live music at clubs and concerts all over the country. So why choose to play the guitar in 1958 or 1959? Budding musicians from the previous generation had grown up in the big band era and were more likely to have taken up the saxophone or trumpet.

At the time Arthur started to play in bands, the UK charts were dominated by American artists; mainly solo performers or vocal groups Rock and roll had emerged a couple of years earlier with Elvis Presley and Bill Haley and UK acts like Tommy Steel, Marty Wilde and Cliff Richards started to appear in the charts from 1958 onwards. There were also some skiffle and jazz groups in the top twenty but still there weren’t that many iconic guitarists around to influence people. 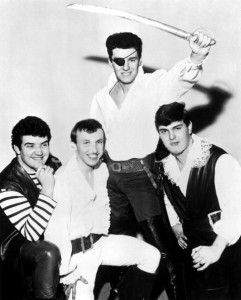 Johnny Kidd and the Pirates

US instrumental acts like Duane Eddy, Johnny and the Hurricanes and the Ventures had been appearing regularly in the UK charts. In fact, it was Duane Eddy and the Ventures that were the influences for Arthur’s guitar playing. However, it wasn’t until the summer of 1960, when Cliff Richards’ backing group the Shadows hit the charts with “Apache”, that thousands of teenagers decided they wanted to take up the guitar and become the next Hank Marvin. At around the same time, Johnny Kidd and the Pirates hit the UK charts with “Shakin’ All Over” and showed the world what could be done with a catchy guitar riff. Johnny Kidd and the Pirates were the first English rock band with a vocal/guitar line-up to achieve a number one hit in the UK. ‘Shakin’ All Over’ has been covered by numerous performers over the years and is still played by bands all over the world.

Things started to change over the next few years. After the Beatles first release in October 1962, more and more UK bands started to appear in the top twenty and by the mid to late sixties charts hits by UK artists outnumbered those from the US. Here’s a comparison of UK and US top twenty hits from 1959 to 1967: – 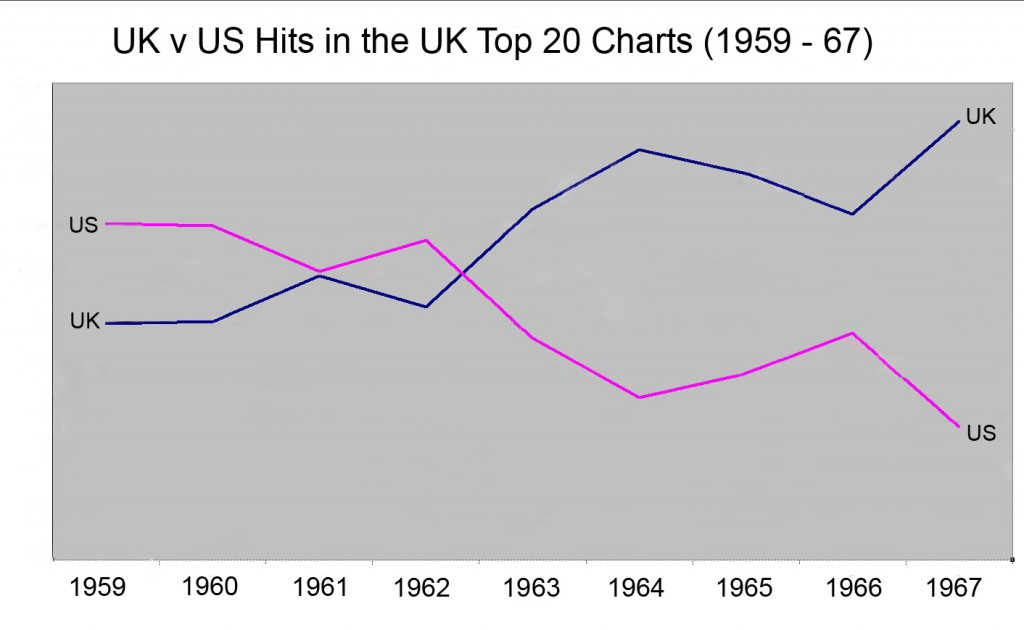 So from about the mid sixties onwards there has been no shortage of great bands and musicians to influence young people wanting to play music. Anyway, back to Arthur; in his own words, here’s his recollections of the north east music scene in the late fifties and early sixties: –

“I started to play guitar in local groups in the late fifties in Wallsend, my home town. There are two photos of me on Vintage Sixties Live: one in the Talismen the other in the Scimitars with the New Vikings. This photo was taken in a rock competition held in the North Eastern Marine Social Club. We came second and the Vikings came first. There were about fifty groups that took part and later that month there was an even bigger competition held in the Roxy in Blyth. The Sixteen Strings won that one. They were a Shadows type of group. The Scimitars were a six piece group with tenor sax. We played Johnny and the Hurricanes type material plus rock and roll. We used to open with the “William Tell Overture” but I guess people liked the Shadows. 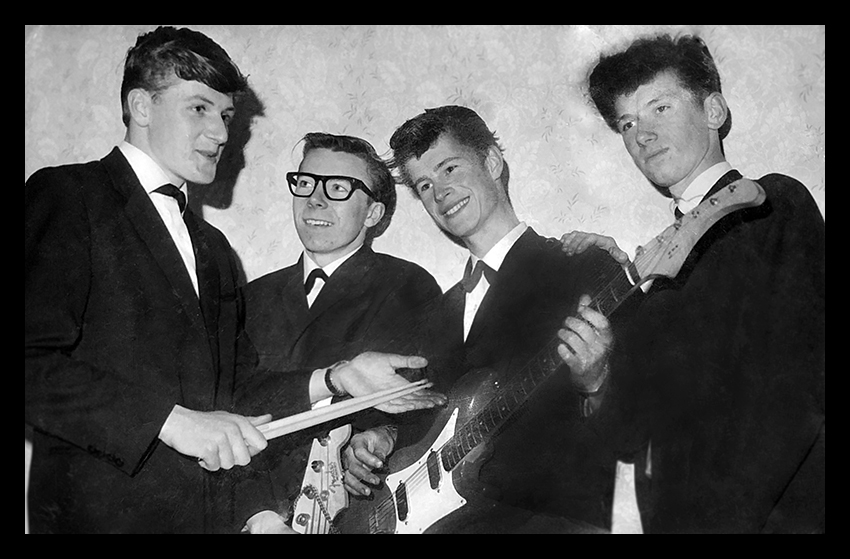 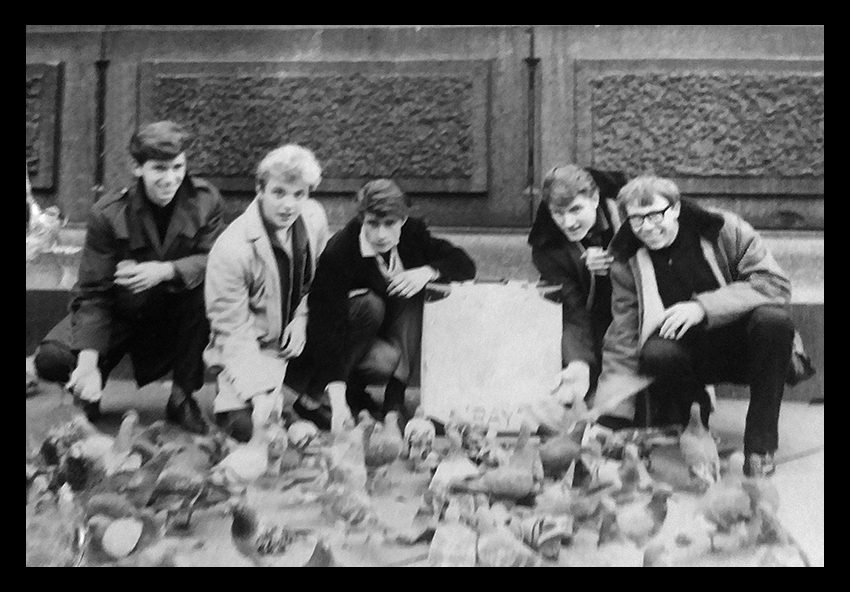 “Anyway getting back to the very early sixties; the main groups of that time were the Gamblers and the Delemeres who I thought were great. The Gamblers had a tenor sax and played the stuff I liked. The guitarist was Jimmy Crawford, the sax was Ken Brady and the bass player was Blackie Samuel. They went on to back Billy Fury in 1964. The next great group was the Delemeres who went to work full time in the Liverpool Majestic in 1961. Need I say any more – yes, they worked with the Beatles lots of times. The bass player Dave McGiven is one of my good friends and he tells some great stories about that period. 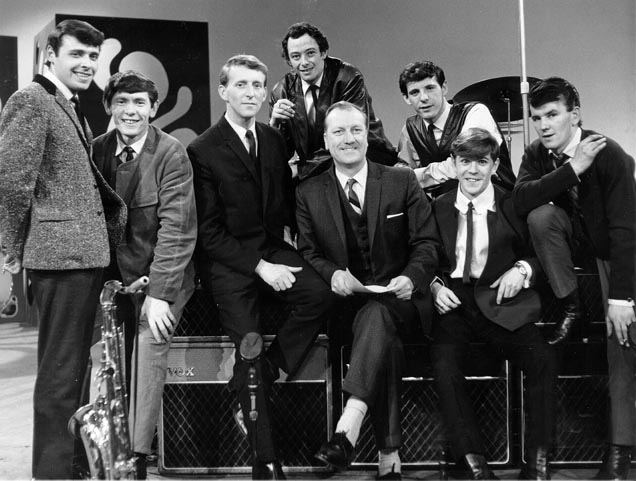 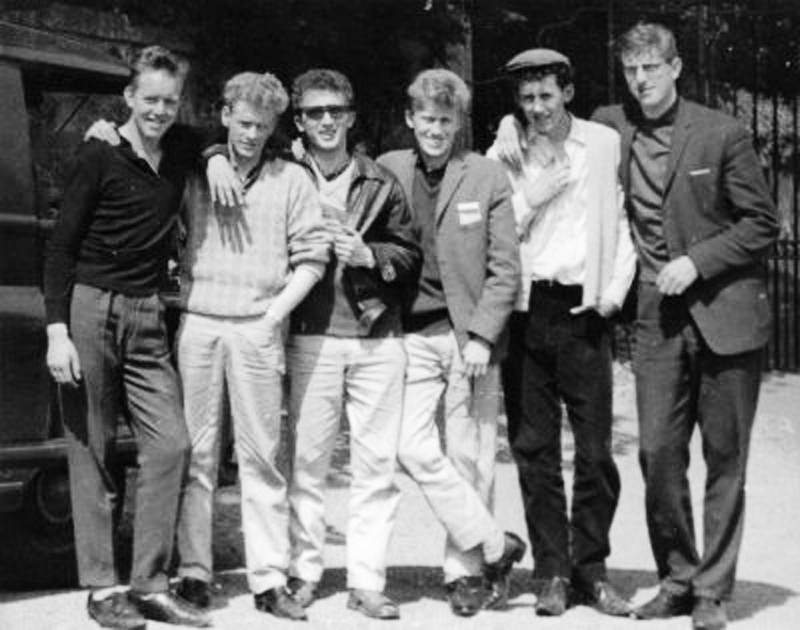 “One of the really early groups that I got to see was Johnny and the Cadillacs about 1959. I saw them at the MEM in Wallsend, a popular venue back then. They were another great group; the lead guitarist was called Pussy Muse who later played guitar for Screaming Lord Sutch. The drummer was called Keith Robinson who had a drum shop on Newgate Street, Newcastle. “On a Saturday night around 1960 me and my group of mates would go to the Hotspur dance hall in Whitley Bay to watch The Wildcats, another top north east group. The star was Hilton Valentine, a really good guitar player even then and a really nice lad to know. His step brother, Harry Dixon played bass, Tappy Wright played rhythm and Ronnie Stephenson played drums. They had the coastal area all stitched up. I know that there are people out there who will say that local groups from Durham were better but these groups were at the top. I knew lots of great individual guitarists, bass players drummers.”

Thanks very much to Arthur for his memories. If you were around in the early sixties and want a reminder of some of the other bands that were playing at that time, it’s well worth visiting Vintage Sixties Live.